Looking at paintings made by Martin Driscoll is like connecting with relatives in Ireland. Even if you’re not Irish or haven’t ever been there.

Mr. Driscoll’s paintings reveal an intimate view of rural Irish life and the people who live there. At the heart is Mr. Driscoll’s desire to portray a slice of Irish life he believes will soon disappear.

The portraits capture each person in an unguarded moment in the midst of an ordinary day. There is little background to distract the eye away from the subject. Most appear in front of a wash of abstract color.

There are exceptions: People can be found sorting potato seeds amid a mound of potatoes, sitting among metal milk containers or whittling on a wooden bench. In his paintings, people fish, dig for clams, clasp a prayer book or have hands filled with wheat. Each makes the mind muse about what was happening before and what’s likely to happen later. In all of them, Mr. Driscoll strives to capture the depth of the Irish people, he said.

Scenes of Ireland are cut from a different cloth. These paintings give the viewer a secret vantage point to watch village gatherings, a bucolic field where horses graze, a spontaneous game of road bowling or a granddaughter grasping her grandfather’s hand on the walk home. Like the portraits, the scenes unfold mid-action with the story’s beginning cloaked and the ending yet to unfold. 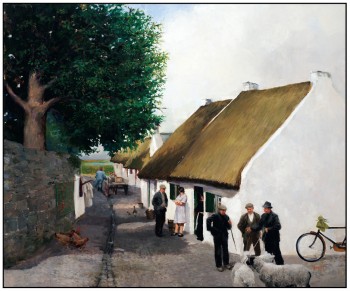 “I do like to have a story in my paintings,” Mr. Driscoll said. “Sometimes the story is a look on someone’s face. All of my scenes have people in them…I think there’s a true depth to a lot of Irish people—a longing for something that they don’t readily show. They’d rather tell a funny story than show the pain that they’re having. I decided to paint the people in their surroundings and show others the country that they see.”

Some stories will be revealed on March 20 during a St. Patrick’s Day Benefit event. Mr. Driscoll will give a talk about his Irish roots, the inspiration for his paintings and the stories implied. The benefit will feature live music, a solo art show of Mr. Driscoll’s artwork, food, drink, an Irish dance performance and more. It will be held from 7 to 10pm at the Viking Culinary Center in Garden City. It’s sponsored by the Sunflower Fine Art Gallery, Mirrors & Picture Framing of Garden City. Proceeds benefit The Andy Fund, which aims to combat brain tumors.

Mr. Driscoll’s paintings combine images from historic photographs (from around 1840 through 1910) with faces of the relatives Mr. Driscoll remembers on his trips there. The Long Island native first visited relatives in Ireland with his Irish-born mother in 1996. Already a painter, he set up his easel and painted en plein air. It struck Mr. Driscoll that his artistic calling was to portray the culture of Ireland.

“I decided right then that I had to record the dreams and stories of Ireland,” he said. “I’m not a writer—I’m an artist so my paintings are the way I can preserve the stories and people that live there.”

Mr. Driscoll’s art can be viewed at http://www.martindriscoll.com or http://www.sunflowerfineart.com. For benefit information, call Sunflower Fine Art at (516) 747-7406. Admission ($30 in advance and $40 at the door) includes a raffle to win a framed signed print of Mr. Driscoll’s work.