Want a really authentic ethnic restaurant? If you can find it, Caldas Café Restaurant and Bar, a newish Portuguese restaurant and bar is a possibility. You’ll be told it’s in New Hyde Park and although it has a New Hyde Park zip code, it’s actually in Garden City South. Calling this homey little nook is not advised. We did and found that one-third of the time nobody answered, one-third of the time there was an answering machine and the other third we spoke to one or two people with a very limited command of the English language who weren’t much help when it came to directions. 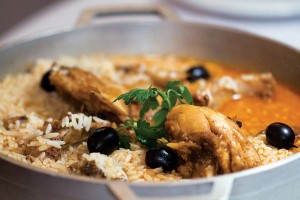 Which brings us to the benefits and deficiencies of authenticity. Caldas is a very modest venue with a cooler in the dining room, artificial flowers on each paper and cloth covered table, bare floors, two televisions featuring Portuguese programming and a bar room about the size of the dining room. Its food ranges from rough at the edges peasant fare to some interesting ethnic possibilities. Totally, I’d categorize it as being equivalent to Portuguese pub grub with the same unevenness and inconsistencies often encountered in pubs. Service is sweet and accommodating but green and clueless with the added burden of major language problems.

Our Portuguese-born waitress never cleared plates, told us the seafood soup was creamed (it wasn’t), indicated a complimentary after-dinner drink was gin, at least that’s the way it sounded (it wasn’t), and simply couldn’t find the English words to describe many dishes.

Let’s start with the benefits at Caldas. Chewy, dense cornbread from the nearby All Nations Portuguese bakery is terrific. Recommended appetizers include a humongous plate of flaming chorizo sausage that was enough to fill four hungry diners and fresh, shells-on grilled shrimp with a touch of garlic was also a bountiful serving. Although we got no real answer about why appetizers were priced much like entrées, the reason is they’re just about as big. Skip soups, there are two: A weak, watery green soup, probably kale based, with two or three spicy sausage slices and that seafood soup which has an off-putting fishy flavor. Among the other deficiencies encountered were a limited menu with many items unavailable—no clams, (a major ingredient in Portuguese cuisine), four out of seven desserts missing and a deviation in the menus given to various diners. Both the descriptions of dishes and some dishes themselves varied from one to the other. 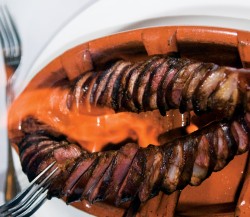 Appetizers and desserts, the beginnings and endings, were better than main courses. Bacalhau à Caldas was a bony fried cod with nicely sautéed onions and potato crisps that weren’t crisp. Pork with spicy sauce was tough and a kebab with pork, beef, chicken, onion and peppers was tasty but also tough. A special described as rabbit stew that proved to be more large pieces of rabbit in a sauce passed muster as did its rice and salad. But the great gobs of French fries that accompanied it were limp and soggy.

Our spirits improved at dessert time. A big slice of pudin flan draped with caramel sauce was first rate, chocolate mousse delivered desirable texture and flavor and something listed as sweet cookie, actually layered cookies and pudding in a sherbet glass, was a refreshing, pleasing surprise.

Despite language difficulties, the nice people at Caldas aim to please though they don’t quite have their act together at this point in time. We wish them well in the future. 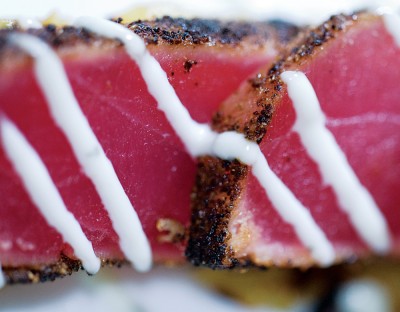 Upon being seated on a recent weeknight we were offered $6 martinis as well as $3 well drinks and told that the karaoke and dancing would begin at 8pm. Signs that proclaim satellite TV games and an extensive bar menu await the patrons who down these drinks.

Despite clues to the contrary, Brookwoods is not a motorcycle gang hangout. It is a serious restaurant that serves simple, well-executed, solid dishes.

Chef John Scunziano, who was the Executive sous chef at Prime, 75 Main and the Seafood Bar, before coming to Brookwoods, has constructed a menu heavy on American comfort food with some continental and Latino touches that is, considering the atmospherics, much better than many patrons might expect it to be. Both the à la carte offerings and the commendable, bargain priced three-course fixed price menus ($21.95) are packed with hearty fare like gumbo, lentil soup, New England clam chowder, beef and pulled pork sliders, meatloaf, chicken and dumplings, a ¾ pound burger, steaks, pastas, seafood, apple cobbler, New York style cheesecake and Mississippi Mud Pie.

Brookwoods, where the Tuscany House had been, is named for a nearby historic site called Brookwood Hall. Known as Stellerwerf’s Lake House in the 1880s, it featured home cooking and comfortable rooms. In the 1940s, Brookwood Hall became an orphanage and today is a town of Islip art museum. Brookwoods Restaurant and Lounge is a neat, spiffy, though basic spot with red and white napery, shiny bare floors, a pressed tin ceiling and sepia turn-of-the-century photos of nearby Bay Shore and Islip.

Dishes on the Sunday-through-Thursday price fixed menu were the equal of those on the à la carte bill of fare in both quantity and quality. Among them were knowingly seasoned lentil soup with ham that packed a soothing, deep flavor; a fresh, crisp, diverse (though slightly too cold) house salad; a rich, moist, flounder Newburgh featuring broiled fish; and an opulent seafood, sherry cream sauce accompanied by good, crisp, green beans and a rustic, robust turkey pot pie baked and served in a big black skillet. The two desserts sampled were a respectable Amaretto crème brûlée and a vivid, tasty apple cobbler that was a tad too hot, topped with a generous scoop of vanilla ice cream.

The à la carte selections sampled were a husky gumbo, dense with chorizo sausage slices, shrimp, ham, chicken and rice; a classic version of Caesar salad with house made herb croutons and two meat centered entrées—a petite (8-ounce) filet mignon that was tiny, tender and terrific and the Vanderbilt, a sprawling veal chop with a big protruding bone, touched with a butter, lemon and caper sauce. The veal chop, the julienned vegetables that came on most plates and the jumbo baked potato with the steak all needed salt to bring them to life.