Steve Holley, drummer extraordinaire, has provided the melodic backbeat behind such rock luminaries as Paul McCartney, Elton John, Joe Cocker and Ian Hunter. With over two hundred studio albums on his resume and countless memories of frenzied arenas still echoing in his head, Steve has expertly navigated his drum kit across the entire music industry universe. This Londoner by birth who calls Manhattan his home and Montauk his sanctuary reveals in a rare interview for Pulse readers his private thoughts and emotions regarding his life in music and what it takes to make the stars shine. 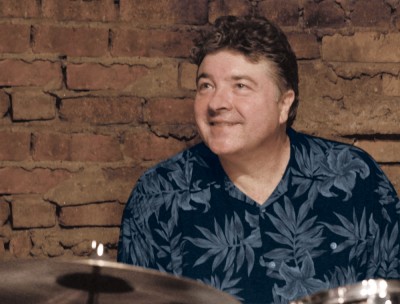 What are your earliest memories regarding music? I remember my mother’s singing and my father’s saxophone playing. Dad led a big band and my mother was the vocalist. My next-door neighbor was the drummer and I became infatuated with the drums. // At the age of nineteen you were with Kiki Dee who was a huge star in Europe. What was that like? Playing with Kiki was great and the first time in my life I realized I might actually turn my love of music into a career. // Following this you recorded with Elton John and were simultaneously asked to join Wings. What was that decision like? Elton John is one of the most amazing talents I have ever played with. In August 1977, while I was still with Elton John, my own group Vapour Trails was signed by Warner Brothers and I was also asked to join Wings. Leaving both situations to work with Paul McCartney was difficult, but inevitable. // You had the rare privilege of playing Beatles songs live with Mr. McCartney. What were the pressures inherent to that situation? One irreversible fact of youth is that you feel capable of anything, fearless. I felt privileged to say the least. // What did you learn from Mr. McCartney about being a person? Sir Paul McCartney taught me many things. One was to trust my instincts. I also remember him saying, “If you can’t hide it, paint it red.” He has given my career longevity just by our association. // When you were with Joe Cocker, your band along with several other acts played at the Berlin Wall while it was literally coming down. That must have been an intensely emotional show. We were invited to play a concert for the first 10,000 people arriving from the DDR, but by the time we took the stage, there were thousands more inside and outside of the stadium. A truly breathtaking experience. // Did any particular song resonate with the historical moment at hand? When we began to play the last song, “With A Little From My Friends,” a roar from the crowd threatened to raise the roof. // What did you learn about music from Mr. Cocker? I just loved the fact that Joe gave himself so completely to every performance. // Another musical landmark you contributed to was Julian Lennon’s debut record Valotte. This was recorded not long after John was killed. What are your memories of that? Phil Ramone invited me to play on that album. The first time I heard Julian’s voice, I was stunned by how much it sounded like John’s and I forgot to play. It was fantastic. // You played at the White House at a Special Olympics benefit with a long list of headliner’s that included Stevie Wonder and B.B. King. That must have been amazing? Yes, I love America and to accompany those artists for that cause at the White House and to shake Bill Clinton’s hand was just incredible. // Can you provide a sense of the emotional backdrop for this concert? For example, were there any visceral experiences you can share related to the buildup to the show and was there any rehearsal time or was it all improvised? The concert for the Special Olympics at the White House in 2000 came just before Christmas. I was the house drummer, and as such was fortunate to perform with not only B.B. King and Stevie Wonder, but also Darlene Love, Macy Gray, Wyclef Jean, Sheryl Crow and John Popper. We rehearsed the day before the concert, which happened to be the day of Al Gore’s concession speech, and this was also the day of his Christmas party. To help cheer him up we were invited over to play, and along with Tom Petty and the Heartbreakers and Jon Bon Jovi, we did just that! What a night and the beat goes on! // In 2003, you put out the well received solo album Reluctant Dog. What was that process like? An obstacle was writing my own songs and then comparing my efforts with the composers I had worked with. I would feel extremely insignificant. I thought they would just be demos for other artists to cover and not my album. // You have been with Ian Hunter for over twenty years. Do you have a favorite song from your new CD Man Overboard? I must say I have had so many great times with Mr. Hunter. I love the new album. “Way with Words” is one of my favorites. // Could you elaborate on why the East End of Long Island is so special to you? Twenty-eight years ago, I landed in America for the first time, and from JFK I thought I was being taken to Manhattan for a Wings related meeting, but was instead taken to Amagansett. I have loved the East End ever since.