I’m perplexed by the intense response to the revelation that Tiger Woods has been having affairs. Indeed, until the tragic Haitian earthquakes, Tiger gossip dominated the media. It seemed that America was getting off on Schadenfreude, taking joy of the suffering of others. Tiger jokes ran through the Internet, the glossies had a field day showing pictures and confessions of his putative girlfriends, and TV had smirky interviews with some of them.

The French, on the other hand, have a very different attitude towards Tiger’s escapades. Their President, Mitterrand, had been quite open that he had a mistress. Indeed, at Mitterrand’s funeral, the fact that both his wife and mistress were present was hardly noteworthy in France. The French attitude seems to be: “What’s the point in becoming rich and successful if you cannot have affairs?” Years ago, I watched wives of professional basketball players being interviewed, and one question was about the opportunity for hanky-panky when the players were on the road. One wife answered, “They’re men!” and the others assented in a resigned way.

I was in a jazz club in New Orleans when Joe Montana entered. I was amazed how many attractive women hit on him. To his credit, he politely declined all of them. I then became amazed that I was amazed. Women are attracted to fame and that fact motivates men to become famous. Although I am not a Freudian, I think Freud did a service of proselytizing how basic sexual motivations are. Freud, in fact, thought the basis of all motivation can be reduced to sex. Overstated, yes, but perhaps Tiger’s affairs (and Clinton’s and Governor Sanford’s and Reverend Haggard’s, etc.) remind us to recognize the reality of how powerful a motivator sex is. 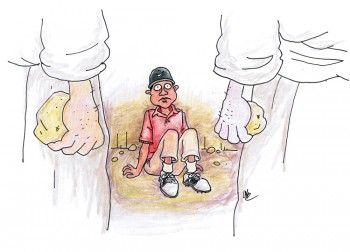 The Schadenfreude that Americans expressed toward Tiger was enormous. Although Tiger’s public image was squeaky clean, we all know that public image is a mirage. Unlike Clinton etc., Tiger was not an especially polarizing figure. He was respected for his prodigious skill on the links and his personal involvement with charities. Schadenfreude indicated the latent resentment that people have for success. Yet, many Americans understand the hypocrisy of his critics. They know that if they were on the road with an empty bed, they could easily succumb to the same temptations. Clinton’s popularity was at an all-time high during the Monica impeachment hearings, with many Americans critical that important national interests could be subverted by his private life. He was clearly lying about the affair, but gentlemen are not supposed to kiss and tell. Meanwhile, Gennifer Flowers got off easy and not only did she knowingly have an affair with a married man, but she advertised it!

Public figures, with some exceptions, are compelled to present a fairy-tale image of their private lives. We, correctly, have no idea about Tiger’s private relationship with his wife, except that they are an attractive interracial couple. They may have many hidden conflicts or even private “arrangements” that allow outside sex. Obviously, their marriage was not the public idealized one. Are there any ideal marriages?

My wish is that Tiger go right back to what he does so brilliantly—playing golf. I predict he will be supported and applauded overwhelmingly for being the best golfer in the world today. I have a fantasy image of Tiger, when savagely questioned about his sex life asking the reporters, “How many of you have had affairs?” I anticipate a quiet room. Certainly some people will condemn Tiger and snicker, but most will realize that humans are fallible. More importantly, his private life is simply his business. Schadenfreude should be replaced by understanding.