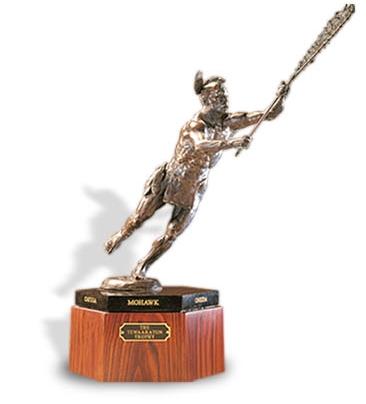 Every year a gearthy list of the nation’s top collegiate lacrosse players are presented to the media to suggest who might win the Tewaaraton Trophy as the nation’s best player when the award is presented over the summer. And every year, there are plenty of Long Island natives who earned there way onto the “watch list,” as hopefuls to possibly with the award.

“The committee has done an outstanding job at selecting the top contenders across the country,” said Robert Sweeney, President of the Greater Washington Sports Alliance. “This year’s list represents 35 institutions, over 13 conferences encompassing students from 14 states, Canada and Australia, so if this is any indication of what is to come, I believe we are in store for an electrifying and intense season ahead.”

The award will be presented on June 3rd at the Smithsonian National Museum of the American Indian in Washington, D.C.

Sorry, no guesses or suggestions about who will win – it’s too early to say. However, there are some interesting Long Island names on the list, including Jeff Cohen, who was a stud at Syosset, Collin Finnerty, who was the center of the Duke sex scandal three seasons ago, Shaylyn Blaney, who had an outstanding career at Ward Melville and Shannon Smith, who holds many Long Island records from her days at West Babylon.

Here are the names of Long Islanders on the watch list: