That thud you heard over the weekend? No, not the body blows landed in the war between ABC and Cablevision. I’m talking about the sound of the Long Island men’s college basketball season coming to an abrupt end.

Stony Brook, Hofstra, C.W. Post, Old Westbury and USMMA each lost in postseason play over the span of 24 hours. And yet to dwell on the losses would miss the point. Each school laid the foundation for strong runs in 2011.

USMMA (24-5) lost in the second round of the NCAA Division III Tournament on Saturday night, falling to Franklin & Marshall, 73-64. It was the best season by the Mariners since the 2003 team also reached the NCAA Tournament. And when you consider three of the top four scorers return, led by former Holy Trinity guard Jon Snead, the Mariners look good.

Stony Brook suffered a deflating loss on Sunday in the semifinals of the America East Tournament. The Seawolves could not overcome an early hole and fell to Boston University, 70-63, in Hartford. The Seawolves (22-9) are not done yet. By virtue of winning the regular season conference title, Stony Brook will get an invite to the NIT. And considering where the program was just a few years ago, reaching the postseason is quite a feat for coach Steve Pikiell and Co. He’s got the program headed in the right direction. 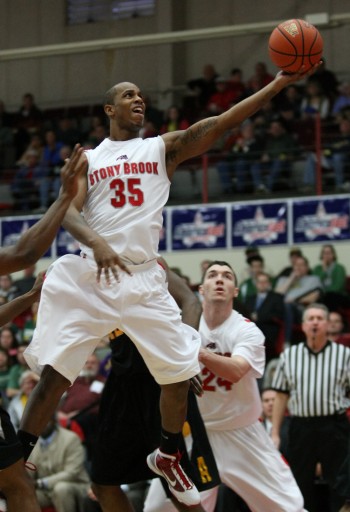 Hofstra played heroically against second-seeded Northeastern Saturday night in Richmond. Yet the Pride lost, 74-71, in double overtime in the quarterfinals of the Colonial Athletic Association Tournament. Junior guard Charles Jenkins, the CAA player of the year, led the way with 24 points. Hofstra (19-14) had won 10 of its last 11 until Saturday. An exciting cast returns in 2011, led by the explosive Jenkins. So expect the Pride and coach Tom Pecora to build on its strong finish.

Perhaps no team faced a more agonizing end than C.W. Post (23-6). The Pioneers fell in the title game of the East Coast Conference Tournament on Sunday, losing to Bridgeport, 70-61. Not only were the Pioneers denied a repeat, but were shut out of the NCAA Division II Tournament and saw their 43-game home winning streak snapped. Ouch! Like the aforementioned programs, coach Tim Cluess has a great core returning. So look out.

Top-seeded Old Westbury (21-8) lost in the semifinals of the ECAC Metro Tournament on Saturday, dropping an 88-81 decision to Baruch. That came on the heels of a tough loss to Purchase in the title game of the Skyline Conference Tournament one week earlier. Despite the rough landing, the Panthers are sure to bounce back under the direction of veteran coach Bernard Tomlin.

Five programs. Five losses. Yet there are plenty of positives to salvage from the wreckage. This was as thrilling a college basketball season Long Island has seen. But believe me, even greater things await in 2011.