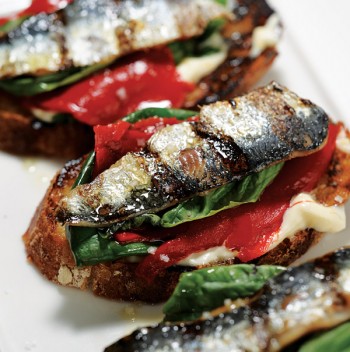 The last meal I ate at the late, lamented Seafood Barge at the Port of Egypt Marina, near Greenport, was the best I’d ever had there. It was prepared by Noah Schwartz, a young (31) chef from Nassau County who had just returned to the Island after seven years cooking in California’s wine country. Recently, Mr. Schwartz did something that many observers considered, well, unprecedented. He opened a restaurant on the sleepy, nearly empty East End in February and he did it in cold, snowy Greenport on the North Fork, an area without the glamour and traffic of the Hamptons.

Noah’s, where The Frisky Oyster Bar had been, is a cool, convivial emerald green spot with fish prints on the walls, globe lighting above and a Manhattan milieu throughout. When I visited in early March about a month after it opened, Noah’s was a booming, bustling, crowded, upbeat success. The summer people will soon discover what the locals already have—Noah’s is a deservedly hot, happening kind of a place.

The focus here is on the 15 small plates priced from $6 to $12 rather than the 5 full plates ($15 to $26). Diners who desire diversity and variety should target the small picks (it’s possible to sample two of them for the same or less cost than one full plate). Yet, if it’s quantity you’re after, go for the much larger portions. Either way, you will probably be rewarded with sophisticated, creative fare. 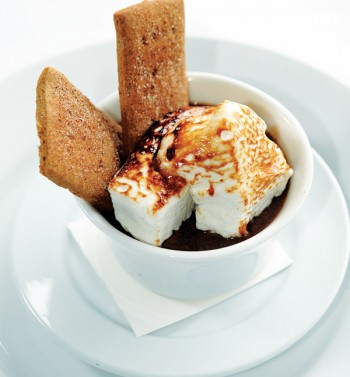 Actually, our meal began with neither. Rather we sampled five accurately billed “tastes” at $3 and $4 a throw: A rich, full of flavor duck liver mousse; a roasted garlic clove squeezed onto bread; crab stuffed deviled eggs that proved to be a good idea; chickpea hummus that would make a Greek restaurant proud; and a diminutive, tangy, one swallow barbecued oyster.

Among the small plates, only the meaty, tender pomegranate glazed baby back ribs disappointed. They had scant glaze and even less flavor. Best among the little guys was a generous, inspired pairing of Crescent Farms barbecued pull duck and smoked cheddar polenta that melded marvelously. Other small plate treats were the crispy Tasmanian red crab tacos packing assertive taste and some welcome snap, rarely encountered, grilled sardines presented with tangy lemon aioli, basil and piquillo peppers that provided a refined and tasty simplicity, and two good, but very tiny, warm lobster rolls enlivened with garlic butter and shaved fennel that didn’t quite justify their ($12) price. A baby beet salad that was ordered made it onto the bill but not to the table.

It was one of just a few rough spots and kinks. Among them were two unsuccessful requests for salt (there was none on the table), the delivery of the wrong wine (it wasn’t even the right color), and the bumping and jostling we got at our middle of the room table. Finally, when the attractive bar and dining room is crowded, Noah’s is as loud as a boxing match. Oh yes, don’t expect bread, there was none.

The only full plate we ordered, beer battered fish and chips was a mixed bag. The fish was fresh, the batter light and its accompanying thin french fries, remoulade and cole slaw first class but the fish cried out for seasoning, for salt.

Nick & Charley Steak House is more noteworthy for what it isn’t than for what it is. It is not a fortress, stand-alone colossus as are Tellers, Bryant and Cooper, and Peter Luger’s. Unlike its competitors, it’s an unpretentious venue of bare floor and butcher-block tables and, best of all, it is by steak house standards, modestly priced.

A quick glance at the menu for steaks might cause some diners to disagree with that last observation. The prices seem to be very much in the steak house bracket, in the mid to high thirties. But at Nick & Charley, those prices include either the soup of the day or a Caesar salad and vegetable and potato accompaniments. Whereas at most steak houses diners get just the steak and perhaps a piece of parsley for that price while paying à la carte prices for everything else. Another deviation from the steak house norm is the absence of Charley. There is no such person here. Only Nick and his name is really Nico. But there is veteran talent on tap at Nick & Charley. The chef Joseppe hails from the well-regarded Café Picasso as does one of the waiters.

The soup of the day, when we visited, was split pea, a bowl not a cup of an excellent brew packed with carrots, potatoes and flavor. Likewise the Caesar salad choice was a good one, excellent tangy dressing and homemade croutons made it a winner. A jumbo lump crab cake appetizer (at $11.95) accompanied by sprightly greens and tasty tartar sauce was lightly cooked and first class in every way. However, a special of escargot, though generous with a centerpiece of fresh spinach, cried out for garlic, butter and taste of any kind. 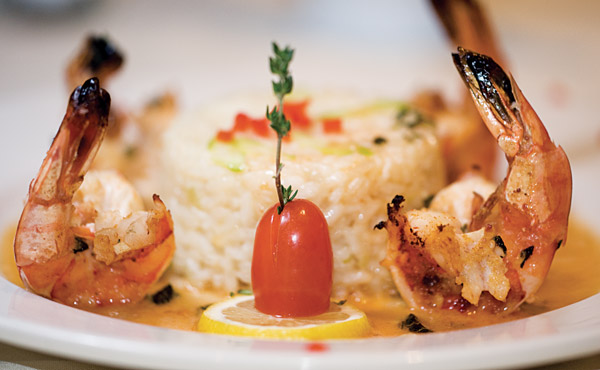 A number of the non-steak entrées scored highest. A simple, half broiled chicken ran with juices and was especially tender. The single cut, loin lamb chops were plump, moist and tasty. The prix fixe dinner of which they were a part offered two chops but actually there were three on the plate. Those chops served with potato croquette and broccoli; preceded by the Caesar salad and followed by a decadent chocolate mousse cake cost $28.95 on the prix fixe dinner that is served every day of the week at different times.

The two steaks sampled, one listed on the menu as single steak with no clue as to what cut it was (sirloin) and the rib eye both boasted big time mineral flavor but were anything but buttery tender. And the rib eye, which is always fatty to a degree, was excessively so. However, the portion size for both was generous resulting in bags to tote home. Side dishes too gave a good accounting of themselves (although one diner neglected to remind her waiter to bring both the baked potato and broccoli she ordered). Yet that baked potato, fresh crisp broccoli and potato croquettes received nothing but praise at our table.

Desserts too received no complaints. The New York cheese cake was standard stuff but nothing to complain about. That chocolate mousse is actually a chocolate mousse cake rather than a bowl of that decadent dessert but it’s the best sweet. The Bourbon pecan pie served as it should be, slightly warmer than room temperature, satisfied its devotees and the apple strudel, that should have been a little warmer, was a gargantuan hunk, most of which went home with the steak and lamb chop leftovers.

Nick & Charley gives off a nice, warm, welcoming feeling; there are candles on the tables, pictures of old New York on the walls and a diverse bread basket to occupy patrons while they make their menu choices.