They were a year away, not to be taken seriously. In the grand scheme of Division II baseball, the Golden Lions of Dowling were too young and too inexperienced. The expectations were modest, the pressure was off, but just when they had been written off, they made history.

For the first time in the program’s existence, Dowling won the NCAA Northeast Regional and reached the Division II College World Series. It did it with three freshmen in its starting rotation and with underclassmen up and down the lineup. The situation they’re now presented with contrasts greatly to that. The pressure’s back on. They’re not just hoping but they’re expected to get back.

Head coach Chris Celano has all the tools he needs—virtually everyone who rode the magic carpet last year, which from a coaching standpoint can be viewed as good and bad.

“Confidence is very close to laziness sometimes,” said Celano, who garnered numerous postseason coach of the year honors. “That’s not the case with these boys. You don’t want to go overconfident and you don’t want to get too down on yourself. I think they’ll handle it.”

On the Long Island landscape, Dowling might not have the allure or the number of scholarships found at Division I programs Stony Brook and Hofstra or, further west, St. John’s, but the Lions’ postseason track record can’t be ignored. They’ve gone to regionals in six of the last eight years, and three times since Celano took over the reins in 2005. It wasn’t until last year that the Lions finally reached the College World Series. For good measure, they upset top-ranked UC San Diego in their first game before dropping their next two.

Nobody saw it coming. Nearly everyone played better than anticipated. Right-hander Gabriel Duran “couldn’t have had a better season,” said Celano. As a sophomore, he dazzled with a school-record 10 wins and 1.30 earned run average en route to First Team All-America accolades and a spot in Sports Illustrated’s “Faces In The Crowd.” He tossed a complete game gem to beat the Tritons in the playoff opener.

It was that kind of year for Duran and the Lions—magical—so much so that they want to relive it this spring. 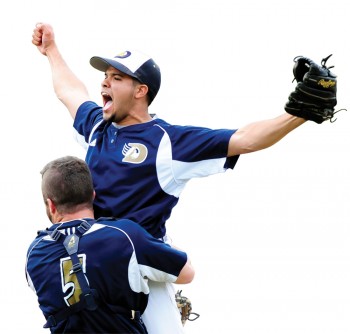 “Once we started to gel, it was a situation where our team just decided they were going to go as far as humanly possible,” Celano said. “The motivation of those 30 guys to just go out and play well every day is something you really can’t teach, no matter how good of a coach you are.”

Duran, a pre-season first team All-American, has a world of talent and even more guts but, at 5-10, is undersized and not necessarily on every major league scout’s follow list. In fact, more than half of this year’s Lions roster stands shy of 6 feet tall. On the recruiting path, it’s the type of talent that Dowling successfully hordes to create a year-in-and-year-out contender in the East Coast Conference.

“With the amount of players on Long Island, upstate, New Jersey, there are enough to go around if you do your work,” Celano said. “We’re fortunate to have a lot of Division I type kids where Dowling was the place where they wanted to be. We’re picking up guys that might fall through the cracks.”

Last season, the peak to this point, may just be a molehill compared to the mountain they hope to climb later this spring. Dowling came into the season ranked 20th in the country in Division II. Aside from their catcher, David Wendt, who was selected by the Tampa Bay Rays in last June’s MLB draft, last year’s nucleus is back. One can’t afford to underestimate them again. Celano already learned that lesson.

“We do bring back an awful lot,” Celano said. “I don’t want to say we’ll repeat, but that puts us in a good position to do that. Still, you can’t play baseball on paper. It’s going to be a challenge.”