Just returned from the Spring Craft Beer Festival at Nassau Coliseum, and I must say that it was a damn good afternoon spent tasting and discussing brew with those who view beer not only as an interest, or passion, but as a genuine, true love. I’ll even further my corniness by saying that this true love could be felt radiating within the Coliseum’s walls on Saturday—a raw, positive energy, or warmth, if you like, that gave the event more of a familial setting than anything. It was as if we were apart of something close, something that mattered.

If you’re waiting for a joke, there is none. I really mean that.

I attended the event with good pal Talal Khawaja, and we got the chance to sample several different breweries for the first time. Some I liked, some I didn’t. However, the definite hit of the afternoon, at least in my opinion, was not from an actual brewery, but a group of local, enthusiastic home brewers.

I’m referring to the Long Island Beer and Malt Enthusiasts, or LIBME, who were pouring samples of twelve self-brewed concoctions that were not for sale, or distribution, but simply offered to enjoy and appreciate. It was a good alternative to have featured at the festival, and it was nice to be able to discuss each beer with the individual who was involved in every single step of its creation. The passion definitely came through from all.

LIBME notables were Frank’s Tripel (Frank Filacchone), Almond Joy (Todd Long), Gravity Check (Chris Kelley’s 9.6% ABV banana blast) and…and…and…BOB RODRIGUEZ’S THE GOODNIGHT K.I.S.S. (King Imperial Sultry Stout). I must repeat the last one mentioned: THE GOODNIGHT K.I.S.S. (King Imperial Sultry Stout). Talk about a really, really good beer. Rich chocolate. Smooth vanilla. I felt like I was drinking beer made by Hershey’s. It was actually my FAVORITE of all the beers I consumed at the festival, so as a result, it is the winner of the Super Neat Beer Adventure, Yes!! Drinkie of the Nightie award. 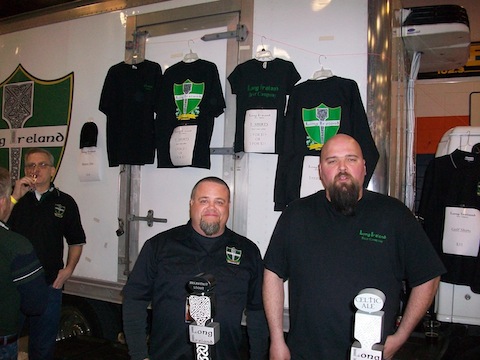 Here are some additional notes from the festival:

– Founders Brewing Company (http://www.foundersbrewing.com) from Michigan made their Long Island debut at the festival, and really brought the ruckus. Like hardcore. Their Kentucky Breakfast Stout (aged in oak bourbon barrels for an entire year) was just indescribable, in terms of how rich and flavorful it really was. Go find some now. NOW.

– Also making their official debut was local Long Island brewery, Great South Bay Brewery (http://www.greatsouthbaybrewery.com). They offered samples of three Bay Brews (Massive IPA, Snaggletooth Stout, Blonde Ambition Ale) and really had a nice crowd gathered around every time I walked by. I didn’t get a chance to talk with Rick, the founder and brewmaster of GSBB, but I’m glad people seemed to enjoy the products. The Snaggletooth was definitely a yummer.

– Dave (Bellport Cold Beer & Soda) hooked me up with the most carb-o-licious pretzel ever. I think the pretzel portion of the piece lasted about seventeen seconds. At least I didn’t eat the yarn, though.

– Dogfish Head (http://www.dogfish.com) were out of their Black & Blue before I could get to the booth. Booooooooooo-th. 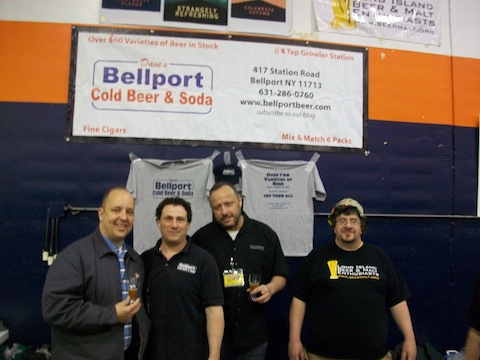 – Long Ireland Beer Company’s (http://www.longirelandbeer.com) Breakfast Stout was my favorite at this past November’s International Great Beer Expo this past November, and guess what? It’s still awesome. Such a session beer. The Ireland dudes mentioned that a dry hop pale ale will be brewed next, so expect that soon.

– The official Super Neat Beer Adventure, Yes!! shirt debuted at the festival (as seen in the picture of me looking frail and deathly ill), and several people had nice things to say about it. Expect an official blog entry this week about its release and how you can pick one up.

Lastly, a special thanks to Lynda and Andy from Starfish Junction Productions/LI Beer Events for organizing this special event. Great job, guys.

P.S. — I deserve props for this weekend. Thursday was spent at Rattle N Hum. Friday was spent at Brooklyn Brewery, where I must have had twenty offerings of their latest Brewmaster’s Reserve, Dark Matter. Then this. I’m tired. Beer is yum. Goodbye.