When Sachem East’s Phil Schaefer scored in overtime to lift the Flaming Arrows past West Islip, 13-12, in boys lacrosse on March 31, it was one of those goals heard round the state. After all, Sachem East had just beaten a dynasty.

West Islip went 22-1 and finished second in the Under Armour/Inside Lacrosse national rankings a year ago. It capped the program’s third state Class A title in four seasons.

OK, it’s way too early to kick dirt on the Lions’ dynasty. West Islip could well be the last team standing eight weeks from now. But it got Jason Molinet and Long Island Pulse thinking about the greatest team dynasties in Long Island high school sports history.

And West Islip doesn’t crack the top 10. Believe it or not, there have been even more dominant teams through the decades. To be eligible, you need to have a state championship on your resume. Sorry, football fans. Long Island doesn’t compete in the state playoffs. So Hempstead’s great run in the 1980s and the sustained success of St. Anthony’s fall by the wayside.

Other great programs, such as Miller Place badminton and Ward Melville girls swimming, weren’t considered, either. In fact, only teams from the modern state championship era (1978-present) made the list. But what a list! Here are our picks:

1. South Side girls soccer (1987-2009): No one can top the Cyclones’ unprecedented domination in girls soccer. They’ve won 15 state titles at two different classifications since 1987, including five of the last six Class A championships. South Side is tied with West Genesee boys lacrosse for most team championships in any sport. Credit Bob Bigelow and successor Judi Croutier for establishing a great team ethic . In Bigelow’s final season in 2001, South Side finished with a 46-0-3 unbeaten streak and a national championship, No. 1 in the NSCAA poll. He went out as national coach of the year too.

2. Ward Melville boys lacrosse (1988-2000): Iconic coach Joe Cuozzo built the program over 37 seasons, winning 700 games and 22 Suffolk, 15 Long Island and seven state titles. He is the winningest boys lacrosse coach in national high school history. But Ward Melville’s run of six state Class A titles in 13 seasons was a magical one in a lacrosse-mad state. The school forced out Cuozzo after the 2006 season, but the coach found a new home at Mount Sinai and led the school to a 2008 state title. Take that!

3. Amityville boys basketball (2000-2003): No boys basketball program in state history has won four championships in a row. Amityville did it with three different Suffolk players of the year leading the way, from Tristan Smith (2001) to Jason Fraser (2002) to A.J. Price (2003-04). In fact, Price (Indiana Pacers) and the Warriors led in the 2004 title game until he fouled out with two minutes left. Coach Jack Agostino put together one great team after another and never let them lose focus. 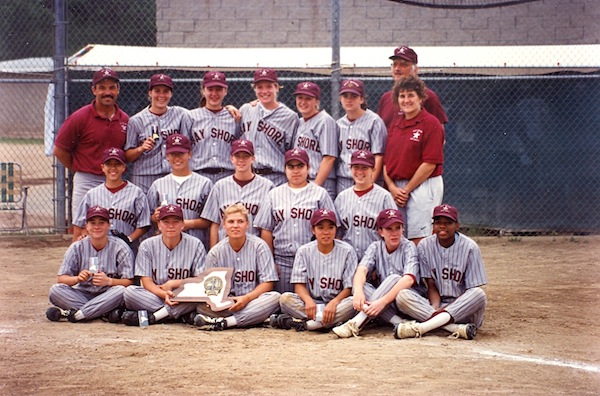 4. Bay Shore softball (1994-2005): Six state Class A or AA championships, highlighted by back-to-back titles and a record 54 consecutive wins from 1994-95. Bay Shore has won 11 Suffolk and nine Long Island titles during the run. Coach Jim McGowan built a dynasty on great pitching and produced 46 All-State players in his 27 seasons as coach. He entered the season as the winningest softball coach in state history with 609 wins – and the team to beat once again. Bay Shore High School went 27-0 to claim the 1995 state Class A softball championship. Photo Courtesy Jim McGowan/Bay Shore High School.

5. Cold Spring Harbor girls soccer (1985-2000): The Seahawks won or shared 13 state Class C titles, highlighted by streaks of five in a row from 1989-1993 and 1996-2000. Don’t sell this small school short, either. Cold Spring Harbor often played up against Class A and B competition during the regular season and more than held its own. Coach Steve Cacioppo has won 17 Long Island titles since he took over in 1983, including a Class B crown in 2008. The Seahawks are alive and well.

6. Garden City girls lacrosse (1995-2009): Ten state Class B championships, including the last four is quite a feat. Coach Diane Chapman has the winning touch. The program has won 14 Nassau and 12 Long Island championships since 1994. Chapman also built a pretty successful field hockey program too, with six state and 13 LI titles since 1991. No Long Island coach can claim more championship hardware. Debbie Russell Masterson was the girls lacrosse coach from 1995-2000.

7. Southold boys soccer (1979-85): Six state titles in a seven-year span? Remarkable in any decade and at any level. Southold coach Bob Feger had one prolific family to thank. The youngest of five soccer-playing brothers, Greg O’Brien (four-year starter from 1982-85) scored 119 career goals, establishing a new state record at the time. He added three more in the 1985 state Class D title game, a 9-2 Southold victory over Section V Angelica.

8. Bridgehampton boys basketball (1978-98): The eight-time Class D champs can claim a unique place in state history because Bridgehampton has the smallest enrollment (often less than 30 students) of any school to bring home a state crown. Carl Johnson played on the first championship Killer Bees team in 1978 (coincidentally, the first boys basketball state champion of the modern era) and coached a three-peat from 1996-98. How impressive is this feat? Only talent-rich Mount Vernon has won as many titles.

9. Hempstead boys basketball (1983-2001): When you say basketball, you think Hempstead. The Tigers won 18 county, 12 Long Island and three state Class A titles from 1983-2001.The school took nine Nassau championships in a row from 1993-2001 and six LI titles in a row from 1985-90. The program simply produced one great talent after another. Coach Ted Adams, in the NYS Basketball Hall of Fame, led Hempstead back to a Nassau Class AA championship in 2007.

10. Carle Place field hockey (1983-90): The Frogs won or shared six state Class C titles, including three in a row from 1985-87. They also won eight Nassau titles in a row. Carle Place coach Gloria O’Connor left after the 1988 season with a 146-18-21 record. She is currently the coach at Adelphi. Ashley Duncan took over at Carle Place and directed field hockey to back-to-back state titles (1989-90). Under O’Connor, the field hockey team also dominated. In the pre-state championship era, the Frogs won 73 games in a row.