Only two days remain before Saturday’s 6th Annual Blue Point Cask Ales Festival (hosted at Blue Point’s brewery in Patchogue, 161 River Ave.), so if you haven’t already purchased your ticket for the event, well, then do it! Do it now!

Just to let you know, I will not tolerate any excuses as to why you cannot attend on Saturday. That means no dead grandmothers, no overbearing work schedule, no term papers, no mowing lawns. Nada. Be there.

Here are some of the breweries scheduled to participate in the festivities:

In addition to what’s listed above, host Blue Point Brewing Company will offer up their own 10th Anniversary IPA inside of the world’s largest cask. Seriously. Here’s a little information about the cask, courtesy of Lynda Calimano (Starfish Junction Productions):

The Blue Point Brewing Company’s cask holds nearly 10,000 pints of beer and, this year, is filled with the brewery’s 10th Anniversary IPA. This American Double IPA is a deep amber malt with notes of deep berry and brandy. The brewmaster’s clever use of European and American hops add some spiciness and mix well with the English, German, and American barleys to make this IPA a true stand-out, worthy of the special anniversary imprimatur.

If you’re not sure what a “world’s largest cask” would look like, the picture below is from last year’s festival. 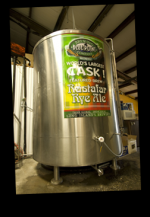 I picture hundreds of hairy, miniature troll-people brewing something like that.

Again, only two days are left before the festival, so pick up your ticket now!