A lot can go wrong when you house swarms of thirsty people under several tents during a Saturday afternoon and fuel them with casks from over 20 different breweries and beer groups.

And that’s not even scratching the surface’s ass.

I could go on for ages and blog pages and ages about what could go wrong at an event like the one mentioned above, but there’s really no need to do so.

Because an event like the one mentioned above DID happen (last Saturday, actually), and not only did it not include any of those “realistic catastrophes,” it went off better than perfect.

The event, obviously, was last Saturday’s (4/17) 6th Annual Cask Ales Festival, held at the Blue Point Brewery in Patchogue. Here’s my rundown of the afternoon’s festivities:

– The World’s Largest Cask, which contained host Blue Point’s 10th Anniversary IPA, was…really, really, really, really, really…large. Yep, busted out the thesaurus for that description. Ha. While not a huge fan of IPA’s, or anything bitter, for that matter, the 10th surprised me with its balance and drinkability. Maybe I should give some more IPA’s a chance? 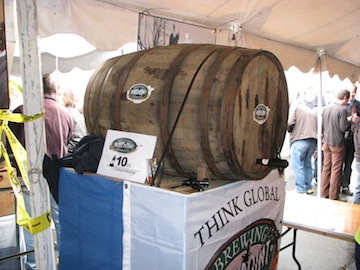 – Speaking of Blue Pizzle, I highly recommend their Cherry Imperial Stout, which I tried for the first time after wandering into their tasting room. I asked the staff why the Cherry isn’t seen as often (or at all, honestly) as their other products, and they cited reasons like popularity and units sold. Damn shame. If you ever head down to the tasting room, make sure you have a glass. Oh, and the same goes for Rye Not, too.

– Good conversation with Edward Cleary, one of the dudes who will be opening Portside Bar & Grille in Port Jefferson within the next few months. Ed is a real passionate guy when it comes to beer, and I predict good things for Portside when it officially opens. Expect a 12 tap system, and some bottles that aren’t found on your typical pub list, as well.

– Bobbique ran out of pretzels before I could place my order. Arg!

– Liked Lou Zollo’s Black Blizzard (a black IPA) at the Brewer’s East End Revival (B.E.E.R.) table. Speaking of B.E.E.R., their 14th annual Brew-Off is now accepting entries through May 8th. I’ll have a blog with more information about the event later this week.

– Once again, the Long Island Beer & Malt Enthusiasts (LIBME) impressed the hell out of me. This marks the second straight event (the first being the Spring Craft Beer Festival that was held last month) where I felt like the group stole the show, both in quality and atmosphere. LIBME favorites of mine were the Stooges’ Smoked Suds, a smoked porter from Frank Filacchone, Todd Long and Bob Rodriguez (who served in Stooge attire and brought great energy to the surrounding area), and Mike Napolitano’s Tailgate Stout. Good beer. Good dudes. What else can you ask for? And no, they’re not paying me under the blog table to say this! 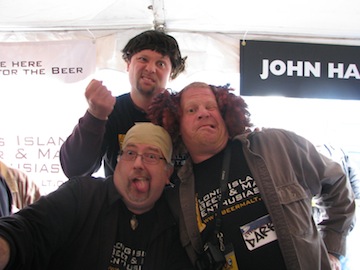 – I limited myself to only one of Brooklyn Brewery’s Dark Matter, the latest from their Brewmaster’s Reserve series. If you remember, I first tried Dark Matter at the brewery’s Happy Hour some weeks back, and before I could realize, one sample became fifteen. The beer is just that good. That next morning, however, not so good. Bad memories.

– Black Duck Porter is my favorite of the three Greenport Harbor brews.

Kudos to Blue Point Brewing Company for hosting a smooth and enjoyable operation. This festival is just another reason why Long Island is the place to be for craft beer events.

Can’t wait until next year! 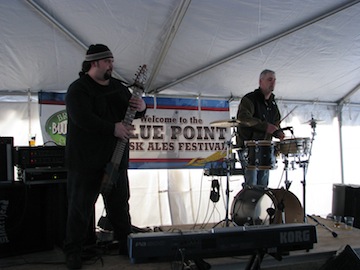