The fertile UK music scene continues to be the spawning ground for great new artists. In some cases, these new artists turn up in the most unlikely places. Verve Records, long the home of seminal American jazz, from big band, to be-bop to cool and beyond, now welcomes the American debut of Brit Findlay Brown. Oddly enough, Brown borrows a great deal from such American music legends as Roy Orbison, Phil Spector and Elvis Presley. Yet, Brown’s main influence is the quintessential band from England, The Beatles. Brown’s album, Love Will Find You (Verve/Forecast), is easily one of the best debut albums of an English artist in years. The album is actually his second solo outing. His first album was only released in the states on iTunes. That first solo album was actually on Boy George’s label More Protein.

Brown now makes his home in New York and talked about his album, his upcoming tour opening for Shelby Lynne and what seems like his favorite subject, The Beatles. Brown described the music on his UK debut album as “heavy electronic and psychedelic.” As for the new album, he said, “Musically this is where I’m at. I’m just doing the music I love. Some people thought it was too much of a drastic change from the last record. Some people thought it might be too retro sounding.” He added, “This is the kind of record I’ve always wanted to make deep down.”

As for the production, the album is one of the best produced to come out of England since Duffy’s debut album Rockferry in 2008. The primary reason for that is that Bernard Butler of Suede produced both albums. As for Butler, Brown said, “He brought a music flair and great arrangement ideas. He was fantastic to work with. It was an absolute delight.”

The album was recorded at Edwyn Collins’s studio, which Brown said was filled with vintage gear from the BBC and Abbey Road. Brown had a chance to work at Abbey Road on string overdubs on his first album. As for the experience of working there, he said, “It was magic. It was a real pilgrimage. It was one of the best days of my life.” 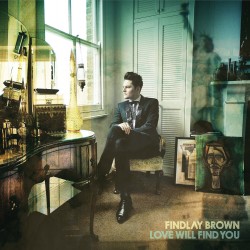 Like the Duffy album, Brown’s album is filled with soaring strings, melodic piano, subtle and varied rhythms and a sound that wouldn’t have been out of place in the late 50s or 60s. In many cases, Brown’s album sounds like the Traveling Wilburys with Paul McCartney guesting, produced by Phil Spector. Brown has gone through many musical phases incorporating a variety of influences before reaching his new direction. Some can be heard very clearly on the new album, but many, while being major influences, are not readily apparent. The big breakthrough, according to Brown, was Electric Ladyland from the Jimi Hendrix Experience. Some other influences were Love’s album Forever Changes, the Brill Building songwriters, the mod scene and more recent fare like the Buena Vista Social Club, Fleet Foxes and many of the alt-country and No Depression-era bands. There is also a very cinematic feel to the album. In fact, that and a Beatles sound very much represent the direction in which Brown is moving. “I listen to more classical music or soundtracks,” Brown remarked. “I’m obsessed with Ennio Morricone. I’d love to do a pop record that’s kind of where Ennio Morricone meets the Beatles…that would be my dream.” Classical music is something Brown wishes he’d discovered much sooner. “I almost wish I’d gotten into music earlier,” he stated. “I’d really like to do classical arrangements. I suppose it’s never too late. It’s something I can pursue.”

Findlay Brown will open for Shelby Lynne on May 10th at The Concert Hall At The New York Society for Ethical Culture in Manhattan, New York.