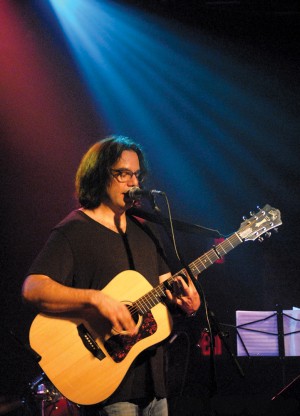 There’s a secret truth unconsciously disseminated amongst most musicians and songwriters—make it early and make it big because the longer it takes to get noticed the harder the road. It’s a small window and many people want to fit through it. It’s not unlike being wild and free and out and about in the world and all those wonderful romantic associations with our fleeting houses of youth that we’ve all felt. Roll the window down, stick your head out and feel the breeze, because that’s what it’s all about.

Along comes Revenge of the Slowpoke, veteran drummer and songwriter Dave Diamond’s most recent release, turning the secret truth inside out. After years of touring and recording with members of the Grateful Dead, The Zen Tricksters, Blow Up Hollywood, Shannon McNally, Jason Crosby and a host of other notable independent artists, Dave has definitely put in his time. But there’s something about Revenge of the Slowpoke that refuses to acknowledge the stereotypes and compartmentalization that come with such a moniker. The music just feels good and urgent and wants the world to hear it.

Diamond himself refers to this new release as “a departure from other records I’ve made,” and talks about situating “pop ditties next to extended jams.” This conscious and deliberate move of integration—perhaps a bit of a surprise to some friends and fans—is more of an earnest tip of the hat to all of his influences than some sleight of hand trick. Not surprising however—if you know anything about Dave Diamond’s work—is the fact that the musicianship on this CD is stellar, polished and full of grace. Dave’s voice is mature and seasoned and, at times, sounds similar to fellow folky soul rocker Jonah Smith. On songs like “Eastern Sky,” there is an exploratory kind of playing reminiscent of Bruce Hornsby’s finer moments. “Closer to You” (which features Donna Jean Godchaux)

and “Concrete and Stone” thump their way into the seat next to you when you’re driving. “Bittersweet,” a personal favorite, shifts genres and explores indie rock territory a bit while maintaining Dave’s earnest and rootsy delivery. Revenge of the Slowpoke is essentially an Americana album that won’t sit still.

It is true that there is something intrinsically beautiful about starting out in the world. But Revenge of the Slowpoke proposes that maybe, just maybe, there is something equally if not more beautiful in sticking it out—and that goes for music and life. Dave Diamond doesn’t have to worry about any codes or secret truths associated with making it in the music business because he already has made it. And it sounds better and better with each listen.