Venue 56 is no doubt a better restaurant than it seemed when I visited on a cold early March Monday night. Located in Hauppauge at Exit 56 off the Long Island Expressway, it’s a sleek, sophisticated spot with a 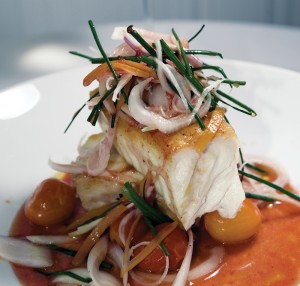 talented chef (Marc Anthony Bynum), a sweet, kind staff and some very good dishes. Yet many of those dishes and wines were unavailable, including the ones I’d been told were the best picks on the menu and it took repeated attempts to find an available bottle of wine. Five whites and five reds along with several dishes had been consumed on the busy Saturday night preceding our visit and Venue 56 was closed on Sunday. Yet, consistency is the mark of a fine restaurant and being able to serve the food listed on the menu and wine list is basic number one.

The Farmingdale born chef earned his deservedly positive reputation during stints at Tellers, Prime, Four Food Studio, Carlyle on the Green and three or four lesser known eating places. Marc Anthony’s skill is instantly evident in his signature, soft, buttery, fall-away house smoked barbecue ribs ($12) with their house made chipotle barbecued sauce and pickled watermelon. There is no better rendition of these meaty monsters on Long Island. Yet, this hefty tapas starter also emphasized the vast differences in size and price from dish to dish here. More typical were the two very tiny, excellent, expensive jumbo lump crab cakes ($10) and the lobster bisque ($8) soup of the day. The first, a couple of diminutive poker chip size crab cakes were tasty filler free pleasures but too tiny to harbor any “Jumbo Lump” crab meat. The smooth, creamy lobster bisque, like a number of other dishes, arrived on a large, eye-catching white plate with a scant serving on it. The soup was confined to a small circular depression in the center of the plate. Better and creamy rich as well was an appetizer of risotto in a truffle mushroom sauce ($14).

Sophisticated spins on standard ingredients (steak, pork chop, chicken etc.) proliferated among the entrées. A thick, easy-to-cut-and-chew double cut Karbuta pork chop ($25) resting on sweet potato purée with brocollini was fine, but its “maple demi glace” instead turned out to be a pool of overly sweet sauce. A crisp-surfaced, juicy, pan seared, roasted chicken ($25) arrived with interesting plate mates like cheddar polenta, olives, capers, chickpeas, cherry tomatoes and baby spinach that gave it a Mediterranean skew. That sweet potato purée and broccolini also came with a large hunk of filet mignon ($34) with admirable Hunter sauce and more flavor than this cut usually yields. A rather ordinary shrimp scampi ($24) was undermined by its lukewarm temperature.

That leaves desserts, which with a single exception are commendable and a wine list that is too expensive. A small serving of brioche donuts ($8) with strawberry and fudge sauces and sprinkled with powdered sugar were warm and wonderful, chocolate cake ($10) sporting creamsicle ice cream, hazelnut krogant and a squiggle of coffee cream was dense and decadent and the V 56 sundae ($12) was a keenly constructed amalgam of warm banana bread, ice cream, hot fudge sauce and whipped cream. But the caramel apple at the base of the tart tatin ($8) was a hard, difficult to penetrate proposition.

The little storefront spot on the corner of Main and Wall Streets in Huntington has changed from film to food. What was a photography store and then briefly a hookah lounge is now a modest south Asian (read 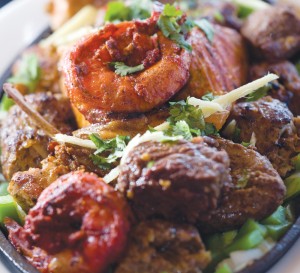 Pakistani-Indian-Persian) bistro. Chef/owner Tavassum Alli, a Pakistani by birth who always had at least as much interest in food and cooking as cameras and film is indulging himself in what was a hobby and an interest. Now it is a vocation. His tiny dining room with windows that look out on the action of Huntington Village sports black table cloths, maroon linens and a few throw rugs.

While its food lives up to its name, dishes here are not blowtorch hot and indeed there is an effort to fine tune it to individual diners. While the fare at Spice Village Grill has its ups and downs, it does provide yet another option for the diners who prowl restaurant-hot Huntington in search of diverse culinary experiences. Among its virtues are affordable prices, exemplary lamb chops, interesting breads and a stew-like okra dish. Vegetarians too will appreciate a goodly number of choices including samosas, aloo tikki, or savory grilled potato patties, aloo naan or Indian bread filled with seasoned potatoes, lentil soup and the garden salad.

Getting back to Spice Village Grill’s virtues, no dish exceeds eighteen dollars and many are priced below ten. That eighteen-dollar dish is the five baby lamb chops that are tiny, tender and tasty. Even if you like your meat rare or medium rare, take the server’s advice and have them well done. Despite the menu’s assertion that they are thick, they are not. But they are juicy, sensitively grilled and too thin to turn them out rare. (Only a whole Cornish hen also achieves that $17.99 level).

The breads of the Indian sub continent are highlights of restaurants that serve its food; indeed they might be the best thing about such establishments. Plain, soothing naan, served warm is offered on a 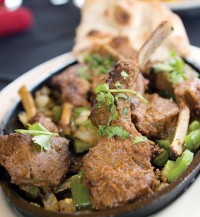 complimentary basis here. That leaves five tandoori, naan, and paratha picks. Order them all in a mixed basket; I did and didn’t regret it. Many such restaurants offer even more bread choices and the Spice Village Grill would be well served if it did. But what they do turn out is first class. First class too was a side dish of stew-like okra. Less impressive was dusty dry chicken tikka or boneless poultry cubes marinated in herbs and spices. A number of other dishes suffered the same fate. Chapli kabab of beef (chicken and lamb are also available) shaped like hamburger lack even a trace of moisture and broke apart to the touch. An appetizer of shami kabab or parched spiced ground beef with lentil also disintegrated easily. Better by far was a special, combination plate of ginger chicken and cardamom chicken. Both of them lightly spiced, moist and cohesive. Those samosas referred to earlier, filled with vegetables, were also airy-light, flaky pleasures.

If you are a devotee of sweet (think baklava) desserts of the Greek-Turkish and yes, South Asian variety you no doubt will appreciate those at Spice Village Grill. I am not. So the sweet dough balls, sugary syrup, rose water, clotted cream finales held little interest for me. The best of the bunch was the milk cake reminiscent of the tres leches dessert found in many Mexican restaurants.

Spice Village Grill is an unpretentious, b.y.o.b., bistro that offers diners another option in one of Suffolk County’s restaurant hubs, Huntington Village.