I need a new heart
Mine’s way beyond repair
I was riding down the freeway, and I didn’t have a spare
I broke down, I’m busted, no love anywhere
Next time around, I have no burdens to bear

When asked how he describes his sound, 23-year-old Phil Minissale says he has “one foot in folk, and one in the blues.” Known as the “Long Island Blues Boy,” Phil has been electrifying audiences with his Piedmont blues finger-style guitar playing since he was 18.

The Saint James-based singer/songwriter released his first full-length, “Home to Me,” in 2008, and it was one of the ‘Top Albums Played’ on the Folk Music DJ’s Chart. Comparisons have been made to Chris Smither, Bob Dylan and John Hammond, for whom Minissale had the pleasure of opening at the Brokerage in Bellmore. And on Friday night, the blues prodigy with the mature, gravelly voice is playing a CD release show for his latest disc, “Young Fool,” which contains 14-tracks about heartache, hope and retribution.

“The songwriting really took off on this record,” says Minissale. “I had a broken heart and had a lot to say. I think it pretty much sums up where I stand as a 20-something in this generation.”

For a smooth bridge between East Coast blues and contemporary folk songwriting, check out Minissale when he performs at Garden Stage in Garden City on May 7th. He will be performing with fellow acoustic folk-blues artist Danielle Miraglia, so look for them to play a couple of tunes together before the night’s end. For show info: http://www.gardenstage.com, Booking: minissalemusic@nullyahoo.com 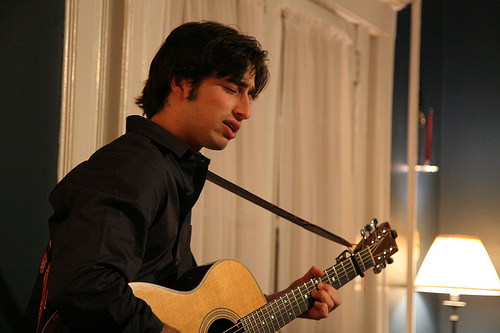