C.W. Post and Le Moyne will face off to decide the national championship in Division II men’s lacrosse, but how these schools got there has generated as much buzz as the games themselves. That’s because lacrosse coaches from the Division II ranks are pushing for an expanded NCAA Tournament field after a one-loss team was shut out of the postseason.

It began on selection Sunday, May 9. Teams across the East Coast gathered to see the bracket announced live by CBS Sports. For Division II, it meant a late night and disappointment for most of the schools watching. The NCAA Division II Tournament in men’s lacrosse extends bids to just four schools. Six get in to the D-II women’s bracket.

This season saw more parity than any previous. There were 13 teams at the D-II level with a .643 winning percentage or better, including five one-loss programs. So someone deserving was going to be shut out.

That left the players huddled together at Mercyhurst College – a small, Catholic liberal arts school in Erie, Pa. – stunned. After all, Mercyhurst went 13-1, a .929 winning percentage, and led D-II with 374 points. The Lakers beat Dowling and suffered their lone loss, 11-9, to defending national champion C.W. Post. Mercyhurst also is the No. 1 D-II team in the latest LaxPower.com poll, a computer rating which includes RPI, strength of schedule and quality wins.

Yet their resume was deemed not good enough by the NCAA selection committee.

“I definitely feel like the bride that’s been left at the altar,” Mercyhurst coach Chris Ryan said. “It’s unfortunately the nature of the beast at this time in Division II lacrosse. The question isn’t why are we left out? It’s more why aren’t we all in?”

Mercyhurst wasn’t alone in asking that question. Long Island schools NYIT (9-4) and Adelphi (10-5) played competitive schedules and won the bulk of their games. They too were denied a chance to compete in the postseason, although they realized weeks earlier an NCAA bid wouldn’t be coming.

“We definitely need expansion,’’ said NYIT coach Bill Dunn, whose program won the national title in 2008 and failed to qualify last season despite a 10-2 record. “The last few years it’s come down to the criteria of a committee. I just think the parity right now in Division II is such that it’s better off playing the games on the field instead of letting a committee decide who is going to get into the NCAA playoffs. It’s absurd to me.”

“We were a couple of goals away from a Final Four bid,” said Adelphi coach Gordon Purdie, whose team lost three games by four goals. “That’s tough to swallow.”
Coaches universally would like to see the NCAA Tournament expand to six (in line with women’s lacrosse) or eight teams. Jeff Jarnecke, assistant director for championships at the NCAA, said the Division II bracket would be reexamined at meetings in July.

One of the proposals for expansion is to realign into two regions – north and south. Three schools from each region would qualify. That wouldn’t really alleviate the problem, according to Dunn. The bulk of the quality lacrosse programs populate the Northeast. So the pool would still be limited. Dunn said a fairer outcome would be two bids from each region followed by two at-large bids.

“There really isn’t a magic number of schools needed at the Division II level for them to look at expansion,” said East Coast Conference commissioner Bob Dranoff, who also is a member of the NCAA Division II Championship Committee. “There are a lot of factors at play when deciding when to expand brackets. I have a feeling it’s going to happen. I just don’t have a timeline on it.”

The snub has forced Ryan to study the case for expansion by comparing it to other sports at the D-II level. He said of 242 baseball teams, 48 get NCAA bids. That’s a 5-1 ratio. The curve in basketball is even less with 64 bids split between 289 teams (a 4.5 ratio). Men’s lacrosse, which has 37 schools and five more on the way in 2011, currently has a ratio of 9.5. And women’s lacrosse suffers from a similar problem.

“Why the inequities?” Ryan said. “It’s unfair. So this isn’t a Mercyhurst problem. This is a Division II men’s and women’s lacrosse problem.”

Jarnecke said one problem unique to men’s and women’s lacrosse is that the sport at the grass roots level is growing at a faster rate than any other. With more colleges starting lacrosse programs, there will be an opportunity to expand the bracket in time. But the time is now, according to people involved with the sport.

“It is time to look at expansion,” Dowling coach Tim Boyle said. “We’re hoping this scenario sparks some conversation with the NCAA. And Division II has come a long ways. I remember the days when there were just two teams. I know they are interested in doing what’s best.”

The controversy this season arose from the competitive nature of the East Coast Conference. Mercyhurst beat Dowling early on. Dowling bounced back to edge C.W. Post. And then C.W. Post beat Mercyhurst. Each loss to a conference rival turned out to be the lone misstep in a great run for C.W. Post, Dowling and Mercyhurst.

But because the East Coast Conference has no postseason tournament, there was no clear way to separate the three teams.

“As much as you can look at Mercyhurst and say, ‘What a shame,’ that conference had an opportunity to create a postseason tournament,’’ Adelphi’s Purdie said. “It gives purpose and meaning for the student athletes to play out the season instead of losing a game or two and wondering what are you playing for at that point.”

Adelphi plays in the Northeast-10 Conference, which has a conference tournament. Interestingly, Merrimack upset Le Moyne, 12-11, in overtime of the Northeast-10 title game but failed to qualify for the NCAA Tournament. There are no automatic qualifiers. Merrimack finished the season 13-3 and as conference champs. But it’s Le Moyne who is still alive and capable of winning a national championship.

In the case of the ECC, the tournament would have at least provided some level of separation among the three one-loss schools. Budget and travel issues have been the main stumbling blocks for a conference tournament in the past, according Dranoff. Yet after this latest controversy, he admits the ECC will look once again at establishing a postseason tournament.

“There are schools which see it as valuable,” said Dranoff, who is headquartered in Central Islip and is all for an ECC Tournament for men’s and women’s lacrosse. “And from a promotional aspect alone I believe it would be an amazing event here on Long Island. The positives outweigh the negatives, but that’s something the athletic directors have to look at.”

Limited postseason opportunities could have a chilling effect on Division II lacrosse in more profound ways, from scheduling and recruiting to the very viability of programs.

It begins with scheduling. Why fill your non conference schedule with teams capable of beating you if you have to be near perfect to be considered for the postseason?

Adelphi’s Purdie said it’s already happening. The decades-old rivalry between Adelphi and C.W. Post was not renewed. These are two teams who have met in the NCAA title game four times. But when Adelphi moved to the Northeast -10 after last season, the two programs were no longer conference rivals. And the two opted not to schedule one another.

“If you schedule a loss, that’s a season-ender,” Purdie said. “So what you find is that various schools won’t play other schools. For instance, Le Moyne can’t find a game down here on the Island. No team will play them because if they lose to Le Moyne, they are out of the Final Four.”

Recruiting only becomes tougher for a program that’s not already on top. What student athlete wants to go to a school with a limited postseason history and only the slimmest of chances of reaching the NCAA Tournament? And when programs can’t compete, they get cut. School budgets are tighter than ever in this shaky economic climate. Administrators are looking for line item expenses to delete. Look no further than Hofstra football, which was axed in December 2009.

“I got a call from a coach this week,” said Ryan, who has become the unlikely standard bearer for expansion after his team was shut out of the NCAA Tournament. “He said an administrator wanted to know if they had just started a sport that they couldn’t compete in. Now they support the sport fully and they are going forward with it. But that’s not the outlook you want a school to have on a program.”

While the fight is just beginning to save – and grow – Division II lacrosse, a new national champion will be crowned on the field this week. The NCAA Division II Tournament kicked off Saturday as C.W. Post beat rival Dowling, 9-8, while Le Moyne downed Limestone, 11-7. The title game is May 30 at 3 p.m. at M&T Bank Stadium in Baltimore. 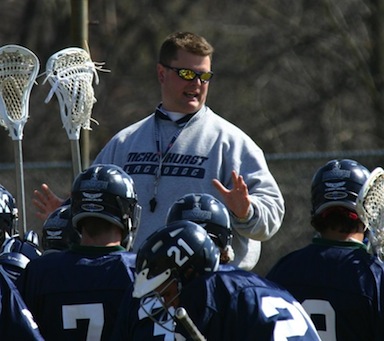