In a previous article, Biting Your Wrist, I discussed some of the problems of dealing with adult children. I pointed out that it is usually better to keep quiet (and this is where biting our wrists comes in) than giving criticism and unwanted advice. This column is the mirror image of that article and may present even more difficult, if not painful issues: Dealing with aging parents. As our population continues to grow, many adults find significant problems as their parents get older. Issues of money, health and—perhaps the biggest—independence, begin to loom. We want to encourage independence, but not at the cost of safety.

Nancy, a lawyer in her early 60s, had a 96-year-old widowed mother, Mrs. Schultz, who was fiercely independent. There were classic signs of deterioration: The house was messy, the bills were not getting paid and, worst of all, her mother occasionally fell and had difficulty getting up. Both Nancy and her mother could afford a housekeeper. Whenever Nancy brought it up, Mrs. Schultz was adamant that she did not want or need any help. Nancy was in a painful quandary; she was constantly concerned about her mother falling, and she felt helpless and frustrated that her mother would not take her advice. Mrs. Schultz, who had most of her marbles, could not be forced to get aid. Nancy had to bite her wrist; in other words, she had to keep quiet. She called and visited her mother more often. Mrs. Schultz valued her independence and, in this case, was right. She continued to live in her own house without an aid until she died at 102. 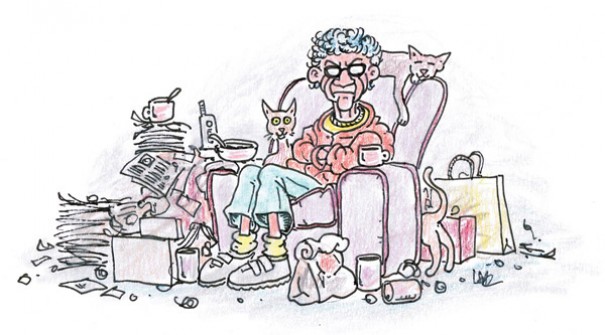 Sometimes rationality is impotent. Patrick, an 82-year-old retired dentist is dying of cancer that affected his brain. He is in considerable pain. His three grown kids want him to have opiates to control his pain, which I strongly agree with. His wife doesn’t believe in opiates and has convinced him not to use them. Their kids are fighting with their mother to no avail. It is painful for them to watch their father in unnecessary pain but they have no control. She cannot be moved. In this case, being right is easy, but their painful choice is to increase conflict with their mother or bite their wrists. They are entitled to a hard bite.

On the other hand, Lilly was a retired 77-year-old widow who had little social life after her husband died. She began to call her children crying how scared she was and how much she missed her husband. At first, her family supported and comforted her whenever she called. When she was really hysterical, they dropped what they were doing and visited her. Eventually, being busy with their work and their own families, they began to resent her acting like a child and dreaded the calls and the guilt trips but Lilly could not see her role in driving her family away.

When the family came to see me in therapy, I explained that a role reversal had occurred and that their mother was now dependent upon them. I then worked with her family to increase Lilly’s independence. When she called crying that she missed her husband, I advised her family to tell her that it is hard to talk to her while she is crying, and for her to please call back when she calms down. We did not want her to feel rejected; we wanted to replace her crying with a more acceptable way of getting attention. In fact, they were told to visit her even more, but especially when she did not hysterically demand that they come. The crying calls stopped within two weeks and she began to become more independent. The family had inadvertently made the hysterical crying an effective coping act and we worked on reinforcing more appropriate interactions. The key was encouraging Lilly’s strengths and not making her child-like behaviors functional.

Thankfully, there are times when we can do more than develop scars on our wrists.