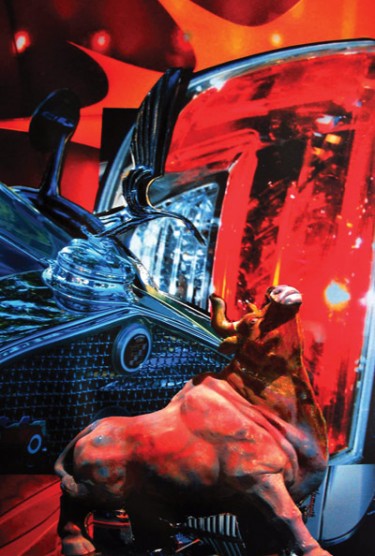 Art by Joe Strand is like endless summer: Eye-blinding colors, shiny chrome, bikinis and plenty of chaos to go around. And if debating politics or the state of American culture helps to while away the hours, even better. There’s meaning tucked within some of the Day-Glo.

One driving force behind Mr. Strand’s pop art is an admiration for high-powered engines and large machinery. Another is his love of sculpture and public lighting projects where his artistic energy was channeled when his career was young.

Now, decades later, Mr. Strand discovered collage, digital art and photography. And vibrant colors. Lots of them. He found that channeling color into pop compositions that seem to burst from their edges is the two-dimensional equivalent of illuminating skyscrapers, bridges and New York City icons like he did in the 1970s.

“I can’t make sculpture anymore,” he said standing among his art during a solo show in Southampton in April. “I don’t have the space. I used to have a large loft in the City and used to do big projects like lighting up parks and bridges. Now, I do this.” 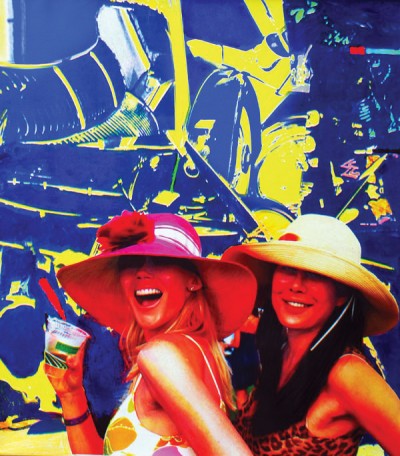 The more Mr. Strand has to say, the busier the artwork. The series, Ashes to Ashes, Rust to Rust, features a pyramid of discarded cars in a non-descript junkyard. Drawing the eye are pristine antique or exotic cars in prominent places or peeking from the pile of clashing metal and parked school buses. The series is Mr. Strand’s commentary on a throwaway society, the aging process and the decisions of what is valued and what is junk.

For his solo show at the North Main Street Gallery in Southampton, Mr. Strand arranged three separate paintings from the Our Legacy series to create a 15-foot triptych. Each composition is a whirl of contemporary images that comment on excess, greed, financial abuses, depravity and attraction towards shiny bobbles. 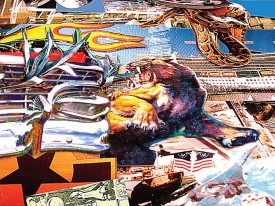 Beneath the bedlam is the wondering about what current American culture will work in the future. Tucked among images of contemporary life are snatches of blue sky, peaceful waters and open fields he spies in the Hamptons, in Florida and other places he frequents. Mr. Strand lives, works and sails in Sag Harbor.

Compositions that feature planes, trains, boats or automobiles are of a different ilk. Most center on a single item. There are series featuring a single plane propeller and classic car parts (grills, fan tails, lights, etc.). Steam trains, sports cars and boats also get their due. These series highlight the beauty that mechanics can create and pay homage to transportations that function but have pizzazz and style.

By using collage, digital technology and photography, Mr. Strand has found a way around occupying expansive physical spaces to make his art. Instead, color and pop combine to create visual excess, natural beauty and make a point that thinking needs to be done about the current state of affairs. At the heart of his art lies a love for dramatic spaces, movement, visual patterns and abstraction all rolled into a single surface. 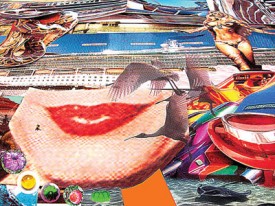 “I’m not sure everyone gets what I’m trying to do,” Mr. Strand said. “That’s okay—I hope some of what I mean gets through. My art is over the top. I like it that way.”

Mr. Strand’s art is in permanent collections held by the Museum of the City of New York, the South Street Seaport Museum, the Baltimore Museum and the International Center of Photography. His work has been exhibited in Manhattan, the Hamptons, Baltimore, Maryland, Washington, D.C., Paris, Tokyo and other places. He was a founder of the groups the Independent Artists in New York City and City Lights Work Projects based in Manhattan.

Mr. Strand’s art can be viewed at joestrandart.com. He is represented by The Hampton Road Gallery in Southampton.