While multi-instrumentalist/writer/performer/producer Chris P. Cauley stands firmly in the present, he’s surrounded by the past and reaching for the future. His broad catalog of soaring rock songs and soundscapes is brought to life through a vast collection of vintage guitars, amps and effects, which he marries to cutting edge digital recording and distribution technology.

“It’s the collision of all the toys I’ve been collecting since I was a teenager learning bass riffs in my attic bedroom,” said Cauley, taking a break between recording sessions at his own East Patchogue studio.

But these are merely the tools. It’s his passionate approach that puts Cauley over the top. “A true artistic journey is a spiritual one. For me, this culminates in an overall awareness of beauty that in turn brings about an understanding of how creative elements work together.”
Cauley now arrives at the defining moment in his fifteen year career as a Long Island independent force with a new collection of songs and a new band that will allow him to convey his message of “spiritual over material” in a fresh, inspiring way.

“My greatest strength is that I’m comfortable with my limitations,” he confesses with a grin. “I continue to study different approaches and techniques in my playing, songwriting and producing. I find these ideas creeping into my work. But as they say, often it’s just three chords and the truth. And I can live with that, too.” 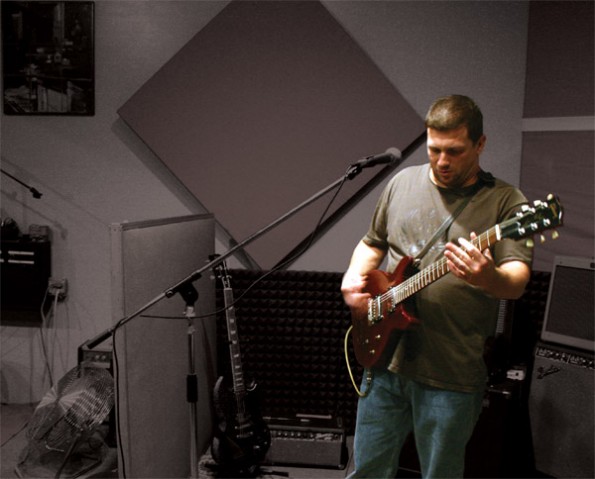 Cauley’s music can haunt with a whisper or shake the roof with thunder and fury. “Sonic Youth is the stem-cell of my musical development” he confided. “Thurston Moore once said he never practiced guitar, he just played it. And I can really relate to that. I realize now that just by listening to SY as a teenager, their approach to composition, experimental tunings and so forth just leaked into my consciousness and informed on my style—permanently. I can’t shake it, nor do I want to!”

In early rehearsals, Cauley’s new four-piece is materializing in that New York art rock model, delivering sheets of white noise, climbing chords and sonic bliss. “[The new band] is working well. I am calling it The Chris P. Cauley Collective. The guys have the whole package: Chops, maturity and enthusiasm. The chemistry was immediate, so I have great expectations.”

Cauley’s power rock, his shitkicking punk blues, his soaring psychedelia and his pretty finger picking all do that dance between influence and independence. All of this and more culminated in the release of his new collection of free downloadable songs, The Stirrings, via his website in cooperation with Patchogue-based Evergreen Recordings.

“It’s no news that the standard method of music making, distribution and listening is dead. The digital age has obliterated the old model and I embrace that. My desire is to make music for music’s sake. To build it…and let them come.”