Want to play world-class golf? Go east. Some of the best holes anywhere can be found on courses snaking along the East End of Long Island, from Friar’s Head in Riverhead to the wind-swept dunes at Montauk Downs State Park.

The concentration of golf courses is remarkable. Nassau County features 47 clubs and the expanse of Suffolk holds another 77 courses. In fact, there are more golf courses than McDonald’s drive-thrus on Long Island. Chew on that.

“Eastern Long Island, there’s no place better in the world. And I mean by far,” said Mike Meehan, 41, winner of the last two Long Island Opens and the first assistant pro at Nassau Country Club.

And for those who don’t have guest privileges at one of the famous and fabulous private courses, there’s always Bethpage State Park. The Black and Red courses are widely considered among the best public links in the US. So is Montauk, a destination in its own right.

“Long Island is a destination for people who want to play great golf courses,” said Steve Smith, executive director of the Long Island Golf Association. “The diversity of courses on Long Island is noteworthy.”

All those well-manicured greens got us thinking: What are the best holes on Long Island? Call it a quest. Great courses are plentiful. Memorable holes? Even more so. We cherry-picked nine favorites from locals in the know. Here is our highly subjective, but eminently playable list:

Atlantic Golf Club No. 11
1040 Scuttle Hole Road, Water Mill
Status: Private
Pro: Rick Hartman
Signature Hole: 128-yard, par-3 11th
The Skinny: The Rees Jones course was built in 1992 and has routinely been listed among the Top 100 courses in the US. Atlantic will host the USGA Mid-Amateur Championship Sept. 25-30. Like all East End courses, the wind is a factor. Last year’s Long Island Open was decided on No. 11. In the final round, the golfer chasing Meehan saw his demise there, where anything to the left bounces off the green and into the hazard. “He was a yard off from the perfect uphill put,” Meehan said. “It landed on the left side, hopped off the green, down the slope and into the hazard. I couldn’t believe it. It’s one sick hole. Of all the holes, that’s a really cool par 3.”

Deepdale Golf Club No. 15
Horace Harding Expressway, Manhasset
Status: Private
Pro: Darrell Kestner
Signature Hole: 410-yard, par-4 15th
The Skinny: Built on the grounds of the William K. Vanderbilt II estate in 1924 and redesigned by Dick Wilson in 1954, this private course is home to one of Long Island’s top golfers in Kestner, 56, winner of 1996 PGA Club Professional Championship with a record 17-under-par. We’ll let him break it down: “It’s a very demanding golf course,” he said, noting that fairways are always cut tight and the course plays firm and fast. “You have to hit the tee ball straight and the targets are small with deep bunkers. And you have to have great touch and feel around the green with a good short game. It’s the ultimate test. A lot of our members will shoot a lower score at Shinnecock than Deepdale. Deepdale is just so much more demanding around the green. It’s a very underrated golf course.”

Friar’s Head No. 15
3000 Sound Avenue, Riverhead
Status: Private
Pro: Adam McDaid
Signature Hole: 485-yard, par-4 15th
The Skinny: Designed by Bill Coore and Ben Crenshaw in collaboration with Ken Bakst, this masterpiece in the dunes became an instant hit when it opened in 2003. Golf Week ranked it ninth among modern courses. Nos. 14 and 15 combine to form among the best back-to-back holes in the world. And No. 18 is another classic. The stairway to No. 15 reveals a challenging downward par-4 with great vistas. “It’s a straightaway hole going downhill,” Meehan said. “It looks so natural. The whole course is impressive.” Added Kestner: “Friar’s Head is one of the prettiest golf courses on Long Island, very scenic.” 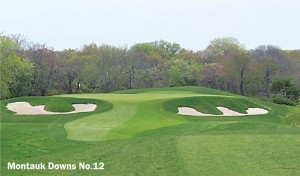 Montauk Downs Golf Course No. 12
50 South Fairview Avenue, Montauk
Status: Public
Pro: Kevin Smith
Signature Hole: 228-yard, par-3 12th
The Skinny: This course has a beguiling past and to golfers who have battled the wind, it still confounds. Master builder Carl Fisher birthed the course as part of a grand development in 1927. Robert Trent Jones Sr. redesigned it in the 1960s and the state took control in 1978. It’s a relaxed atmosphere, but be prepared for the swirling wind blowing in from the Sound and the Atlantic. No. 12 features a well-bunkered green. “You’re not going to find your ball if you miss-hit to the left into bramble. And to the right are a couple of lateral water hazards,” said longtime pro Kevin Smith, who has never seen a hole-in-one at No. 12. “It’s a green you either knock it on and have a shot at par or miss it and take bogey and possibly more.”

National Golf Links of America No. 17
16 Sebonac Road, Southampton
Status: Private
Pro: Jim Morris
Signature Hole: 360-yard, par-4 17th
The Skinny: Scottish links-style course, which opened in 1908, was laid out by Charles B. MacDonald and later redesigned by Perry Maxwell and again by Robert Trent Jones. The old windmill is an ever-present landmark. So are the bunkers. Everyone agrees the visuals are stunning. “The 16th hole they call the punch bowl,” said Steve Smith, a 20-year member. “The green is in a crater. You can’t see much else. When you walk up the side to the 17th tee, you are looking at a downhill par-4 hole with a 180-degree panorama of Peconic Bay. This hole is worth the price of admission.” Another classic is No. 4. The National will host the USGA Walker Cup in 2013. 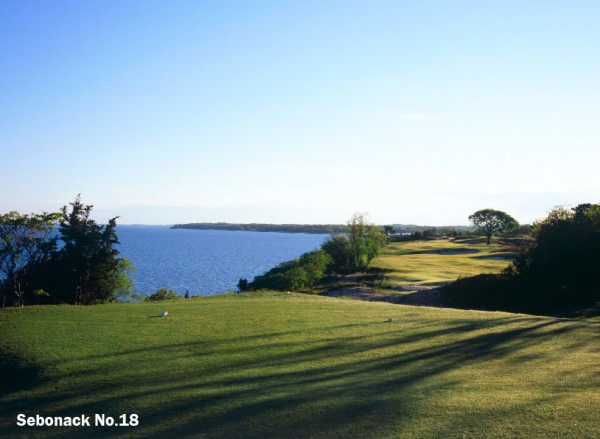 Sebonack Golf Club No. 18
405 Sebonac Road, Southampton
Status: Private
Pro: Jason McCarty
Signature Hole: 560-yard, par-5 18th
The Skinny: Sebonack, designed by Jack Nicklaus and Tom Doak and opened in 2006, is a stunning course with several great holes along Peconic Bay. Golf Week ranked it sixth among modern courses. No. 2 gets a lot of raves. But the closing hole is special. “The hole is all about the wind,” Meehan said. “If there’s none, then the hole is not difficult. But a breeze changes the entire matter. It’s not a hard hole if there’s no wind. But when it gets into the wind, man what a different golf hole this is.” Sebonack will host the 2013 USGA Women’s Open Championship.

Shinnecock Hills Golf Club No. 11
200 Tuckahoe Road, Southampton
Status: Private
Pro: Donald McDougall
Signature Hole: 158-yard, par-3 11th
The Skinny: The history is undeniable. Shinnecock is the oldest golf club in the US, established in 1891 by a group which included William K. Vanderbilt. Four US Opens have been contested among the dunes, the last in 2004. Golf Digest ranks the course third in the nation. The uphill No. 11 hole is admired for the challenge it presents, called the “shortest par-5 in the world.” The green offers a small target buffered by bunkers. “Their par 3 really is a unique hole,” Steve Smith said. “It’s one of the memorable holes on Long Island.” 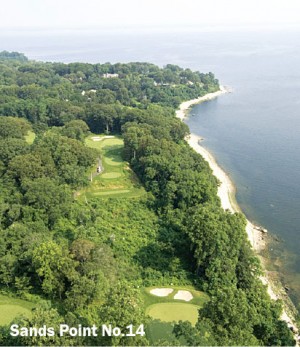 Status: Private
Pro: Steve Suarez
Signature Hole: 170-yard, par-3 14th
The Skinny: The club, built by IBM in the 1950s, sits on 210 acres, which once belonged to the Guggenheim family. Purchased by the Village of Sands Point in 1994, the course underwent renovation in 2001. The signature hole runs along Hempstead Harbor and features a tee shot over a ravine. Suarez said you have to hit the hole because hazards surround the green. “It’s very underrated,” Kestner said of this gem. “No one really knows about that one. That will surprise a lot of people.”

Bethpage State Park, Black Golf Course No. 4
99 Quaker Meeting House Road, Farmingdale
Status: Public
Pro: Joe Rehor
Signature Hole: 522-yard, par-5 4th
The Skinny: No Long Island course is as well known or widely played, with a history dating to 1923. Bethpage Black is the signature course, ranked 26th in the US by Golf Digest, and host to the US Open in 2002 and ‘09. 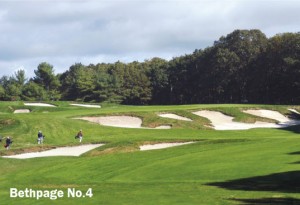 Designed by A.W. Tillinghast, Tiger Woods was the lone golfer to finish under par at the ‘02 US Open. That’s one tough course. While the entire hilly, back nine is exceptional, the par-5 No. 4 is legendary. Its strategic crossing bunker and sheer yardage are epic. “Demanding tee shot. Demanding second shot,” Kestner said. “And one of the best par 5s in the world. It’s a classic. It’s really, really good.”