Trattoria Diane has, over the years, offered straightforward, affordable food. It still does. Yet, now as a result of numerous trips to Italy by its husband-wife ownership team of John Durkin and Diane Margaritas, its menu has taken a gracious nod toward Roman classics. 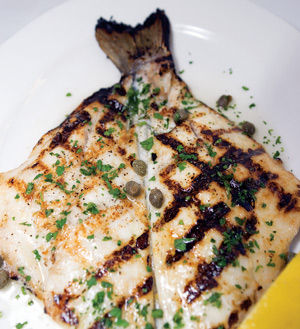 That means an opening course of five innovative vegetable dishes, deep fried artichokes with a spritz of lemon and a batch of Italian dishes like saltimbocca, spaghetti carbonara, and bucatini Amatriciana that are widely available elsewhere but given lighter, innovative spins here.

But Diane’s regulars need not fear the loss of many, perhaps most of the dishes, that made the restaurant the memorable place it is. In other words, the Tuscan pot roast and its traditional running mates are still available. So too is the civilized milieu with its white-yellow walls, carpeting, original art, Roman frescoes, candles, brick tile flooring and white tablecloths. It is, in short, still a classy, sedate, yet unpretentious spot where civilized conversation is possible. Unfortunately, that is unusual on Long Island where ear-shattering noise is often and erroneously equated with having fun.

This efficient, professionally-managed restaurant offers diners mixed olives, crisp Parmesan strips, crusty peasant bread, focaccia squares and an olive oil dip upon being seated (butter is also available).
The “Cucina Romana” that follows this opening salvo is not upscale, elaborate or refined, nor should it be. Although young, talented, Roman chefs are now giving interesting spins to conventional dishes, making them a marriage of tradition and innovation, the Eternal City’s preparations are simple fare that the poorest among its inhabitants could afford. Typical is the vegetable (“verdure”) course, five refreshing small plate choices at $6 a throw, or 4 for $22. There is not a single clunker among them. 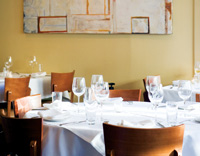 Especially noteworthy were the substantial roasted beets dotted with their ricotta salata offset and the heady tangle of treviso radicchio, almonds and balsamic. Among the fried possibilities the fritto misto, shrimp, scallops and mushrooms in lemon sauce was a standout and enjoyable to eat with fingers like popcorn rather than with a fork. The heralded fried artichokes are an interesting novelty number but failed to yield noteworthy flavor. But the delicately light fried zucchini blossoms stuffed with goat cheese on a vibrant tomato sauce did. Pastas went two for three. Both the bucatini Amatriciana, alive with pancetta, onions and tomato sauce and the feathery gnocchi enhanced by its robust tomato sauce and sausage slices were first-rate, but someone forgot to grind the fresh pepper into the spaghetti carbonara making it a rather tasteless take on this classic. A husky, tender, pan-seared pork chop was perfectly cooked and succulent without being indulgently fatty and made more interesting by its accompaniments of broccoli rabe and sweet potato purée.

The four-year-old La Volpe (the Fox) might well be Long Island’s most unexpected restaurant. What this palatial-like Italian family-owned spot is doing in remote blue-collar Center Moriches is at the least a surprise. 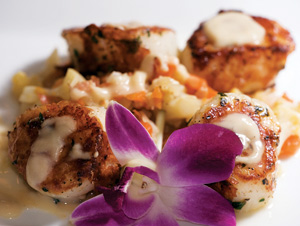 It’s much like an Italian Castle in a culinary desert, yet its roots and history are familiar ones on Long Island.

The Volpe family started out with a pizzeria in the nearby King Kullen shopping center. Instead of opening a dining room behind the pizza parlor as is commonly done, they went for broke with a formidable, splashy, standalone spot. La Volpe is a place of high beamed ceilings, soaring pillars, wrought iron chandeliers, hanging copper utensils, candles, plants, barrels, hand-painted bottles on every table holding red carnations, brick walls, book shelves, personalized wine glasses and jumbo sized portraits of notable Italians (Sophia Loren, Pavarotti, Toto, Marcello Mastroianni, etc.) It is an unapologetically Italian restaurant, not Italian-American but Italian-Italian. It’s also a place of pride and family as distant from a franchise, chain or corporate enterprise as possible. There are family photos on the menus, those wine glasses are carefully placed with the restaurant’s name facing diners and the Volpes haven’t forgotten their roots—The Anton brick oven pizzeria is attached to the elaborate restaurant.

La Volpe’s comprehensive menu offers most of the Italian golden oldies that Islanders know and enjoy. But in addition to spaghetti, gnocchi, ravioli, saltimbocca, scaloppini and Francese dishes there are choices like prosciutto di Parma, lump crab meat and sliced avocado over Romaine lettuce with a red wine and fresh pear reduction and bucatini with sardines, fennel, raisins, pignoli nuts, peas, garlic and toasted bread crumbs in a light tomato sauce. 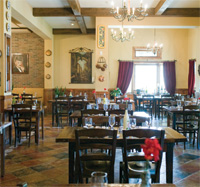 A couple of housemade crab cakes on a bed of wilted, sautéed spinach with spicy mayo also made the grade while a bowl of respectable pasta e fagioli needed salt and zing.

We sampled only one of the many pastas (priced from $14 to $24), the cannelloni Della Mamma, and it was perfection with its generous beef and pork Bolognese filling draped with opulent béchamel and crowned by melted mozzarella.

Main courses come with large bowls of pasta that are anything but afterthoughts. We preferred the robust penne in tomato sauce to the under-seasoned and slightly dryish linguini. Three superior entrées sampled were the lightly breaded, pan roasted, Dijon mustard marinated rack of lamb (at $29, the most expensive pick), the tender pork tenderloins in a rich, dreamy brandy cream sauce thick with sautéed shitake mushrooms and the vitello a la pizzaiola or soft white veal scaloppini that meshes well with its layered garlic, capers, tomato sauce and melted fresh mozzarella.

The sweets at meal’s end included standard cannoli and housemade ricotta cheesecake, a fluffy-light slab of tiramisu and knock-your-socks-off chocolate molten cake with a scoop of vanilla ice cream.