Last Thursday evening saw breweries, beverage centers, restaurants, wineries, wine shops, musicians, volunteers, paid attendees, and many, many more come together under the chandelier of the Bellport Country Club’s dining hall to lend a hand and provide their support for a good cause.

No, the good cause wasn’t to load me with food and drink until I could consume no more…at least not entirely.

The good cause refers to the sole reason why Bellport Dave’s beer, wine and food tasting took place – to raise money for charity. Several charities, to be exact (Lighthouse Mission, Camp Pa-Qua-Tuck, and scholarships for Bellport High School), and all of them received ALL of the proceeds that were raised during the event.

It’s all about helping others, man.

Regarding the actual event itself, I had a fun time visiting every Long Island brewery’s table (which was the first time every brewery shared the same space, by the way), saying hello to some I hadn’t encountered since the Blue Point Cask Festival, saying hello to those I had never met before, and of course, trying all of the beer!

…now, on to some random thingies.

– Favorite brew of the evening goes to Blind Bat Brewery’s Vlad the Inhaler, owner Paul Dlugokencky’s take on an old Polish brewing style that uses 100% wheat (no malted barley), smoked over oak for two hours prior to mashing. Paul said that the Vlad was “still a work in progress,” and often asked samplers if it “needed more smoke” as they tried the brew (I thought a bit more wouldn’t hurt, honestly), but trust me, it still held up. The smoke hits way more in the taste than in the nose, and I can only compare that taste to sucking on a savory piece of bacon. Can’t wait to taste the finished product. 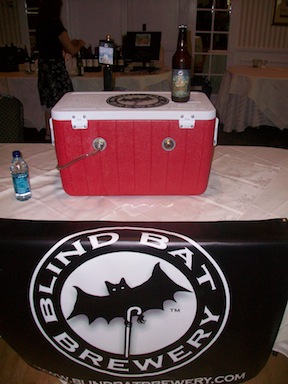 – The event marked the official debut for Long Island’s newest brewery, Barrier Brewing Company (http://www.barrierbrewing.com). Formed in 2009 by Evan Klein, the Oceanside-based brewery showcased four different beers – Ruthless Rye IPA, Lights Out Stout, Beech Street Wheat, Barrier Belgian1 – all of which were on point (I particularly enjoyed the Lights Out). You can read more about Barrier and their plans down below, under the blog entry “Barrier Brewing Company Debut.” 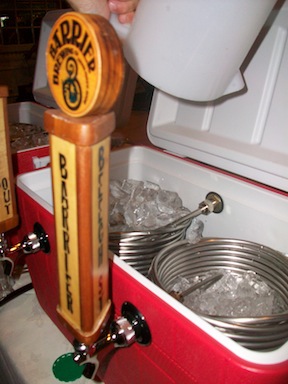 – YUM YUM @ Brooklyn Brewery’s Sorachi Ace, the newest in their Brewmaster’s Reserve series. The Sorachi is a saison featuring a rare hop varietal of the same name that was developed in Japan during the late 80’s. Had a smooth, fluffy taste (lemon, grassy), with a GREAT head throughout. Picked up three bottles for myself at Dave’s store, to be consumed at a later date. Yep, it was that good.

– Large presence from our local homebrew scene, including two groups I had never run across before: Rocky Point Artisan Brewers (http://www.rockypointartisanbeer.com), comprised of Donovan Hall, Mike Voigt, and Yuri Janssen, and JDBrewery (http://www.jdbrewery.com), a two person clique from Bellport, I believe, that served up a Special Hops IPA.

The next big brew shindig is the North Fork Beer, BBQ & Wine Festival on Saturday, 8/14, to be held outdoors at the Martha Clara Vineyards (Jamesport). Talk about an ideal setting. This will be my first North Fork event, and just thinking about all of the beer (100 beers, 50 breweries) I will be consuming against the backdrop of an Eastern Long Island sunset has me in super duper anticipatory mode. But I must relax, as it is still some time away. But seriously, the hell with relaxing. It’s going to be a great time.

Anyway, congratulations to Dave, and to EVERYONE who participated that evening, in some way, shape or form. Again, it’s all about helping others.