It was a 23-foot wooden sloop located along the Florida Panhandle. Just one problem. How would Almberg, a father of four who lives in Huntington, get his prize back to Long Island? Shipping it would prove prohibitively expensive. So Almberg decided he would sail it home.

His 2,000 nautical mile odyssey began when he took possession of the “Blue Moon” in January. The rest is tirelessly chronicled on his blog: http://www.unlikelyboatbuilder.com/ He’s also on Twitter: https://twitter.com/UnlikelyVoyager

Almberg, 57, grew up sailing with his father and uncle. But he abandoned ship life in pursuit of rowing for a decade. Crew – those pencil-thin missiles cutting through the water under oar power – became his passion.

Then he decided to slow down and cruise once more. Almberg and wife, Helena, began looking at sailboats. When a wooden sloop caught their eye in Mount Sinai Harbor, it gave him the blueprint for the perfect yacht.

In the meantime, he decided to build an 8-foot skiff in his garage, one plank at a time. Nicknamed “Cabin Boy,” the small boat came together rib by rib and gave rise to his blog.

“I really didn’t know anything about wooden boats,” Almberg said by phone. “I just knew what fiberglass boat people tell each other, ‘[A wooden boat] is too much work.’ I decided to build a small wooden boat to prove that I could take care of a larger wooden boat. I don’t know what the logic behind that was, but I came to that conclusion.”

After an exhaustive search, he finally found his yacht – for the right price – on eBay. His plan was coming together nicely.

“We were looking, but weren’t really planning on buying then,” Almberg said. “It’s not that easy to find a good wooden boat.”

The Tom Gilmer-designed Blue Moon yawl, anchored in the Steinhatchee River, needed superficial but extensive work. Its barnacled bottom was stripped, wormy wood replaced, imperfections sanded and sealed and finally the keel painted a two-tone blue. Almberg oversaw the restoration in Florida himself.

The Blue Moon, with Cabin Boy in tow, set sail for New York in April. And so Almberg’s blog, which he originally started as a way to document his scratch build of a dinghy, turned into a true nautical adventure tale.

“I was surprised when people started reading it,” said Almberg, who works in technology and web development and is currently home planning the next leg of his trip. “I guess that happens a lot with blogs. You don’t realize how many people follow it. A lot of people fantasize about going to sea and being independent for a while.”

The depth and detail of the blog draws readers in. His 500-mile shakedown cruise down the Gulf coast through the heart of Florida at Lake Okeechobee and out at Indiantown on the east coast makes for mesmerizing reading and the photos are magical.

The next leg took him up the Intracoastal Waterway past St. Augustine to Jacksonville, where the Blue Moon and Cabin Boy are currently docked awaiting their captain’s return.

Almberg, whose wife is Brazilian, is understandably a soccer fan. He’ll resume his journey some time after the World Cup. The next stop on his voyage to Long Island? Myrtle Beach, S.C.

“I’ve always wanted to take a long sail like this and just never had the chance,” Almberg said. “I have an amazing wife who said, ‘Why don’t you sail it home? Get it out of your system and go have some fun.’”

Fun indeed. Almberg hopes to reach Long Island by November, and his blog brings us all along for the ride. 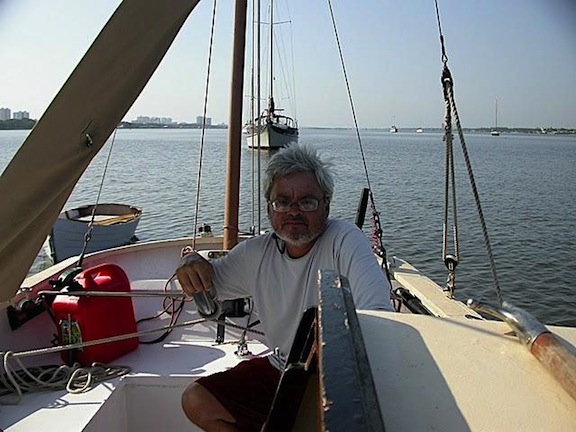