Westhampton Beach Performing Arts Center (WHBPAC) may have opened only 12 years ago, but the theater itself isn’t a new space. In fact WHBPAC was built in 1932 as a grand movie palace, and operated as such until 1995 when its owners decided a large single theater facility wasn’t financially viable anymore. The building was set to be demolished when several Westhampton residents stepped in and proposed the theater might make a feasible small community arts center instead.

What Westhampton Beach got as a result of this community effort was a beautifully restored 425-seat theater thanks to generous donations of money as well as services of local architects, builders and designers. 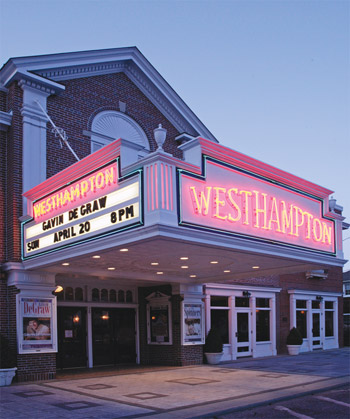 Everything that could be salvaged was, according to Executive Director Clare Bisceglia, and whatever needed to be replaced was meticulously replicated to fit in with the center’s vintage interior. Bisceglia relates the center’s builders even “wore down the marble in front of a new ticket booth in the same way it was worn in front of the old one.”

Clearly no detail was overlooked in the theater’s beautiful restoration, but it is actually the center’s state of the art Vertec linear sound system that has attracted the attention of world renowned musicians such as Patti Smith, The Neville Brothers, The B52s, k.d. lang and Lyle Lovett. This system ensures that every seat in the house hears exactly the same thing.

WHBPAC’s Executive Director explains that when she started working at WHBPAC about eight years ago, she had to use her contacts (gained through years of working in the entertainment industry) to lure artists out to the center’s small and seemingly out of the way stage, but now the theater’s reputation among musicians makes it easier to book the big names. She recounts, “Emmylou Harris actually stopped in the middle of her concert and said to the audience, ‘I hope you appreciate what a rare jewel you have here’” in reference to the center’s perfect acoustics.

Although Bisceglia is thrilled to feature famous entertainers at the center, she is equally motivated to showcase newer talent such as Rufus Wainwright and Melody Gardot.

“I love the icons of course, but I also like to bring in young artists and introduce them to the audience.” she clarifies.

WHBPAC’s public relations and artist coordinator, Jodi Giambrone smiles as she walks up to the center’s balcony, explaining, “Our last row in the balcony would still be considered center orchestra at Carnegie Hall.” She adds, looking down at the classic proscenium stage, “ I love it up here. It’s the party area. This is where all the dancing happens, but even from back here you can still see the artists’ face and eyes as they perform.”

For those looking for an intimate concert going experience out in the Hamptons, WHBPAC’s 2010 summer season will feature performances by Cyndi Lauper, Los Lonely Boys, and George Thorogood among many others. For the full schedule go to whbpac.org or call (631) 288-1500.