The recent passing of a one-sided immigration bill into law in the state of Arizona has brought a buzz of American cultural attention to Public Enemy. This law is riveted in the bad taste and practice of racial profiling of Latino people in a region, and there still hasn’t been a clear answer as to how that land transferred from indigenous people into the United States of America.

Many people have reached out to me reminding me of 1992 when the song and video “By The Time I Get To Arizona” stood tall as a pop protest against a state refusing to acknowledge the January holiday for Dr. Martin Luther King Jr. Rap music and hip-hop during that time had a virility across the television and radio waves—none seen since rock and roll—I felt that riding this pop-paved audio visual highway to the cultural planet with something politically and socially relevant was a way to enjoy the synergy of beats, rhymes and life. People might quickly point to Bob Dylan, John Lennon or Allen Ginsberg as sources for the borrowed technique. 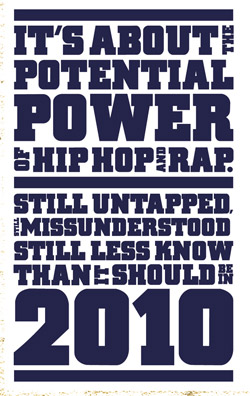 Fast forward to present day. The great hip-hop scientist-musicologist DJ Spooky immediately remixed an a cappella version of “Arizona” within some new arrangement and beats he created. I played it on my radio show. Other remixes continue to storm the southwestern state and the underground airwaves in protest. While I was humbled, I also know in confidence that this ain’t about me. And it’s way beyond Public Enemy. It’s about the potential power of hip-hop and rap. Still untapped, still misunderstood, still less known than it should be in 2010.

In the world of millions of Myspace pages full of original artists’ songs, Facebook and Twitter technologies, a common issue for artists is how to get heard beyond the mass to the masses. Rap music and hip-hop have been conveniently square-packaged into adolescent dance music driven from a corporate commercial stereotype aesthetic. This style has been what’s been exposed to the mass marketplace the past 10 to 15 years; especially mimicked in the New York metropolitan area and steered away from the controversial area where everything misunderstood about the culture shared a synonymous description with a Parental Advisory sticker and then VP-spouse Tipper Gore’s blanketed evaluation of what was toxic to “our kids.”

Thus the power of rap music and hip-hop has been led astray from an essential area—imagine if Bob Dylan gave up going electric. Regarding the Arizona situation, I was also approached by a hip-hop collective from the Phoenix-Tucson area that delivered an eight minute remake of “By The Time I Get To Arizona” complete with a video. 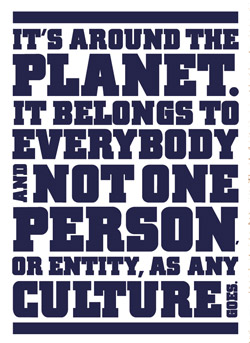 These artists have conceded to the fact they may never be heard, even on their local radio station, never mind MTV or Viacom-owned BET, but can nevertheless make a pertinent statement with rap music. It is a powerful display; skilled, flowing and on-point in worded precision.

What does this mean to the New York metropolitan hip-hop/rap birthplace, which has been drowned out by urban corporate radios’ redefinition of the artform and culture?

It means it’s very important that the cultures past, present and future should be equally respected, put in proper perspective and regarded within the context of reality.

Acknowledge that hip-hop was spawned in the Bronx and its four key elements of turntablism, graffiti, breakdancing and rap were defined in a modern day context. It was important in the late 70s and early 80s for the surrounding hip-hop nation in the suburbs of New Jersey, Upstate, Connecticut and Long Island to understand the history of black people as well as everybody else.

All of these and more were bred on Strong Island, where we had the interconnected pulse both from the transmitted mainstream and from the fact that the black and brown migration on Long Island had roots in four of the five NYC boroughs (sans Staten Island, aka “Shaolin,” where Wu Tang connected Brooklyn and NJ to make Manhattan bow down). But, the definition of hip-hop and rap may be hazy in the 2010 millennium given HOT 97 and Power 105’s takeover of the artform.

The fact remains real. The definition of “rap” is a vocal application of a process, which can be layered across many of the music styles we already know—rock, reggae, soul, folk, blues, jazz, yes even country like my man Cowboy Troy does. This style derives from the Jamaican style of a DJ toasting on the mic over dub instrumentals.

This technique is still the same regardless of voice accent, whether vinyl or the now universally accepted Serato MP3 DJ software. Hip-hop is the umbrella that encompasses all of this—the four elements as proclaimed by the holy trinity Godfathers of hip-hop: Kool DJ Herc, Afrika Bambaataa and the Grandmaster Flash who I first witnessed in action at the old Roosevelt Roller Rink in 1978.

All this is to say that the accomplishments of the past 37 years of hip-hop should be acknowledged with accuracy and supported as a legitimate artform by the same communities who are repeatedly approached to support it as industry product. As for the truth in this, the great philosopher in rhyme, Wyandanch’s own Rakim said, “It’s not where you from, it’s where you at.” The phrase that gave a pass card to the suburbs in the Eric B and Rakim 1987 rap classic “I Know You Got Soul.”

The “R” as Rakim is royally called, also calls to recognize who oneself is and respect one’s surroundings. Meaning that to be hip-hop in, let’s say, Hicksville, didn’t mean you put graffiti on a storefront though a bodega or train would’ve qualified as your canvas in a cut-backed-school austerity laden Bronx in 1977.

Hip-hop is a universal cultural worldwide religion of sorts in 2010. It’s around the planet. It belongs to everybody and not one person or entity, as any culture goes. But respect the architects of where it comes from; know yourself and hip-hop and rap will do. At its best, it’s a common human language that eventually knocks down barriers and begins uniting the similarities.

In this fast moving millennium, the first decade is finished. The past, present and future of rap and hip-hop needs to always be issued in balanced perspective to grow involved fans, not solely mass consumers of an industry. But to keep them, and integrate them, interactive participants as well. As genres go, rock and jazz do this well, and sports do it better than anything. It constantly defines and reminds with truth, stat and fact.
All of this is to say that the world of hip-hop is deeper than what you see and hear at its top. I’m embedded deep in that world, even finding time to nationally and internationally do Public Enemy’s 70th and 71st World Tour with a 20th anniversary celebration of Fear of A Black Planet. Much of what I do is based on the quality and meaning of the art. Much is volunteer work to widen the road for others. A reason to the rhyme to enjoy something done by many from something started by a very few.