While it’s a simple fact that the apple doesn’t fall far from the tree, what gives each Golden Delicious or McIntosh its unique flavor is far more complicated and nuanced than nature’s primitive urge to release the seed and make more of itself. One must consider such variables as weather conditions (amount of rainfall is key here), mischievous worms and even the incline of the hill on which the apple is dropped, how far it rolls (from point of impact), etc. when determining the origin of its taste. Such is the business of identity building.

The fact that you’ll hear Harper Simon’s incredibly unmistakable father in his work is really only part of the reason why songs from his eponymous first album sound so familiar and, like the pie after the picking, simply delectable. A good deal of the credit can be attributed to legendary producer Bob Johnston (Johnny Cash, Bob Dylan, Leonard Cohen), who brought in a veritable all-star band made up of Nashville session guys from the 60s including Charlie McCoy (Blonde on Blonde, Nashville Skyline), Lloyd Green, Gene Chrisman and Mike Leech who played on Elvis Presley’s “Suspicious Minds.” 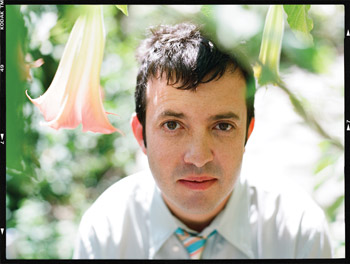 Four of the songs on the final record trace their roots back to these initial recordings. And they sound great. There’s something pure here, something vintage, earned and real. Harper recalls this period of time in the album’s development as “completely fascinating and totally satisfying.” Apt modifiers, in my opinion, for the entire process and product.

But this is not just another Americana roots record filled with notable players and a generically classic sound. Although Harper is clearly tipping his cap to the retro psychedelic music that (I’m sure) made up a significant part of the soundtrack of his youth, there’s a very modern sensibility that pervades the overall packaging/big picture of Harper Simon. There’s a sweet mingling of old and new, sort of like iced tea and lemonade. Not so much the country and the city, but more like the country in the city. “I wanted to mix up the musicians from Bob Johnston’s stable with the talents from my generation,” said Harper in a recent phone interview. He was post-gig in Berlin; I was parked off the service road heading west on the LIE. The slight distortions of sound caused by car-through-breeze interruptions and the juxtaposition of our respective lots in that moment suggested other kinds of interesting pairings.

I think what makes this country-folk album hip (in the right kind of way—not hipster, mind you) and relevant are the aforementioned and essential “mixes” (generational, social, aesthetic, etc.). What Johnston started, Harper and Tom Rothrock, who has worked with Beck and Elliott Smith, finished. Harper’s publicist terms it in his biography as the “shock of the new,” a vivid and appropriate description for sure, but I’d like to call it more of a complementary surge of electricity if I may. Check out the understated contributions of Mark Ribot, as progressive and contemporary of a player as you get, and his ambient guitar work on “Shooting Star,” one of the album’s standout tracks, and futuristic country on “Cactus Flower Rag.”

And then there are friends like singer/violinist Petra Haden (The Decembrists, Foo Fighters, Yuka Honda), Sean Lennon, and The Bird and the Bee’s Inara George who sings lovely backups on “The Shine,” a melancholic beauty that appears towards the end of the album. Each of these artists (and there are truly too many to name) contributes musically and—if you can go with me here—energetically to the album’s vibe and overall sound. These friends are Harper’s youngish contemporaries, and they stand side to side (figuratively, that is—they recorded mostly in separate cities and sessions and were never in the same room) with the greats of old-time rock and roll. They play together honestly and with humility. They feel like they belong together. There are no egos in this music. Just one big happy family at some sort of deeply personal celebration at the center of which stands Harper himself—inspired, pensive, and thankful.

Indeed, the push to create this special kind of debut seems indicative of an archetypal artistic quest. I mean, hasn’t the goal of every band always been to carve out its own unique and unmistakable sound? And isn’t it funny how the more we try, the less we succeed? Sometimes, it’s the letting in of the different parts of our selves that makes us unique, not the shutting out. And nowhere is this candid truth more apparent than in the lyrics of Harper Simon.

“Each song has its own story,” Harper says. In “Shooting Star,” it’s the story of the metaphoric drifter looking to find a home. “Someday you’ll find out who you are / Someday you’ll be more than just a shooting star.” It’s the story of our 20s transitioning into our 30s. It’s the settling in that matters here, the slow transformation of the invisible man into something more permanent, tangible, present. In “Wishes And Stars,” co-written by the Nigerian poet and novelist Ben Okri, we hear that “Everyone seems so certain / Everyone knows who they are.” Except the narrator of course. He asserts later that “There are more wishes than stars,” confirming our innate need to have more aspirations than we can account for. “Berkeley Girl” is an “unpretentious and vulnerable” portrait of someone whom Harper refers to as “a real person.” 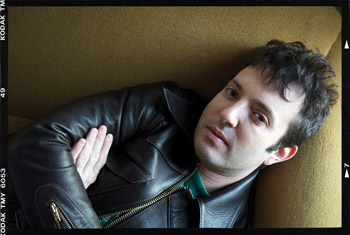 “And though she makes her home in Hollywood,” he sings, “She’s really just a Berkeley girl.” More displacement. More being here but not of here. And in “The Shine,” we hear about “a place between waking and sleeping / A space where the land meets the sea.” Though there are different stories throughout the album, they seem to cover some of the same enigmatic territory: Characters in between places and stages in their lives, in between the old and the new, the lost and the found. Perhaps this search for identity serves as the impetus for the making of Harper Simon. Perhaps it’s the need to make something for and of himself, to create a whole with seemingly disparate parts, that shaped the music we hear today.

With that being said, it might seem a bit strange that several of the record’s ten tracks are actually co-written by Harper. Three of these co-writes involve his father who, according to Harper, “took some of the prerecorded tracks and did some rewrites of the verses here and there,” something “he never did before.” And although the familial magic is apparent, it never supersedes the other collaborations that take place around it. He’s just “one of the writers,” Harper explains, and we believe him as hard as it is to believe, the veracity of such a statement confirmed mostly by the sincerity with which he goes about his business and his art. Is the process of co-writing then also part of the tapestry, part of the journey of self-discovery that defines this album? “It takes two,” says Ryan Adams, “when it used to take only one.”

At the end of my interview with Harper Simon, I indirectly asked him about this peculiar thesis of mine, how his debut needed to be made this way, needed to connect the different parts of his life if it was to be made at all. He politely responded that all he was trying to was to “make something honest.” That’s all. A mighty challenge in a world too enchanted with the bells and whistles of deception.

A worthy challenge for all of us to consider, whether we are writers or musicians or business owners or farmers or whatever. Survey what’s around you like everyone else has done, use some of the familiar tools, but build your own unique house. Build your own house…and fill it with love.

One might say that Harper Simon has made a house that any father (or son) could be proud of.