Max Seibald is one of the most recognizable names in lacrosse.

Just in the last year the 22-year-old midfielder was chosen second overall in the 2009 Major League Lacrosse draft, led Cornell to the NCAA title game and won the Tewaaraton Trophy as the college player of the year.
Yet his rise from unknown high schooler to elite prospect seemingly happened overnight at the Empire State Games, New York’s annual Olympic-style festival. Earning a roster spot on the Long Island scholastic boys’ lacrosse team is a sure ticket to stardom.

Look no further than Seibald, who tried out after a strong junior season at Hewlett High School. But he was among 500 other Long Island hopefuls vying for 20 spots in June 2004. Seibald auditioned the previous summer and was cut the first day. What were the odds a kid with only moderate Division III interest could turn heads and land a job?

“Coming back the next year, it was intimidating,” Seibald said. “You see college coaches on the sidelines. It motivated you but also made you grip the stick a little bit tighter. This was my first experience at this level and I wanted to make things happen.”

Seibald not only made the team, he starred. His roommate on the road that summer? Notre Dame goalie Scott Rodgers, a Wantagh native and MVP of the 2010 NCAA Tournament.

Empires put Seibald on a new trajectory. On the first day college coaches could make contact, the Hewlett teen received an early-morning phone call that woke him up. Then-Princeton coach Bill Tierney was on the other end. The offers came pouring in from there. 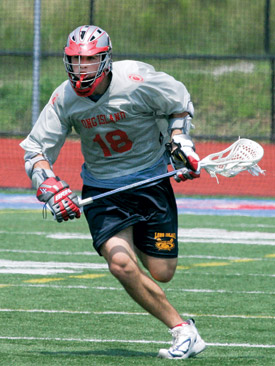 Johns Hopkins coach Dave Pietramala agreed. Before he grew into one of the great defensemen in lacrosse history and won two national titles as a coach, Pietramala was an unassuming junior at St. Mary’s High School. Then he earned a spot on the inaugural 1984 Empire State Games squad.

“I wouldn’t be sitting where I am right now if I hadn’t played in the Empires,” said Pietramala, who was recruited to Johns Hopkins as a player only after his ESG performance. “That’s the God’s honest truth. I would have never gone to Johns Hopkins.”

The Empire State Games resumes in Buffalo from July 21-25 after a one-year hiatus forced by recession fears and a state-wide budget crunch. The event draws 7,000 teenaged and adult athletes in 33 sports and has been a summer staple since Gov. Hugh Carey opened the first Games in 1978.

These Games are more cash conscious than ever before. Buffalo area businesses pledged $1.1 million in cash and in-kind support. And for the first time, ESG decided to charge athletes a $10 registration fee. 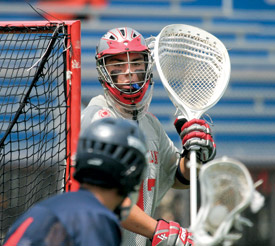 While some grumble whether the Empire State Games should even move forward at a time when the state threatened to close parks, others are glad to see the Games back. They are a rite of passage, especially in the lacrosse community.

For lacrosse players, the void was filled by the Long Island Showcase Games, an event sponsored by the Nassau and Suffolk coaches associations. As much attention as it garnered for the sport, the Showcase couldn’t replicate the Empire experience.

“I was disappointed. But I was disappointed for Long Island,” Sachem North coach Jay Mauro said. He was a former player and now he’s the Long Island coach. “This is prestigious. It’s great for the kids. We’ve medaled every year. I’m just glad they brought it back this summer.”

That’s why a record 630 players showed up at ESG boys lacrosse tryouts in 2008, and why another 558 registered to compete for a Long Island roster spot by the end of May. And the alumni? A who’s who of lacrosse greats.

Scholastic girls lacrosse, introduced to the Empire State Games in 2001, has medaled each year and won the last three golds. The girls boast the same talent, if not the tradition.

“It’s really the flagship sport,” Fox said. “It means a lot to the kids to make this team. They realize they are representing Long Island. This is the highest level, a select all-star team in an event that’s been important over the years.”

With Fox at the helm, Long Island’s scholastic boys lacrosse team has developed into an elite program with a demanding schedule that’s served to sharpen any rough edges on the assembled talent. Five days of tryouts in each county were followed by a Top 50 game. The final team was announced with fanfare at Hofstra on June 25th.

Then comes the hard part: A month of practice to go with three out-of-state tournaments. All of it serves as a warm-up to the Games themselves—five games in three grueling days in the heat of summer followed by a medal round at Canisius College in Buffalo.

“That is a high-profile sport on Long Island,” Long Island region director Bob Kenney said. “We are the team to beat. And who knows what it would be like if we had an open team?”

To the chagrin of the state’s other five regions, the victory locked up Long Island’s fourth straight gold medal and 15th overall. The scholastic boys have medaled every year since the sport’s inception in 1984, a feat on par with the Harlem Globetrotters.

As if playing for a college scholarship or Long Island pride weren’t enough, the 2010 team has a unique opportunity at history.

One way or another, this collection of talent from every corner of Long Island will turn heads. Whether they bring home gold medallion keepsakes, or a scholarship offer or an unforgettable memory, the Empire State Games experience is rich and lasting.