Eating at Bar Frites, a new French bistro in Greenvale, I thought of the politically incorrect line from South Pacific about a girl being “broad where a broad should be broad.” Similarly, to be a good French bistro, a bistro has to be good with classic bistro dishes like escargots, onion soup, foie gras, mousse, steaks, burgers, skate, bouillabaisse, French fries and the like. 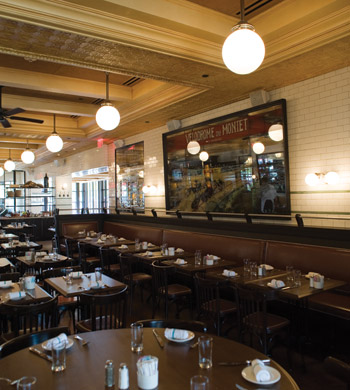 Judging from a recent visit, Bar Frites succeeds on this score.

This unpretentious, pleasurable, though very noisy, French bistro was probably the hottest restaurant on Long Island when I visited it about two and a half weeks after its opening (we were given a choice of 5pm or 10pm reservations, although more than half the tables were unoccupied until after 7pm when things heated up). No doubt the deservedly good reputation of owners Gillis and George Poll, who also own Bryant and Cooper, Toku, Majors and Cipollini, lured at least some patrons.

The most savvy ones among them will head for the traditional French comfort food like the puff pastry capped escargots swimming in snappy parsley laced garlic butter, the chicken liver and foie gras mousse that’s velvety perfection, the rustic, generously portioned, zingy steak tartare or the fresh, exemplary red and golden beet salad enhanced by its baby arugula, pecans, goat cheese and green beans in a tangerine vinaigrette. Only a standard mixed green salad priced at $8 falls below the $11 to $15 price for appetizers. 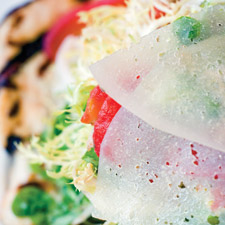 Although the plats du jour (aka: specials of the day) go for $24 to $55 (for a 2 pound lobster), two entrées, an omelet and a burger cost $15. A number of dishes similar to those at Bar Frites cost less at some other local French bistros.

Aside from a light, though flavorless French style pasta of shrimp and asparagus that needed to be livened up, I’d order most of the main courses again. The steak frites ($32) features a tender, juicy New York strip steak and a big batch of crisp, thin French fries. A thick, tall, dryish, overcooked hamburger ($15) was slightly chewy on a slightly too stiff roll, but the sautéed skate ($24), a bistro mainstay, tasted like a Parisian creation at its best.

There were no strikeouts among the desserts ($7.50 to $9) that included an unusually soft, tender apple tarte tartin; a thin, tangy, terrific lemon meringue tart; a luscious, rich chocolate mousse; and an intense, best-on-the-Island, molten chocolate cake accompanied by a cylinder of whipped cream. 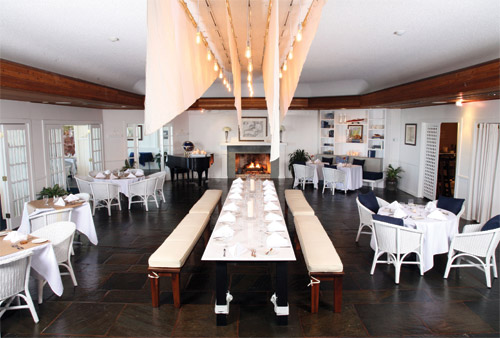 Diners who liked the Gulf Coast Kitchen in 2009 will probably enjoy it even more this time around. Last year, in an effort to revive the nearly moribund Lighthouse Grill in the glamorous waterfront Montauk Yacht Club, a new restaurant and chef created a luxurious East End scene that featured dishes and ingredients from the Gulf Coast, Cuba and Mexico. That lovely, nautical scene remains as do the delightful dining rooms with their white wicker chairs, potted plants, antique touches and massive stone fireplace.

This season, while the name is the same, the Gulf Coast Kitchen is a different place with a new chef and menu. The chef is Robbin Haas, a veteran kitchen commander with thirty years of experience at destination restaurants like Four Seasons, Turnberry Isle Resort and China Grill as well as his own two eating places. His new American menu stresses local farm- and sea-to-table ingredients. It avoids culinary pyrotechnics and fancified, frou frou food, instead emphasizing fresh, authentic New American dishes that let the taste of those ingredients shine.

Many of the finest picks are also the simplest, like hand-cut pasta that co-mingles with luscious strips of soft, slow-roasted veal and a generous sprinkling of mushrooms and carrots ($20), and silky butter poached lobster ($32) that demonstrated the benefits of letting the shellfish establish its own personality. Other mains worth mentioning were the plump, tender, lightly-seared diver scallops ($26) delivered with marinated lemons, herb oil and a pea shoot salad, and a super-sized, flavorful roast Berkshire pork loin ($26) that’s almost intimidating in his heft, accompanied by a warm slaw of cabbage and enhanced by its sweet Dijon mustard vinaigrette.

Among the starters, comfort came in the form of a deep bowl of delicate, not gloppy, New England Style clam chowder ($9). Airy float-away-light Acorn Hill goat cheese gnocchi were well worth their cost ($12) as was an earthy, bright, roasted beet and goat cheese salad ($13) whose two ingredients got along fine. Double cut maple glazed bacon ($14) yielded a nice balance of sweet and smoky, but contained only three strips of bacon.

The housemade desserts were up and down. A superior banana cream pie ($8) with good but scant dark chocolate sauce sported plenty of whipped cream and bananas, and a soft, fine, flaky crust. But a fruity flavored raspberry cobbler ($8), highly touted by our waiter, was scorching hot from being nuked in a microwave. A warm apple tarte tatin ($8) was made a tad too sweet by its ginger caramel and a smooth, velvety key lime pie ($7) yielded little citrusy flavor.

Service at the Gulf Coast Kitchen, though earnest and affable is often far from polished and professional. Bus girls constantly cleared dishes while other diners at the table were still eating, more than once there were no forks on the table when dishes arrived and a waiter who was given a valid gift certificate loudly embarrassed the diner who submitted it asking, “What’s this?” (As in, “What are you trying to pull?”)