Italian Cinema has a long and glorious history, but the Silvio Berlusconi era has not been good for the nation’s filmmakers. Berlusconi’s monopolistic control over Italy’s television and movie industries has starved creativity and innovation. Nevertheless, the past couple of years have seen the sudden emergence of a new generation of young Italian filmmakers who have brought a renewed energy and imagination to Italian filmmaking with movies like Il Divo and Gomorrah. 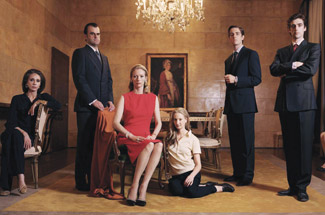 With his new film, I Am Love, director Luca Guadagnino establishes himself at the forefront of this cinematic renaissance. In a manner reminiscent of the classic masterworks of Luchino Visconti (Senso, The Leopard, The Damned), Guadagnino tells a sprawling tale of passion and turmoil in a wealthy Italian family.

The Recchi’s family-owned firm has been a leader in the Italian textile industry since before World War II, but the winds of change start blowing fast when the family’s aging patriarch suddenly announces his retirement during the dazzling dinner party that opens this mesmerizing film. Failing to learn from the lessons of King Lear, he divides leadership between his hard-nosed son, Tancredi, and his idealistic grandson, Edoardo. They immediately come into conflict over how to respond to the challenges of globalization. However, even more powerful currents of transformation are appearing amongst the family’s women. Elisabetta, Edoardo’s sister, is wrestling with her attraction to another woman. Even more dramatically, Elisabetta and Edoardo’s glamorous Russian-born mother, Emma (Tilda Swinton), whose strength and poise hold the family together, finds herself irresistibly drawn towards a brilliant chef who is also one of Edoardo’s closest friends. 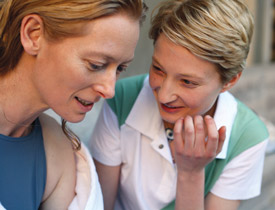 Academy Award-winner Tilda Swinton spent seven years developing I Am Love with Guadagnino, and their patient efforts have been richly rewarded. The uniformly excellent ensemble cast creates a lovingly detailed portrait of family life, but it is Swinton who lifts the film to a higher level. Working in fluent Italian, her brilliant performance takes us deep into Emma’s inner life. She is a woman whose glamorous style and seemingly perfect life conceal a growing core of loneliness. Living far from her native land, Emma has put down new roots, but they prove disturbingly shallow when love starts tugging at her heart.

Aided by the surging rhythms of acclaimed composer John Adams’ (composer of the operas Nixon in China and Doctor Atomic) evocative musical score, Guadagnino weaves the tangled lives of the Recchi family into a sensual and thought-provoking meditation on the clash between personal freedom and social responsibility. Although there is ultimately little question of what Guadagnino considers the right choice, he doesn’t soften the drastic consequences of his characters’ decisions. 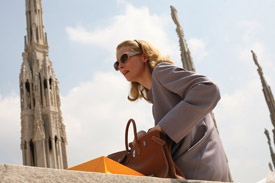 Guadagnino’s elegantly intuitive storytelling keeps us pleasantly off-balance, caressing viewers with quiet moments when melodrama might be the obvious expectation, then hitting us with a crushing emotional blow when we least expect it. One of the year’s best movies, I Am Love is a rare work that manages to be intelligent about the wildly irrational passions of the human heart, making us think and feel in equal proportions.