“We are the Chapel Hillbillies/Mixture of grays and blues,” sings Kate Taylor, about growing up in Chapel Hill, NC with four musical siblings—Alex, James, Livingston and Hugh. The song is called “Sun Did Shine (on Carolina),” and it’s the perfect accompaniment to the rare archival footage of Taylor and her brothers that can be found on her new DVD, Kate Taylor: Tunes from the Tipi and other Songs from Home.

“It was a real treat to find that footage,” admits Taylor. “I have this dual heritage where my mother was from New England and my dad was from North Carolina. So there’s this kind of pull in both directions. But I’m very happy I was raised up in North Carolina. It’s a very soulful place with all types of music—country, gospel, bluegrass, R&B and rock ‘n’ roll. And of course our parents had music in the house and they provided us with musical instruction if we wanted it, and everybody gravitated towards it.”

Along with clips of home movies, the music documentary (produced by Taylor’s daughter Liz Witham and her film partner/husband Ken Wentworth) features archival photos, concert footage and more recent acoustic field recordings of Taylor in Martha’s Vineyard. The Taylors grew up summering on the Vineyard—sailing, fishing, playing music—and many of them eventually moved to the island where they “felt the most carefree.” The setting clearly made an impression on Kate and after seeing her future husband’s tipi in the early seventies, she decided to hand-stitch her own tipi, which she lived in for six summers, cooking over an open fire.

“The rain would wash the dishes and it was in a nice grove of oak trees,” recalls Taylor. “It’s this kind of lifestyle that’s hard to do, because it’s kind of such a luxury. It was really idyllic… And it gives you good dreams. I think when you’re sleeping outdoors, there’s not much between mother earth and father sky. It connects you right up.” 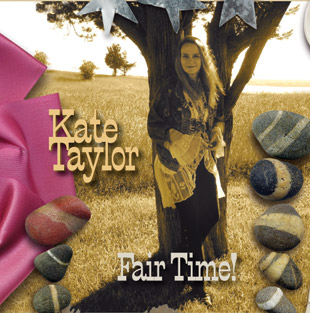 Green before her time, the folk/rock singer-songwriter was always inspired by nature and often mentions moonlight, fire, snow or sunlight in her songs. Having developed an affinity for Native American culture (Aquinnah Wampanoag are native to the Vineyard), Taylor even helped revive the ancient craft of wampum bead making in 1975 after her husband, the late Charlie Witham, noticed that the wampum on display in a museum exhibit was made from the same clam shell they had seen while walking on a beach on the Vineyard. Centuries ago, wampum was used as a means of communication by both New England and Long Island Indians, and Taylor makes reference to Charlie and these “treasures” in the song, “Things I Carry,” off her latest CD, Fair Time!

“There’s a great story behind that song,” notes Taylor. “My friend has a writing workshop series that really helps you open up and write, and right after Charlie died, she offered me the class. So I went and I found that everyone was writing prose, and I was writing in rhyme. One of the assignments was ‘Things I Carry.’ She gave us 20 minutes to write something, so I just sat down and wrote that song.”

Her latest record is an eclectic blend of original folk, rock, honky-tonk and soul, featuring the rocker “Brake Job,” ballads like “Red Tail” and “Fair Time,” and the catchy “King of the Pond” and “Tell Me a Story,” both of which come alive on the DVD when Taylor performs them around the fire in her tipi. One thing is clear, whether she’s in the spacious woods of Chapel Hill, on the Vineyard’s beautiful beaches or in a hand-stitched tipi, Taylor feels at home as long as she can make music.

Kate Taylor will be performing at Feinstein’s at the Regency in Manhattan on July 15th. For more info, visit katetaylor.com.