There are many forms of love, such as romantic love, love of children, of pets, of parents and even of possessions. To me, profound love is when we place the concerns for others ahead of our own needs.

Angelo, a retired middle aged client, had long resented his father’s old world Italian controlling manner in raising him. Except when he participated in organized sports, 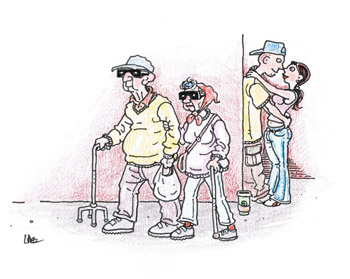 Angelo had to work every weekend and many nights in his father’s butcher shop. Especially during teenage years, when Angelo wanted to meet girls, meet more girls, and hang out with his friends, Angelo bitterly resented his father. His father said, “You do what I say when you live in my house or move out.” Given no real option, Angelo seethed and remained at home until he went away to college on an athletic scholarship. Angelo couldn’t wait to be released from what he saw as captivity when he went away. His father is still alive, and only recently did Angelo free himself from his resentment.

Angelo now realized how hard his father worked to support his family. It wasn’t that his father sat on his butt and issued orders, but that his father had the same work ethic for himself that he imposed on his kids. More importantly, which Angelo could only appreciate with the reflection of maturity, was that his father devotedly loved his mother. Angelo’s mother was a caring and nurturing parent who doted on her four children. In her 50s, she developed Parkinson’s disease and slowly deteriorated until she couldn’t take care of herself. With his eyes welled up in tears, Angelo described how his father fed his mother, and how, when his mother became incontinent, he cleaned the feces and changed her diapers. Angelo perceived that his father felt good about helping his mother. Angelo never heard a hint of complaint from his father. To me, that is profound love.

Romantic love is great, and intense, but I often wonder how profound it is. People in romantic love often profess how good the person they love makes them feel. Profound love is when you want the other to feel good. Even though romantic love is self-serving, I am not knocking it. Romantic love has a healthy component of lust to it. There is excitement that goes with the encounters. Yet, when Hillary, a 26 year old client, was in a relationship and confused about what to look for in a husband, I thought of Angelo’s father. I also thought of the many unhappy spouses and ex-spouses I have seen who married because of intense romantic love, without long-term relational considerations. I have certainly seen romantic love evolve into profound love. My wife and I are celebrating our 45th anniversary, and although we still fight, I am absolutely secure that Marilyn will be there to change my bedpan if needed. I know she is similarly secure.

I asked Hillary if she felt the person would be there for her when her tail is between her legs. I also asked her an easier question that few think about: Would she feel good to be there if he needed her?

Certainly, I am not suggesting that we marry someone we find unattractive or dull because they’re dependable. I am saying that one important consideration is the strength of the alliance. When things are going well, and we’re healthy and solvent, we become limited by our partner’s needs. However, when things collapse and we’re subjected to failures and stresses, can we count on our mate, and could s/he count on us?

I consulted for 20 years in a Birth Defects Clinic in St. Charles Hospital. I saw how many parents uncomplainingly subordinated their lives for the needs of their children. That’s profound. When Angelo recognized that this characterized his father, now in his 90s, Angelo wrote him a long letter expressing his appreciation and admiration.