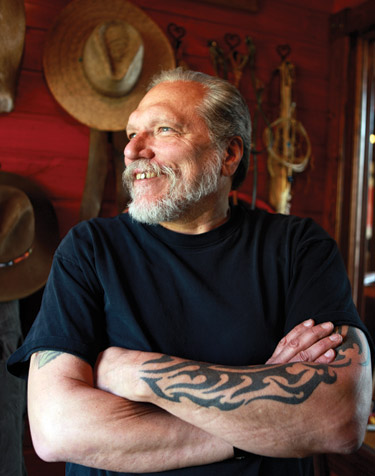 It’s hard to believe it’s been exactly 40 years since Hot Tuna released its self-titled debut album. What started as a side project of two of the members of San Francisco’s seminal band the Jefferson Airplane, Jorma Kaukonen and Jack Casady have become a beloved, treasured, American musical institution.

There are probably not many locales that Hot Tuna plays that harbor more affection for, and boast more of a shared history with, the group than Long Island. The band first played on Long Island on March 25th, 1970 at Suffolk Community College. Joining Kaukonen and Casady on drums was Joey Covington, who would play with both Jefferson Airplane and Jefferson Starship, and fellow-Airplane member, singer Marty Balin. The band would return to Long Island twice that year, on May 1st with the same lineup at Stony Brook, at the athletic field, and then much later in the year on November 24th, again at Stony Brook, but this time in the gymnasium. Joining Casady and Kaukonen was violinist Papa John Creach, who would become an integral member of the group’s most popular early albums, and drummer Sammy Piazza. They would return to Stony Brook three times in 1973 and play once at CW Post that year. They would go on to play at Hofstra in 1975 and then debut at the Calderone Concert Hall on May 4th, 1975, and Island Music Center on October 18th, while continuing to play LI college shows. They would continue through 1977, playing countless shows on Long Island and throughout the tri-state area, including many unforgettable shows at Bill Graham’s legendary Fillmore East, before disbanding for five years.

The band often performs as either electric Hot Tuna or acoustic Hot Tuna, although it sometimes does both in the same evening. The band comes to the Theatre at Westbury on July 17th for an electric set. Joining Kaukonen and Casady will be Barry Mitterhoff and Skoota Warner. Also sitting in with the band will be G.E. Smith. Steve Earle will be opening the show.

To mark the 40th anniversary of the band, the group will finally begin recording its first studio album since 1990’s Pair A Dice Found, for Red House Records, with Larry Campbell producing. Campbell has played with Bob Dylan and Phil Lesh, among others, and recently did wonders producing the last two solo comeback albums from Levon Helm. This new Hot Tuna album will be recorded at Helm’s studio in Woodstock.

Amidst all of this activity, Kaukonen took time to speak to me while he was occupying the desk and chair in the office of his wife Vanessa who runs the Fur Peace Ranch.

Kaukonen is a very easygoing man. He’s clearly very happy with where he is at this point in his life. He gets very excited talking about music and it’s this enthusiasm that makes him such a natural teacher. Adding to the fullness of his life is the latest addition to his family, a four-year-old daughter he and his wife adopted. Kaukonen also has a young son.

We began by talking about Hot Tuna and how the band decides between electric and acoustic performances. “It depends on what we’ve been doing,” Kaukonen stated. “It’s so organic. We kind of look at the venues. It’s been a while since we’ve done it electric. It seems like it was time, I guess.” Kaukonen added about Westbury, “It’s nice either way.”

Of course what makes Hot Tuna the band they are is the unique musical relationship Kaukonen and Casady have. While many think the two first teamed up in the mid-60s in San Francisco in Jefferson Airplane, they in fact were friends and bandmates as teenagers in Washington DC. 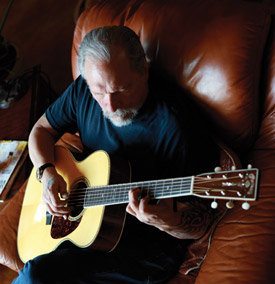 When I interviewed Grace Slick for this magazine a few years ago, she talked about how underrated Casady is. To this, Kaukonen said, “ I would have to agree with her. There were lots of talented people in the Airplane. The rhythm section of Spencer (Dryden) and Jack really defined the sound [of the Airplane]. Had Jack not been there, something might have happened and it would have been a totally different thing. He doesn’t do a lot of sessions. He doesn’t hang out a lot, but Jack is the best.”

When they were teenagers in Washington, while Kaukonen was into the blues, Casady was more into jazz. Casady’s older brother Charles, who Kaukonen knew before Jack, had a huge influence on him. “He’s the guy who turned me on to the blues of Muddy Waters, Howlin’ Wolf and Sonny Boy Williamson,” Kaukonen stated.

Another musician who became an important mentor and teacher for Kaukonen was Mike Bloomfield. Kaukonen talked about what a key album The Paul Butterfield Blues Band’s East-West album was for him. Both Bloomfield and Elvin Bishop played guitar in the group. Kaukonen met Bloomfield in 1965, just before East-West was released. Of the guitarist who would go on to form Electric Flag, make the classic Super Session album, be instrumental in Bob Dylan’s move from folk to electric music, and play with everyone from Chuck Berry to Janis Joplin, Kaukonen said, “He showed me a lot of stuff; how to bend strings, sustain notes and approach the role of the instrument as the role of other than a rhythm instrument.”

Kaukonen was one of the key guitarists of the 60s in ushering in psychedelic music. I asked Kaukonen who so many young white guitarists in the 60s, who cut their teeth on the blues, such as himself, Eric Clapton, Syd Barrett and others, were instrumental in the birth of psychedelia. “All of a sudden there was a blank canvas where you could create improvisational things that were longer than the songs themselves,” he stated. “That really hadn’t been done outside of jazz circles.” Kaukonen added that the blues of T-Bone Walker and B.B. King were more song-based. A blues artist who had an obvious influence on the young players of the time was Buddy Guy who Kaukonen said, “started stretching out.” He also added of this new improvisational sound that “Cream was one of the greatest performing bands I’d ever seen in my life.”

Kaukonen talked about Fur Peace Ranch and teaching in general. “Teaching keeps you really sharp,” Kaukonen said. He also said that it was important “to pass the music on and to make it accessible to people because it was made accessible to me. You start to think about what you’re doing in an intellectual way that you normally don’t when you’re just involved in the creation process. It makes us better players and more creative.”

Kaukonen said that his wife Vanessa is really the person who runs the ranch, which also is the base for an NPR radio show.

Near the end of our interview, the conversation turned back to Hot Tuna and Kaukonen again talked about his longtime friend and partner in Hot Tuna, Jack Casady. “We’ve always respected each other as men and as artists,” he stated. “Musically we’re both very honest in the way we present our art.”

In summing up what has been one of the most respected careers in American music, Kaukonen proudly stated, “I get to play with great people. I get to play the music I love. It doesn’t get any better than that. I’m a blessed guy.”