My Father’s Place, “The club that wouldn’t die.” Four decades ago, a kid from Rockville Centre had a vision. This vision became a reality for Michael Epstein (aka Eppy), who at the age of 22 was one of the founding fathers and owner of the now famous My Father’s Place, which was based in Roslyn. 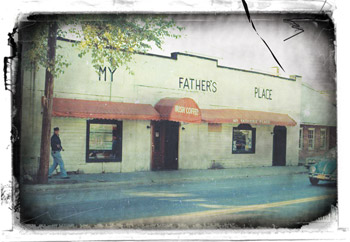 As a 15 year old, Eppy was in several bands as a guitar player in the Borscht Belt (the Catskills) before opening up a boutique in Roslyn.In 1971, Eppy and Richie Hersh along with Jay Linehan and his son Jay Jr. converted an old bowling alley in to what was to become one the most famous clubs in the country for developing and showcasing new talent. After an incredible run of 16 years, My Father’s Place closed its doors in 1987. Since that day, Eppy has produced and promoted many shows and is still quite active as a promoter and booking agent.

Jeff Krasner: Why did you decide to open up a club to begin with?
Eppy: Being a musician, I decided to work behind the scenes and develop new talent. I also thought it would be a great way of meeting women.

Jeff: What did you look for in the way of talent to play at the club?
Eppy: Back in the seventies, we looked to promote and develop talent that would get some airplay. Once the public was able to hear the bands on the radio, it was easier to drive them to the club. After a few years, WLIR broadcasted many of our shows live, hosted by Denis McNamara. This put My Father’s Place on the map. That was avant-garde radio at its best.

Jeff: Do you remember the first act you wanted to book?
Eppy: Yes, I actually called Lou Adler who at the time was a huge promoter and manager. I knew he managed Carole King at the time and asked if she would play my club. After laughing for several moments, he hung up on me. My first show when the club opened Memorial Day Weekend was Richie Havens who I knew from playing on the Cape. Richie opened the club and that’s when we got noticed.

Jeff: What are some of the major differences in the club scene from then to now?
Eppy: How much space do we have? In brief, the drinking age was 18 back then, so we attracted not only a younger crowd but a lot of concertgoers who wanted a place to drink and hear new bands that were just breaking. Today, that atmosphere doesn’t exist anymore. Back then besides My Father’s Place, there was CBGB’s, The Fillmore, and many other clubs that showcased upcoming talent. There was a large pool to draw from. Today we have some great new talent, but there aren’t many places to promote them.

Jeff: What changes do you see in the near future as far as the club business?
Eppy: Well, not too much in the immediate future. Most of the acts that play the smaller venues are cover bands and tribute bands. The radio stations have a totally different agenda in what they play, and because of downloads you can’t even find a record store anymore.

Jeff: What, if any, are your plans to continue promoting concerts today?
Eppy: Well, we are coming up on our 40th anniversary and are planning a concert series this summer. We will start with one or two shows a month and see how it goes. The public is very much behind us.