For all the attention places like California, Florida and the Carolinas get from vacationing golf nuts, Long Island has been in focus perhaps more than any other region on the world golf stage over the last decade. Bethpage State Park has held two US Opens, Shinnecock held one as well, and in 2013, not only will Sebonack host the US Women’s Open but National Golf Links will be the site of the Walker Cup. This year, the spotlight is on Bridgehampton-based Atlantic Golf Club, on which more than 200 golfers will descend for the United States Mid-Amateur Championship, set for September 22-30.

It isn’t the Open, and thus it won’t be televised and it won’t have a million-plus first prize. However, the Mid-Am is a massive test for those who qualify, all of whom have maintained their amateur status, are at least 25 years old and have a handicap of 3.4 or better. 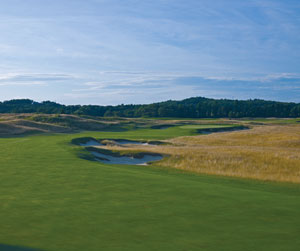 There isn’t just a prestigious championship on the line but also a berth in next year’s Masters and possibly more. They’ll have to earn it too.
“Like the Open, very few people are going to break par,” said Dennis Suskind, general chairman of the Mid-Am, “The greens are true and fast, the fairways are very tight and rolled, and off the fairway is fescue. It will be a challenge.”

That will surely be the case, whether it’s the mammoth 611-yard par-5 18th, or the tiny yet testy 128-yard 11th. In total, 264 players qualify, and after practice rounds at Atlantic and its partner for the event, The Bridge Golf Course, they play two days of stroke play. The top 64 cumulative scores are entered into match play, which will last six rounds, no short path to glory.
“You have to be a seasoned player to get through that pressure,” Suskind said. “An experienced amateur is going to win this.”

Atlantic will be ready for the country’s elite, as it was in 1997 when it hosted the USGA Senior Amateur, which was won by Cliff Cunningham. The Mid-Am will be the 66th national championship held in New York, third-most of any state. 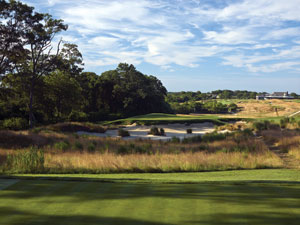 Atlantic opened 20 years ago and, for the championship, will play at a little over 7,000 yards. Stationed on what was an old farm in Bridgehampton, the course also has a knack for being windy, which will make it difficult for the competitors to control their drives and approach shots on what will already be treacherous albeit pristine conditions. The scenery is a given. Atlantic has long been recognized by Golf Digest as 100 Greatest Golf Courses in the country.

As seen on TV, the US Amateur has been won by the likes of Tiger Woods, Phil Mickelson and going back some years, Jack Nicklaus. The Mid-Am is more a target for post-college players, with Jay Sigel being a three-time winner of the event. He’s an example of one player who parlayed his amateur experience into an acclaimed pro career, having won 15 events. Such a trip is on the minds of many golfers who will invade Atlantic for the Mid-Am.

More than 300 volunteers will help the event go and from a fan’s standpoint, the price couldn’t be better. Admission to one of the country’s finest courses is free. For more information on the tournament, visit atlanticgolf.org.