Navy Beach captures the essence of Montauk. Just a few feet from Fort Pond Bay, with a spectacular (especially at sunset) view of Block Island Sound and Gardiners Island, this beach house restaurant is neither elegant nor ramshackled. Rather, it is, like Montauk itself, mellow, laid back and relaxing. Inside, Navy Beach is light-touch nautical with a few portholes, fishing rods here and there, shadow boxes that display vintage bathing suits and caps, well spaced bare, blue top tables, massive overhead wood beams from ships of yore and comfortable blue and white flecked chairs. Flickering candles in sand-filled jars and fishnet hanging lights illuminate the dining room while tables and umbrellas dot the beach outside.

If the underplayed interior and the sensational water views are perfect fits for Montauk, so too is the seafood-skewed menu. It is short, appropriate and consistently well-executed by Paul LaBue, a veteran East End kitchen commander known for previous stints at Nick and Toni’s, The Laundry and The Beacon. 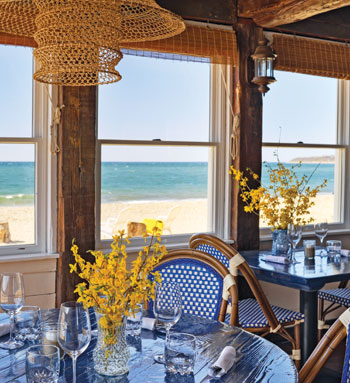 With the water of nearby Fort Pond Bay lapping onto the little beach that fronts the restaurant, only the unobservant will order anything but the fresh and in this case, creatively executed seafood dishes. Indeed, the only entrée misstep was the too-chewy steak in the steak frites ($26). After that, it was clear sailing with a grilled whole branzino ($29) with an enhancing sweet soy ginger dressing accompanied by cucumber slaw, jumbo, delicately battered seafood and chips ($21) with a generous helping of tender shrimp, scallops and cod and a rich rendition of summer lobster pie capped by an airy puff pastry lid and replete with sizable lobster morsels and fresh vegetables. An outstanding and substantial side of truffle mac ($9) was also noteworthy.

The starters were, if anything, even better than the main courses. Even diners who usually sidestep little neck clams ($12), flipped over Navy Beach’s version, a well-conceived meld of warm white beans and tomatoes given a welcome kick from some snappy chorizo. 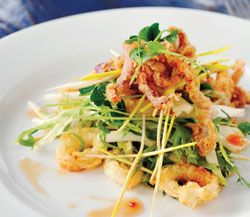 Key lime cheesecake, our first dessert choice, was unavailable as were two of the three rosés on the wine list (it’s a summertime choice of many diners.) Two of the remaining three sweets scored. Aside from a stalish chocolate lava cake that wasn’t warm or soft as it should’ve been, a berry Napoleon alive with fresh berries was like eating a piece of summer and a CMP (Chocolate ganache, housemade marshmallow and peanuts) sundae is a colossal concoction that would’ve been even more impressive in a sundae glass.

Navy Beach is agreeable and easy-to-take. The only possible problem here is finding this isolated, remote restaurant. It’s well worth the search. 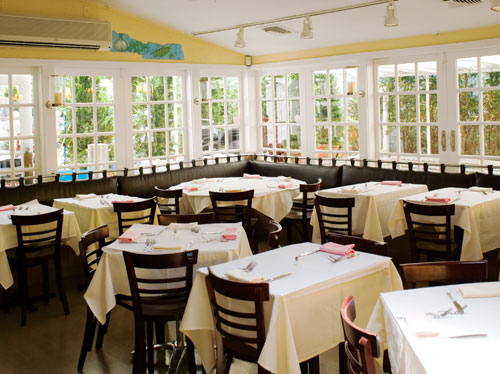 Serafina, a Manhattan transplant in East Hampton has become one of the East End’s hottest restaurants. On the night I visited, just about every seat was taken by 6:30 and it was standing room only by 7. Many of those seats were filled by Upper East Siders summering in the Hamptons who know Serafina from the City where it has five restaurants, three of them on the East Side. While Serafina, located on the site of the former Matto, has an attractive dining room with a cathedral ceiling of billowing white fabric, warm-weather diners are missing the point if they don’t opt for the outdoor patio under an overhead tarp that fends off the sun while allowing refreshing breezes to flow over its paper-covered white table cloths dotted with pink napery.

Serafina predictably exhibits many of the virtues and some of the conceits of its big city roots. Among its virtues are appetizers of tender, grease-free calamari ($9.75) fried in Italian peanut oil and served with a snappy tomato dip, a creative goat cheese and spinach salad ($14.95) of baby spinach, warm goat cheese, roasted pine nuts and honey that was slightly underdressed, and a fresh, terrific tricolor salad ($9.95), rimmed with pear slices and almost transparent shaved Parmesan.

Serafina’s much-touted thin-crusted pizza, in this case a Margherita ($14.95), needed plenty of salt to bring its flavor to life.

Unlike the pizza, Cornish hen ($22), usually a bland, safe choice for less than adventurous eaters, was a super entrée here. 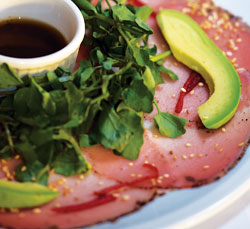 Most desserts are priced at $8.50. We sampled a satisfactory, tiny panna cotta, a large square of coffee dominated tiramisu and a gutsy brick oven apple pie that featured thin, upright slices of nice, ripe apples.

As to the conceits, Serafina has no butter, no soups and takes no reservations for parties smaller than six. Additionally, while bread is served with meals, patrons who want focaccia, something commonly found in the bread baskets of Italian restaurants, diners must pay $6 for it at Serafina.

Finally, as Serafina got busier, our service accelerated greatly in an unmistakable effort to turn our table over. By meal’s end we felt rushed as an unrequested check was presented the very second we had taken our last bite. An unfortunate ending for an otherwise respectable restaurant, serving some exemplary dishes.