This is for fans of new music and folks who generally enjoy a good story about doing something on your own, about finding the thing that makes you feel alive and happy and right. I want to introduce you to someone.

I first met Jaymay (Jamie Kristine Seerman) some time ago in New York City while she and I were performing at The Living Room on the same night. She was on the heels of a feature in Reuters (“I’m Famous, on the Internet” was the title of the article) that marked her as a rising star in the new digital age of music and the subject of repeated praise from my friend Ben Forstenzer. “You gotta see her, Alan,” Ben would say, “she’s awesome.” When I finally did see her, I walked in on this bright-eyed songstress playing gorgeous inventive modern folk and doing a spot-on imitation of a trumpet scat with pursed lips. The crowd loved her and she loved them right back. Something intimate and private was taking place that night…but in a very public way.

Fast forward a few years—which include a move to London, a stint with Blue Note Records and a wonderfully charming debut Autumn Fallin’—and we’re sitting with Jaymay at her parents’ home in Quogue drinking homemade iced tea and talking about growing up on Long Island, songwriting and the very cool things that are about to happen to her career.

“I was really shy when I was young,” she says, though I don’t really believe her. Being the middle child in a family of six kids (“all artists,” she says, “our whole life is documented”) probably means that you have to figure out ways to get noticed and carve out your own identity pretty fast, and it appears as if Jaymay may have tried them all. 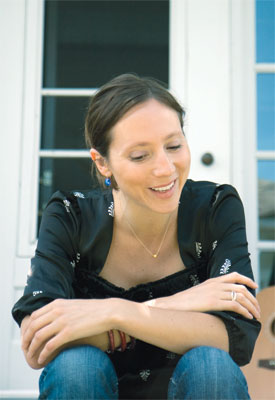 She loved (and still loves) art, especially the desperate and mad joy of Van Gogh and the Romantic Period. She played soccer, track, volleyball and tennis while being what she refers to as “a violin girl” throughout her childhood. Writing songs as a career showed up shortly thereafter and the success of Autumn Fallin’ set the table for a kind of moveable feast (she’s a Hemingway fan and avid reader) that seems to follow her around like bees to lavender.

“What I read becomes my reality,” she continues while discussing her newest EP Long Walk to Never, one of two new releases out this August with a third to follow in the fall. The title is a spin on Kurt Vonnegut’s beauty of a story “Long Walk to Forever,” in which the two lovers Catherine and Newt suspend time and transform their respective lives forever on a fortuitous jaunt through the woods. Jaymay’s lovers aren’t so lucky, but the song is just as gorgeous. There are references to Hemingway and Pulitzer Prize runner-up Christine Schutt here too, as well as two songs written specifically for happythankyoumoreplease, Josh Radnor’s new film that was adorned with all kinds of kudos at Sundance. In fact, all five of the songs on the new EP are featured in the film. Maybe Josh, who played Ted Mosby on How I Met Your Mother, has been a big fan since one of Jaymay’s songs appeared in a season finale of the CBS sitcom. It wouldn’t be surprising—Jaymay can illuminate serious crushes.

“I guess the idea that we’re all connected is a theme in my work,” she says, and I can’t help but think that the simple quirky logic she exudes in our conversation may indeed be the thing about her music that is most compelling. Jaymay carries a sincere, “irony-free” type of delivery that is sorely missed in contemporary “indie” music. 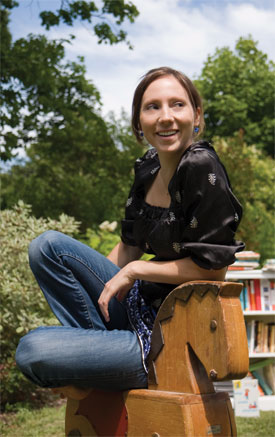 Sure there are moments of Regina Spektor and Feist in her work, especially in their childlike playfulness, but she’s honest and brave in the way Joni Mitchell was honest and brave. And she’s uncompromisingly original the way Dylan, one of her biggest influences, is uncompromisingly original. Her songs knit a timeless storytelling that is both now and forever. The You’s and I’s in her lyrics inevitably become the people who are most dear in the fairy tales and short stories that are our own personal narratives. “n anyone is u – ask anyone like…me,” she claims in “All Souls,” and follows with “if everyone’s like me / then everyone loves u…too.” That’s some sweet, poetic e.e. cummings-like logic right there. We smile.

There is a lot more I can say about Jaymay and her promising present, but I’m hoping you discover some of it on your own by seeing the movie (which premieres at The Angelika in NYC on August 20th) or catching her during her September residency at The Rockwood Music Hall. Our afternoon together on the East End of Long Island with the blazing sun making all the greens greener and the blues bright as diamonds shed some light on something that I think is really important. For some strange reason, this wonderful home of ours has always been a bit bereft of strong female musical role models—women songwriters and artists doing things on their own and for themselves. I’m not talking about the Mariah Careys or the Debbie Gibsons here, names that I grew up with, but rather women who dare to follow a more alternative path, perhaps. This is a little hard to talk about because, come one, there’s a side to all of us that loves Pat Benatar. But say you’re the girl in my high school English class who wants to write a song about a poem you read or you’re really moved by the foreign film you just saw at The Cinema Arts Centre. Or say you’re a great big giant nerd (like me) and you gravitate towards things that are literary, things that feel real and speak to the truths of human nature and all of our imperfections and desires and dreams. Say you’re that girl. Who are you going to look up to? Boys have Lou Reed and, more recently, a host of male-dominated south shore punk and emo-ish hardcore bands. The real alternative and independent female rockers (and I’m thinking now of Rorie Kelly, Cathy Kreger and Martha Trachtenberg, and a few others as well), the ones who defy definitions and boxes are unfortunately hardly in the public eye, at least not enough for my students to check them out.

So if you are that girl, were that girl or you are someone who knows that girl, there’s someone I want to introduce you to. Her name is Jaymay and she’s pretty cool. I think you two can be friends.

Find out more about Jaymay at facebook.com/jaymay. She will be performing every Friday in September at The Rockwood Music Hall in New York City. For details, visit rockwoodmusichall.com.