The past ten years have seen a rebirth in UK bands scoring massive success in their homeland and here in America. Along with Coldplay and Snow Patrol, Keane has been one of the key bands in this rebirth of popular music from England. While very successful in America, in England the band is huge and their latest eight-track EP, Night Train (Interscope), a loosely conceived project between albums, entered the charts at number one at home. The band comes to Brooklyn’s Williamsburg Waterfront on August 6th, as part of a brief American tour.

During a promotional stop in New York in the spring, frontman Tom Chaplin talked about the surprising success of the group’s new EP. What initially began as “a curiosity” of maybe two or three songs quickly blossomed into much more. “Once we got underway with recording, we just felt really inspired,” Chaplin stated. “Wherever we were in the world we got into a studio in a pretty haphazard and spontaneous way.” Chaplin talked about why the album, which the band never figured would go to number one, has been so successful. “The thing that really stands out and that people love most about the EP is the fact that it is a hodgepodge of different songs. We consider it a happy accident.”

Recorded at different studios at various stops in Europe and America on the group’s last world tour, the EP was named as a result of the fact that the band often travels by train on tour. Chaplin explained how a band who travels to so many different countries on tour ends up using trains as its favored means of transportation. “We prefer to be traveling on the ground,” he stated. 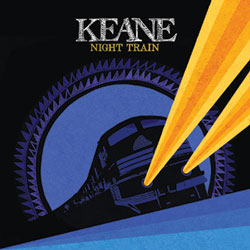 The new EP also is different from previous releases in the guests who join the band. There is a cover of the Yellow Magic Orchestra song “You’ve Got to Help Yourself” that features Japanese funk artist Tigarah. The cover came about after the other two members of the group, keyboardist Tim Rice-Oxley and drummer Richard Hughes, saw Yellow Magic Orchestra. In addition, Somali/Canadian rapper K’naan appears on two tracks, “Looking Back” and the album’s hit single “Stop For a Minute.” The initial recording of the two songs was not going well, so the band thought that working with someone from the world of hip-hop would push the songs “in a really interesting direction.” As for K’naan, Chaplin said, “We felt he was coming from a great angle as a hip-hop artist. He’s a very soulful guy. His songs are quite melodic. As it turned out, he was a real big fan of Keane.”

Chaplin talked about how Keane’s keyboardist almost ended up in Coldplay. “Tim and Chris [Martin of Coldplay] went to school together and had a close friendship, and Chris asked him to join Coldplay.” Of course, Tim never did join the band, which Chaplin thinks was for the best. “There probably wouldn’t have been room for two songwriters of the caliber of Tim and Chris in the same band. It would have been a crazy band.” Simon Williams of the UK record company Fierce Panda also shares a connection with the two, as his label was the first to release early music by both bands.
Keane is also known as one of the bands that is very involved in War Child, a charity organization that raises funds for children who are victims of the violence of war. In 2007 the band released Keane: Curate a Night for War Child, which featured Keane in concert, joined by Pet Shop Boys, Lily Allen, Teddy Thompson and Brendan Benson.

Chaplin summed up his hopes for the future of Keane: “I really hope we’re going to be one of those bands who stick around and have a long career. It’s a fickle world, but I do hope we can get the chance to make music and keep touring for a long time.”