Hideous Exuberance
Stephen C. Bird
Vox Pop Publishing
So you’re not a sappy novella lover or into cheap thrill novels either—you prefer ranting lunacy. You’re more of the William S. Burroughs meets perverted language times one hundred narrated by the criminally insane. If this sounds like your fit, then dive into the disturbed head of Steve Bird and go for an intoxicating and disgusting journey through Hideous Exuberance. The book is structured as a chain of bizarre character portraits of surreal specimens with names like Alison Sh-tbox and Gondolphus Clownhouse. More than one of these characters embraces “German sh-t porn” and eats “hot brown poo pie.” Despite its crude outward appearance, Hideous Exuberance is a moral work proposing a damning portrait of humanity, worthwhile life lessons notwithstanding.

Looking for Closure
Maria Stewart
Outskirts Press, Inc.
When your beloved aunt takes a phone call, heads out the door to make “an easy $10,000,” says she’ll be back in ten minutes and then never returns, what do you do? For author Maria Stewart she went on to carry out a thorough investigation of her aunt, Theresa Ferrara’s, disappearance. She examines police and court records, newspaper reports, interviews, new forensic technology and such information as mysterious phone calls and a psychic’s intriguing statements. As with some truths that are stranger than fiction, Stewart reveals the long suppressed secrets of corruption and lies related to her aunt’s possible involvement in the Mafia’s legendary Lufthansa heist (made famous by the movie Goodfellas), her role as an informant in NY drug deals and the possibility that the FBI ruled her death a homicide due to other circumstances altogether. No cheap crime thrills here, this one is real and local.

Paumanok: Poems and Pictures of Long Island
Kathaleen Donnelly
Cross-Cultural Communications
Paumanok, Long Island’s original name, has many gifted artists and Kathaleen Donnelly has featured two for every day of the year in her compilation Paumanok. She has collected beautiful poetry and images of Long Island captured by Long Island poets and photographers. Her unique display of Long Island is a perfect way to escape the hustle and bustle of our lives and relax, once a day, with some food for thought and striking images of our natural surroundings.

Siren
Tricia Rayburn
Egmont
For young adults looking for an adventuresome mystery read Tricia Rayburn has you covered with her first novel for young adults—Siren. It is a novel about a chain of mysterious deaths occurring during a family’s vacation in Maine and a 17-year-old girl’s determination to get to the bottom of her older sister’s eerie death. Siren is a perfect summer novel for readers 14 and up.

The 1800 Club
Robert P. McAuley
Publish America
So you want a page-turner that doesn’t require your brain to do backflips when you should be enjoying the sun and ocean breeze, then perhaps you should pick up Robert McAuley’s The 1800 Club. Travel back in time with the members of The 1800 Club who, dress in clothes their ancestors might have worn during the 1800s, and shift history into its proper trajectory. Mixed in with robotic probes and historical characters such as Lincoln, Teddy Roosevelt and Mark Twain The 1800 Club is a fun, light and adventuresome read. 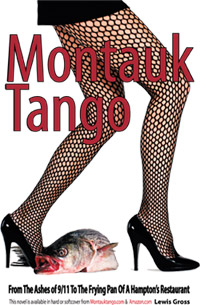 Montauk Tango: From the Ashes of 9/11 to the Frying Pan of a Hampton’s Restaurant
By Lewis Gross
iUniverse
The events of 9/11 displaced approximately 20,000 residents from lower Manhattan, Lewis Gross and his family among them. After 9/11 Gross was forced to move his family to their summer home in Montauk and describes his family’s journey to regain their lives after that fateful day. Montauk Tango is a warming story about the reality of life for those affected by 9/11, the struggle for adults to restart their career path, bringing a family together in tragic times, what it actually takes to completely start your life over and the real meaning of happiness.

Être the Cow
By Sean Kenniff
Health Communications, Inc.
Être means “to be” in French, which is what Sean Kenniff pondered one day as he stared at a pasture of sad cows. In a time of economic recession with so many of us feeling discarded, abandoned and fenced in, Sean Kenniff wondered, “When did we lose so much power over our own lives?” As Kenniff stared at a pasture of cows he thought, what does it mean “to be?” Sean studied the daily life of these cows resulting in his novel Être the Cow. The work tells a tender, haunting and provocative story through the eyes of a pasture bull who suddenly becomes self-aware and in tune with the heartbreaking insignificance of his bovine life.

Desaturated Soul
Gloria Golden
Xlibris corporation
If you are looking for a light picture book with deep meaning or a coffee table eye pleaser then check out Gloria Golden’s Desaturated Soul. Gloria Golden is an established photographer on Long Island and member of Women in Photography International. Desaturated Soul contains 96 photographs accompanied by prose she has collected over the years. Many of the photographs have been accepted in juried exhibits and won recognition such as “A Moment in Time” that was reviewed by the New York Times who declared that it looked “as if it was shot clandestinely.” Desaturated Soul is refreshing to many because it is a compilation of new work in the modern era but still has an Old World charm.

The Match: “Savior Siblings” and One Family’s Battle to Heal Their Daughter
Beth Whitehouse
Beacon Press
Christopher was the third child born into the Trebing family and they felt blessed to have him. But Christopher was also born with a job to do. The Match tells an emotional story about a family who decided to create a baby boy selected as an embryo that was a genetic match for a sister, Katie, suffering from Diamond-Blackfan anemia, a rare and fatal disease. Whitehouse follows the Trebings from Katie’s diagnosis through Christopher’s conception via in-vitro fertilization to Katie’s painful but successful bone-marrow transfusion. Whitehouse also touches on some of the ethical issues surrounding “savior siblings.”

Miller Place
Edna Davis Giffen, Mindy Kronenberg, and Candace Lindemann
Arcadia Publishing
Local authors and historians Edna Davis Giffen, Mindy Kronenberg, and Candace Lindemann collaborated to publish over 200 vintage photographs of Miller Place that take readers on a nostalgic journey through over a century’s worth of history. Miller Place features rare, never-before-seen historic photographs from both public and private collections, shows how residents and tourists spent their leisure time in Miller Place in the early 20th century, and captures long-lost structures that served as hubs for recreational activities for travelers and celebrities. Originally known as “Andrew Miller’s Place,” Miller Place flourishes with rich history that these three authors captured in this work.