When members of Maroon 5 were in high school, they formed a garage rock band called Kara’s Flowers. After developing more of a pop sound, they were signed to Reprise, but their first record didn’t take off, so frontman Adam Levine and soon-to-be keyboardist Jesse Carmichael headed to Long Island to attend Five Towns College in Dix Hills. It was the late nineties and the Los Angeles natives were exposed to a whole new world of music.

“It was multicultural and there were a lot of different kinds of music playing in the hallways,” recalls Levine. “This was when everything was fresh, everything was brand new. Jay-Z was coming up…and hip-hop was the burgeoning art form. It wasn’t about rock and roll at that moment. It was really about r&b and hip-hop, so I got way into a lot of it. It was like nothing I’d ever heard before.”

After their New York experience, Levine and Carmichael were ready to steer the band into a new, r&b-infused pop direction. Upon returning to LA, they reunited with bassist Mickey Madden and drummer Ryan Dusick, recruited guitarist James Valentine, and became Maroon 5. Hits like “Sunday Morning,” “This Love,” and the more anthemic “Harder to Breathe” from their debut, Songs About Jane, were a testament to the power of the quintet’s soulful pop rock. Matt Flynn became the drummer in 2006 and the success continued on their second, more electronic and funk-driven effort, It Won’t Be Soon Before Long, featuring the Grammy-winning “Makes Me Wonder.” 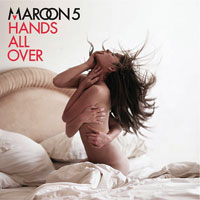 Recorded in Switzerland with legendary producer “Mutt” Lange (AC/DC, Shania Twain) Maroon 5’s third studio album, Hands All Over, comes out September 21st, and Levine has no qualms about calling it pop music.

“I think pop music is one of the most soulful types of music,” notes Levine. “There’s good pop music and there’s bad pop music, [but] I don’t think it’s necessarily a bad word like some people may think. Hopefully ours has depth and people realize that…the lyrics are a little more introspective. It’s important to be in touch with how you feel, and not just go out there and say, ‘Yeah, man, let’s dance and distract ourselves and party up.’ So, there’s a difference, definitely.”

The 15-track Hands All Over is filled with the band’s trademark falsettos, bittersweet lyrics and catchy melodies, such as the first dance-oriented single, “Misery,” which has appeared on numerous “hot summer song” lists. On standout track “Give a Little More,” the King of Pop’s influence can be heard down to the last “woo-hoo hoo,” while “Don’t Know Much About That” boasts a soulful, Motown feel. 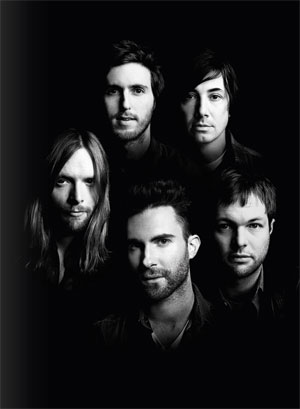 And, aside from the usual pop, funk and r&b, there’s a country-inspired ballad featuring Lady Antebellum called “Out of Goodbyes,” and a hard-rocking title track. Carmichael has said the overall sound is more organic, along the lines of their first record, and you can preview the new songs on their North American summer tour. Just don’t expect any bells and whistles when Maroon 5 hit Jones Beach with Owl City and VV Brown—it will be music straight up.

“Jones Beach is an amazing venue,” says Levine. “And we’ll have great sound and lighting, without any unnecessary frills. We’ve never been particularly outlandish with our performances, but I just think it feels right to scale things down and not have it be this huge overblown affair—which is not only a reflection of what’s going on in the world, but the way we feel about what we want to put out there. I think we just want to put on something simple, effective and emotional.”

Maroon 5 will be performing at Nikon at Jones Beach Theater on August 11th, with special guests Owl City and VV Brown. maroon5.com.