Dawn Riley is a sailor for the 21st century.

She’s at ease with a video camera in one hand while steering frothy circles in a runabout and barking out instructions to dueling sailboats along Oyster Bay Harbor.

Oh, and she looks more like a Hamptons socialite than a salty seaman. Did we mention she’s a woman in a man’s sport?

Riley, 45, has always been the pioneering type. Hell, she has a boat in San Francisco, a house in Michigan and a job on Long Island. But her latest venture as executive director of the nonprofit Oakcliff Sailing Center, which teaches competitive sailing, breaks new ground for an entire sport.

Everyone from novices to experienced sailors, 18-year-olds to retirees, descend on Oakcliff’s Oyster Bay digs to log nautical miles under the watchful eye of the world-renowned Riley. Oakcliff isn’t for beginners and it’s not an Olympic training center. What it hopes to be is a proving ground for everything in between.

“I’m really excited because we’re getting a lot of people who aren’t traditional sailors,” Riley said during a recent afternoon training session. “People are driving from New Jersey and Connecticut to come here on a Tuesday night.”

So far the foundation, which features 47 boats of various classes and launched in the spring, has more than 200 supporters at different membership levels. Riley hopes to grow that number to 1,000 by year’s end.

“She adds a more professional, elite level, to the program since she’s been involved in so many large programs and Americas Cups, sailing around the world,” said Andrew Wills, 26, a Seattle native who works at Oakcliff as a Swedish Match 40 captain. “She brings a very high level of intelligence in the sport.” 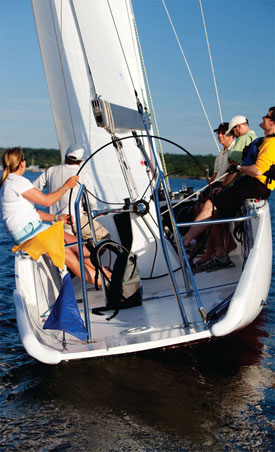 The brainchild of noted investor Hunt Lawrence, he began collecting boats the way Jay Leno stockpiles cars. Yet his passion for racing meant that he often owned six of the same class of boat. Lawrence wanted them to be sailed rather than waste away in storage. The foundation bloomed from there. Riley was brought in to help move the project forward and then agreed to stay on to run the day-to-day operations.

“There is no helicopter pad boat in the Caribbean. They are very much Oyster Bay, Long Island-centric,” Riley said of the Lawrence family. “The family is sweet, down to earth. And not just because they are creating this great opportunity for sailors. They’re just nice people. I have no idea why they collected these boats. But I’m really, really happy they did.”

Riley straddles the two worlds effortlessly. She can talk dollars with donors and “balls of steel,” a racing tactic, in the same breath. The Michigan native served as past president of the Women’s Sports Foundation and CEO and captain of America True, the first woman to manage an America’s Cup team.

Her desk rests on cinderblocks in a nondescript warehouse in an industrial section of Oyster Bay. Not the most impressive setup for the executive director of a non-profit with a $2 million budget. That’s okay. Riley’s real office is the horseshoe-shaped waters of the bay itself. She is, after all, one of America’s foremost sailors. 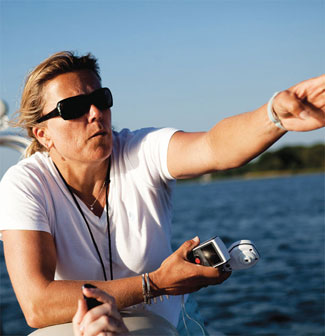 “Right now the family is sponsoring the foundation,” said Riley, who can be found on the water six days a week. “My job—part of my job—is to find enough other revenue streams so it becomes more of a shared support as opposed to just one family.

“It’s completely unique and I’m finding there are people who are more optimistic than the economists. And I’m finding there are people who don’t have a lot of dollars right now—maybe they are unemployed—but they have time. They can work their sponsorship/donation down by volunteer days. And having people volunteer is just as valuable as 100 bucks to me. We need people to help schlep all the sails and get things moving.”

Oakcliff doesn’t give off an elitist, yacht club vibe precisely because it’s not. Call it populist sailing with an edge. You too can get out on the bay for a donation of as little as $500. Just ask Hicksville resident Walter Gaylor, 68, a boat owner looking to up his sailing IQ.

“I was looking for a new experience and I think I’m getting it there with people who have a lot more sailing experience than I do,” Gaylor said. “And they have quite a collection of boats.” 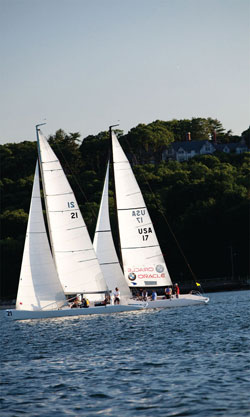 Riley is hands on, especially on the water. Long Island Pulse spent an afternoon shadowing her as she oversaw match races from the perch of her inflatable runabout.

As she cycled between boats, Riley yelled out stream of consciousness play-by-play while aiming her Flip camcorder at the action. She uploads the video online, which gives her students instant and unprecedented feedback.

“Tack!” she shouted repeatedly at one captain.

And when the boat didn’t, it crept heart-poundingly close to its rival.

Riley spent an anxious moment looking on as two of her prized boats raced within mere inches of each other, which is why the fleet is fitted with bumpers molded to the bow and stern. With tight turns and tense encounters, match racing resembles a slower more elegant version of NASCAR—only with the pit crew along for the ride.

“It’s not supposed to be, but occasionally this becomes like dodger cars,” Riley said and cracked a smile. 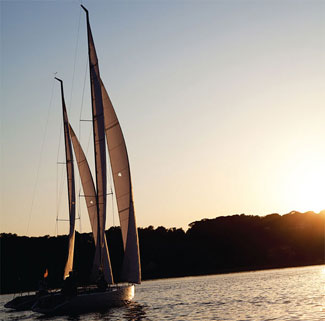 Riley knows adrenaline rushes. She was the first woman to have a physically active role in the America’s Cup as a crewmember on the America3, which brought home the 1992 Cup. She’s competed in the Whitbread Round the World Race. And she won the 1996 Sydney Hobart Yacht Race aboard Morning Glory in record time, also one of the few times she ever got seasick. Known for its grueling conditions, only 44 of 155 yachts finished the 1998 race after famously sailing headlong into hurricane-force winds.

“I got the prize money and the T-shirt, so I decided I never had to do it again,” Riley said of the Sydney Hobart.

With a sailing season stretching from April to November and a never-ending quest to build the brand, Riley is now locked in a race as grueling as any she’s ever faced. It’s a marathon actually. But she’s enjoying the rush. After all, she’s out front once again, a pioneer riding the wave of a next big sailing movement.