…and I have photographic proof!

The above shot of Great South Bay Brewery’s founder/head brewmaster, Rick Sobotka, was taken at last Saturday’s North Fork Craft Beer, Wine & BBQ Festival at Martha Clara Vineyards. The event was a huge success, with thousands of beer and wine enthusiasts flocking to the vineyards to soak up the sunshine, consume quality drink, and most importantly, to support Long Island and it’s flourishing local scene. 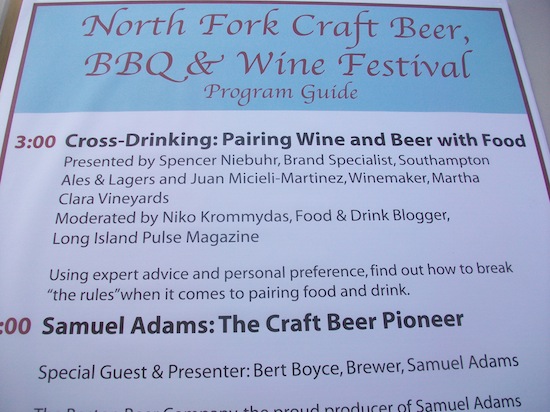 I had the pleasure of moderating the first of three panels at the festival, a discussion on pairing beer and wine with food. My guests were Spencer Niebuhr, Brand Specialist at Southampton Ales & Lagers, and Juan Micieli-Martinez, Head Winemaker at Martha Clara. Both fellows utilized their years of experience in their respective industries to provide insight on what to examine while pairing, and how one can experiment effectively while doing so. It was a fun experience, and I hope I can participate in something like that again.

Brew of the festival goes to Rocky Point Artisan Brewers (http://www.rockypointartisanbrewers.com) and their dark, coffee-like lager, which I found became richer with every subsequent sip. I’d like to head down to the three-man (Donovan Hall, Mike Voigt, Yuri Janssen) brewery in the near future and pick their brains about personal philosophy, not only on beer-making, but also in terms of mass production and industrialization versus individual craftsmanship, which is discussed in their 8/14 blog entry, “artisans and craft.” The trio seem to create for passion, love, and personal fulfillment, not accolades, and it shows through the high quality of their beer. Kudos. 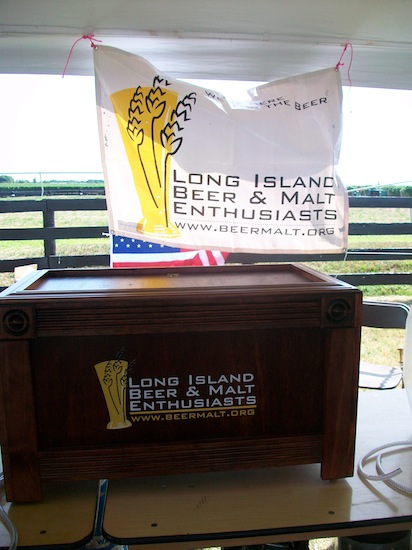 I don’t think I need to give my pick for “Most Interesting Brew” of the festival. If you happened to stroll by the Long Island Beer & Malt Enthusiasts (LIBME) tent and caught glimpse of a blue-green liquid floating in peoples’ tasting cups, that was member Todd Long’s ultra-sour concoction, Electric Kool-Aid. I’ve never seen a more diverse reaction to a beer before, so for that alone: congratulations, Todd.

On a final note, I would like to send thanks to those who introduced themselves as regular readers, those who purchased a t-shirt or two, and even those who just commented on how the Hogan vs. Warrior fliers were total awesome-sauce (and for the record, they totally were). I encountered a lot of new faces and received a lot of positive feedback about the blog, and it makes me proud to know that people enjoy reading and following my “Super Neat Beer Adventures.” I’m working on some real exclusive and exciting schtuff to push Super Neat… through 2010 and further, so stay tuned.