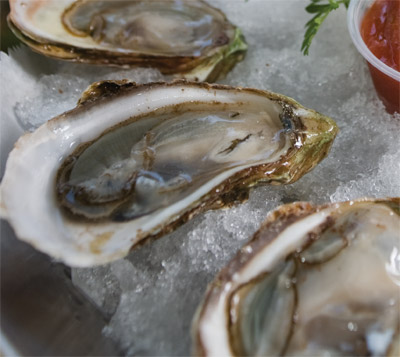 There’s no better time to visit the Hamptons than autumn. There’s no better month than September and there’s no better restaurant to capture the relaxed, laid back spirit of the season and the area than a place like Bostwick’s Chowder House. Diners can sit outside soaking up the last warm rays of the sun under green umbrellas at too tiny tables covered with red and white oil cloth.

Bostwick’s Chowder House is an amalgam of Cherrystone Clam and Lobster Shack and Bostwick’s Seafood Grill, located where Snowflake once stood on Pantigo Road, better known as Montauk Highway. It’s a rough and ready roadside restaurant offering a menu and blackboard of no surprise traditional American seafood favorites. Think chowders, bisque, fried clams and oysters, fish and chips, local flounder and swordfish and especially lobster rolls. The last is the heaviest, biggest and best of its breed on the East End or perhaps anywhere in Christendom. Its piled high super fresh lobster meat spills to either side of the king sized hot dog bun that can’t quite hold its contents. Accompanied by two sides of above average cole slaw, average French fries or reasonably good potato salad, it’s priced at an entrée level ($21) and worth every penny of it.

Before going any further, it should be said, (if you haven’t already come to the conclusion) that Bostwick’s is anything but a sleek, sophisticated spot with silken white glove style service. Though the waitstaff is usually friendly and competent. 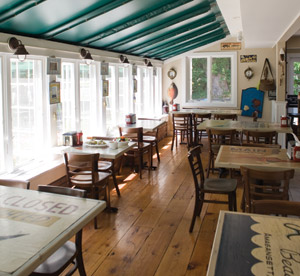 For instance, don’t be surprised if entrées arrive while you’re still on your appetizers (ours did) and whether you’re outside, on the gravel floored patio or inside in the simple bare bones fish house dining room, don’t look for a breadbasket, there is none, and be prepared to eat with plastic utensils out of plastic baskets. If such niceties matter little or not at all to you, sit back and dig into the likes of plump, whole clam bellies ($19), New England and Manhattan clam chowders ($6), lobster bisque ($7), fresh local fish specials of the day or steamed lobsters. Wash them down with one of the local wines and then check out the limited, homey dessert list of cookies ($8), soft ice cream ($2-$5), key lime pie ($5), watermelon ($3), root beer float ($4) or a milkshake ($5).

Those chowders are dense with varied first class ingredients, the bisque has a welcome touch of Sherry and the four baked stuffed clams in the well seasoned appetizer were generously laced with clam bits. They looked blackish and overcooked on their surface but tasted just fine.

Diners seeking flavor, taste, quantity and quality should temporarily ignore all the warnings they’ve heard about avoiding fried foods, for they are among the most outstanding picks at Bostwick’s. Comfort food classics such as monster sized fresh whole clam bellies, sensibly and sensitively battered, accompanied by a diminutive bit of tartar sauce, and fried oysters with a heady, vibrant remoulade sauce are unqualifiedly recommended. A grilled swordfish special that was as smooth as snow benefited from a blanket of capers and scallions with sides of sautéed red potatoes and cole slaw.

Desserts seemed almost anticlimactic. There are Snowflake throwbacks like that soft serve ice cream with various toppings, milkshakes (chocolate or vanilla) with a ton of that same soft serve ice cream (ditto for the root beer float) and a key lime pie with a tart, tangy taste. Best of all was the dessert of the day, a slice of gooey, decadent, deeply flavored chocolate layer cake.

The word is out about Wild Honey on Main in Port Washington. Very shortly after it opened, invited friends and family mingled with paying customers; the newly arrived baby brother of Wild Honey in Oyster Bay was packed on a weeknight. The forty seat storefront spot is owned by Tina and Rob O’Brien, the husband and wife team that have successfully operated Wild Honey in Oyster Bay for six and a half years and failed to replicate that success at Wild Harvest in Glen Cove. The tiny, cozy Port Washington outpost is a more appropriate size and style for the O’Brien’s than the cavernous, Southern skewed spot. 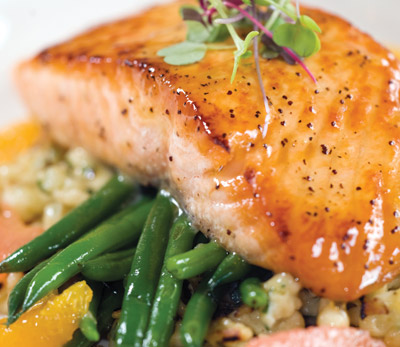 They carried over a number of Oyster Bay favorites (like the crispy calamari with Thai barbecue sauce), put a number of interesting spins on others and added some completely new dishes as well. They’ve also moved Roberto Caez, their German-Cuban chef from Oyster Bay. (He will now rotate between the two.) The result is a culinary jackpot for the O’Brien’s in Port Washington.
Wild Honey on Main is a small, narrow and charming place of brick, mirrors, Middle American landscape art, white tablecloths and high ceilings where Bistro du Village had been. Despite those high ceilings, its hard surfaces generate a noisy din. And despite all the hubbub, the upbeat Tina O’Brien seems well able to handle the entire dining room by herself.

A preview of the menu’s sophisticated fare that features creative ingredient combinations was illustrated by a complementary amuse of spice rubbed veal and thin peach slices topped by a dollop of caramelized shallots. It was a harmony of sweetness and pungency. That menu ranges from simple and satisfying to sophisticated. There is also an appealing tapas bar menu ($6 to $12) that is served at tables as well as the bar. 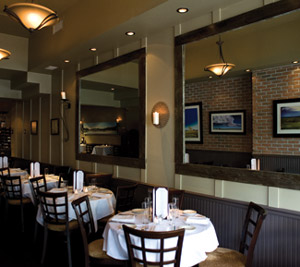 A beautifully cooked piece of crunchy and tender cracklin’ pork shank ($24) topped the list of entrées. This mellow, mammoth meat, perched on a bed of creamy saffron orzo is much like pulled pork with a Sherry wine glaze. Consider the jalapeño jack mac and cheese ($6) as a side. Not to worry about the jalapeño, it bestows just enough kick to elevate the dish above standard versions.
Desserts are a bit more limited than the eight appetizer and eight entrée choices, especially when the sorbet and berry (both $6) possibilities are eliminated. The sour cream cheese cake ($8) is standard stuff and the respectable warm summer peach cake ($8) is dominated by its spiced caramel. Two super sweets are the iron skillet smores pie ($8), a layered affair of decadent, dark chocolate ganache on a sweet graham cracker crust sealed with a cap of tiny toasted marshmallows. But the ultimate chocolate and vanilla finale is the cake and shake ($9), a warm, gooey chocolate cake next to a glass of vanilla malt shake festooned with fresh, real whipped cream…yes!