“Unable to love each other, the English turn naturally to dogs.” –J.R. Ackerley

No one knows exactly when the first animal became a pet. They are now so common that we take them for granted, giving little thought to this inherently odd process of taking wild creatures into our home and forming close relationships with them. We carefully scan their faces and body language for clues as to what they are thinking and feeling, often with some success, but ultimately must accept that there will always be an enigma at the heart of our interactions. 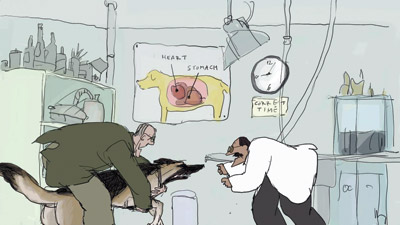 Of course, if we can’t understand them, one can only imagine their confusion at our deeply strange behavior. Although it may be partially based on misunderstanding, there’s no question that the love we receive from our pets is (or at least feels) simple and direct in a way that humans can never offer.

J.R. Ackerley (1896-1967) was a noted British writer and literary editor. In addition to writing novels and memoirs, Ackerley helped promote the work of young authors like Philip Larkin, W. H. Auden, Stephen Spender, and Christopher Isherwood. Ackerley was always searching for an “Ideal Friend” to share his life. Although he was openly gay for much of his life and had several long-term relationships, Ackerley never found a person who could embody that concept, but had better luck when he adopted an “Alsatian bitch” named Queenie in 1946.

Most films about pets lean towards broad comedy and sentimentality. Paul and Sandra Fierlinger’s witty and visually striking adaptation of Ackerley’s novel, My Dog Tulip, is a rare and delightful exception. 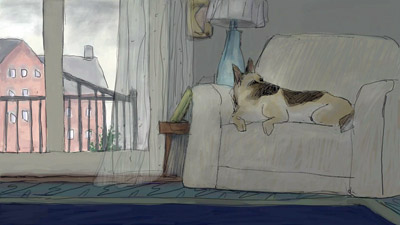 Using the full expressive power of hand-drawn animation, the Fierlingers beautifully adapt Ackerley’s drily humorous prose about his fourteen years with Tulip (the publisher changed the name because they thought Queenie would encourage jokes about Ackerley’s sexuality), the dog with whom he formed the closest friendship of his entire life. Through a mixture of quotidian moments and dramatic events, they wonderfully evoke the joys and surprises of a shared life.

The animators are well-assisted by a brilliant narration by legendary star Christopher Plummer that captures every nuance of Ackerley’s wit. The magnificent Isabella Rossellini (as a veterinarian) and Lynn Redgrave (as Ackerley’s disturbed sister who engages him in a fearsome fight for Tulip’s affections) round out the fine supporting cast. 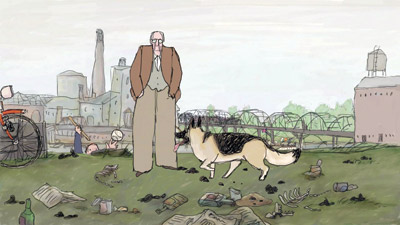 While My Dog Tulip is fairly restrained in a typically British manner, it isn’t necessarily for kids, at least not unless you want to talk to them about sex. A significant chunk of the film is dedicated to Ackerley’s challenging attempts to provide Tulip with a mate and “the pleasures of motherhood.”An encounter with a male Alsatian whose undescended testicle makes all efforts at mating futile is particularly memorable.

My Dog Tulip is a quietly magical and very funny portrait of the unique bond that can form between us and our pets. No one who has experienced this friendship should miss this movie, but dog lovers will obviously find it particularly pleasurable.