Two of the most beloved bands of the 60s were Booker T. and the MGs and the Rascals. While they each hailed from very different musical regions of the country and one band was primarily an instrumental group, the two bands now have a common link. Felix Cavaliere, the lead singer and keyboardist of the Rascals and Steve Cropper, guitarist with Booker T., have recently put out their second album as a duo, Midnight Flyer (Stax), a followup to their Stax debut, Nudge It Up A Notch, which was released in 2008. The pairing of these two musical legends works so well because both albums avoid sounding either too retro or too modern. Oddly enough, these two legends of rock, pop and r&b met up in Nashville, where they both live. The latest release also comes at a time when Cavaliere rejoined the Rascals for their first concert in years, which was a benefit for the Kristen Ann Carr Fund.

A few days before the release of their latest album, I talked to Cavaliere from his home of nearly twenty years in Nashville. Cavaliere has not lost his New York accent and for many fans, he remains a seminal figure in New York-based pop and rock from the 60s. It was collaborating as songwriters that brought the two legends together. “I’ve been concentrating on writing for the past twenty years,” began Cavaliere about his time in Nashville. As for having worked with Cropper, he said in the 60s, they worked together live. Meeting up in Nashville, they started writing together and then producer/musician/songwriter Jon Tiven suggested the two make an album. Cavaliere felt that mixing Cropper’s r&b and blues background and his New York r&b and jazz background is what gives the music its unique sound. Cavaliere wasn’t sure how the project would go, but he said that after the debut album was nominated for a Grammy, “We were very pleasantly surprised that we were asked to do a second one.” Cavaliere talked about the difference between the two albums. “I wanted to take a lot more time to write the songs for this one.” 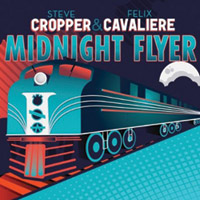 He also feels that the latest album is “a little bit more modern without sacrificing our links to the past.” As for the possibility of performing live with Cropper, Cavaliere is not sure since both artists have many other projects in the works.

For Cavaliere, one of those other projects was the first concert of the original four Rascals in decades. The benefit show, organized by Steve Van Zandt, who inducted the group into the Rock and Roll Hall of fame in 1997 with help from Paul Shaffer and Bruce Springsteen, took place on April 24th at the Tribeca Grill in Manhattan. It was the first time all four members did a complete concert in thirty years. In the late 80s, Cavaliere, Gene Cornish and Dino Danelli, without Eddie Brigati, tried to do some shows, but “it wasn’t a good vibe,” reflected Cavaliere. “I’m sorry it ever happened.” Cavaliere talked about the historic reunion. “Everything went smoothly. Everything went well. Everyone enjoyed themselves. Everyone got along. Of course, it’s difficult after so many years. People don’t realize how many years ago that was. People seemed to like it.” Cavaliere discussed some of the obstacles that have prevented a Rascals reunion from happening in the past. “We’ve had a lot of difficulties in the past with legal issues. You kind of grow out of each other. I would personally rather go on to new things.” As for future reunions, Cavaliere said, “Oh, yeah…if something comes up that really makes sense.” Cavaliere also said that there is a possibility that either a CD or a DVD of the reunion concert would be released.

Cavaliere came back to his two albums with Cropper and said, “We have a lot of fun with this. The cool thing is just to be able to make music.”