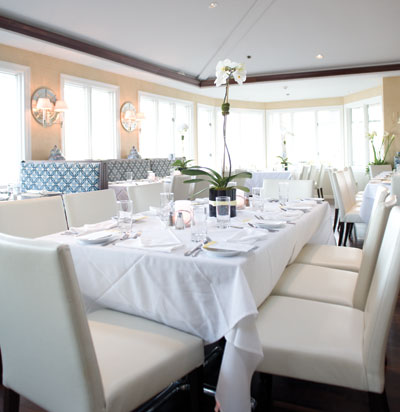 Despite its hundreds of miles of coastline, Long Island has relatively few waterfront restaurants and even fewer outstanding ones. Unfortunately, many, perhaps most, local waterfront spots rely almost wholly on their spectacular sites to attract diners, unlike those in Europe that often regard their location as the first step toward excellence to be followed by a gifted chef and a knowledgeable, efficient wait staff.

Riverview in Oakdale, a well established seaside spot beautifully situated on Great South Bay where William K. Vanderbilt’s “Idle Hour” estate once stood was typical of the genre until it recently changed its name (to View), chef, menu and philosophy. What once was an everyman, high volume operation especially popular for weddings, confirmations and other catered affairs serving safe, respectable but less than creative and exciting fare, is becoming an innovative, sophisticated eating place with a heavyweight chef and a menu featuring the likes of Thai calamari, Peking duck tacos, bread crusted yellow tail snapper, sea scallops with a Montauk lobster risotto and a sushi bar.

The inside of the revamped, reincarnated 23-year-old View is more impressive than ever. 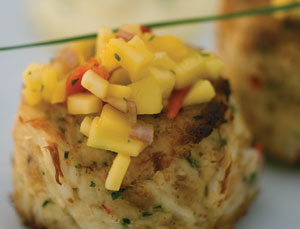 The sweeping seascapes outside can be seen through wraparound windows by everyone in the light, bright dining room as well as the hearty souls eating on the outside deck. An antique wooden boat hangs in the rafters of the main dining room with its slanted ceiling and skylights. At the center of the room are tall silver lined lanterns that hold stubby, flickering candles. The Executive Chef William Muzio is a Long Island graduate of the Culinary Institute of America who, after traveling and observing throughout Europe and Asia and a stint at Le Bernardin in Manhattan, has returned to his roots at View.

His Thai calamari ($12), sprinkled with crushed peanuts and enlivened with cilantro, lime and sweet chili glaze, delivers jump-off-the-plate zing with flavor and is a must order. Both the jumbo lump crab cakes ($13) with lump rather than shredded crab and the generous portion of jumbo lump crab cocktail ($14) laced with thin slivers of sweet onion are also recommended starters. By comparison, the wrap and roll, ($11), an overcooked chicken and shrimp spring roll, was ordinary. Three of four entrées received high marks. The roasted sea scallops ($25) were sweet and their lobster risotto centerpiece was enlivened by its citrus beurre blanc while two flatfish, the yellow tail snapper ($24) with its thin bread crust and the roasted Atlantic salmon ($22), were fresh, delicately cooked and sizeable. The fourth, lobster pasta ($23) was pasty with hard, bullet-like cavatelli and scant lobster meat.

The two best ($8) desserts were the dense, rich Valrhona chocolate bomb and the tasty strawberry-rhubarb cobbler that was a tad too hot, no doubt from a microwave. A circular, wild berry cheesecake was standard stuff and an ill-conceived deconstructed Yuzu fruit parfait neither looked nor tasted like a parfait.

Service, while earnest and affable, was a step or two behind the food. Despite that sushi bar and I’m told a sushi menu, we didn’t get one (diners who don’t know it exists can’t and don’t ask for it). Additionally service niceties like the runners delivering dishes knowing who ordered them, wine arriving before, not during main courses and busboys and girls waiting until everyone at the table finished before clearing plates were not among View’s virtues. 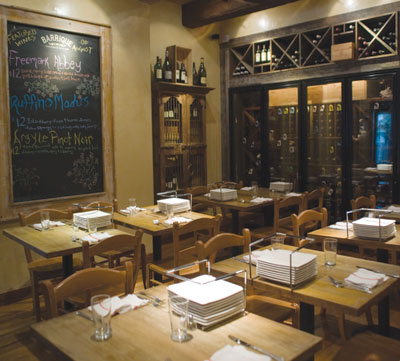 Barrique’s name is perfect—conveying as it does the affection and respect this year-old Babylon Village restaurant has for wine. A barrique is a small oak barrel used for aging wine. The Barrique Kitchen and Wine Bar is a rustic spot nestled on a quaint brick lined alleyway that offers 150 bottles and 40 half bottles of wine as well as wine flights, three or six ounce by the glass pours and any bottle by the glass to diners who agree to buy two glasses.

Additionally, this cozy, convivial nook with its brick and beamed ceiling, candles, French dish rag napkins and bare wooden tables is filled with wine bottles, barrels and wooden wine crates that give it the feeling of a wine cellar.

Yet the emphasis on wine is only half the story at Barrique. Chef Pierre Rougey’s sumptuous small plate creations are the other half. Mr. Rougey who presided at Emerson’s at this location has created an inspired array of satisfying dishes. His ingredients are fresh and distinct, his portions are right and his presentations are clear. Using French techniques to produce Mediterranean flavors on small plates, none of which costs as much as $15, his menu offers sharing, sampling, mixing and matching possibilities galore. Indeed that’s the way to go since dishes come out of the kitchen as they’re ready rather than as discernable courses.

Merquez spicy lamb sausage ($12) is charred just so on the outside and perfectly moist inside. 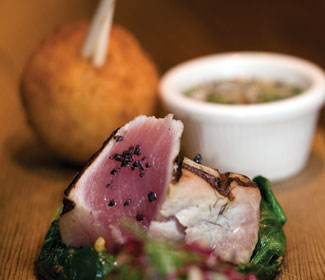 Five mellow veal meatballs ($12) each crowned with a squiggle of ricotta cheese (that looks like whipped cream) that’s sprinkled with pine nuts are boldly flavored. A super bet is the braised short ribs ($12), a soft, boneless mountain of meat with creamy mashed potatoes in a vibrant Cabernet sauce. Tender grilled scallops ($13) are given a sweet undertone by their orange salad and spicy carrot. Two crab cakes ($11) over black bean salsa drizzled with a sit up and take notice chili aioli is tasty, but short on crab (it’s shredded not lump).

Two super starters for the whole table are the cheese platter presented on a board and the Margherita pizza ($12) specked with roasted garlic. The nine cheese choices cost $12 for two, $16 for three and $20 for four.

They come with apricots, toasted almonds and honey. We picked Brie, Fontina and Gouda, all of which were culinary bell ringers. The pizza, enough for four diners, is tasty with a thin, crackly, blistered crust that’s limp rather than crisp.

The chipper, accomplished wait staff here conveys its knowledge of food and wine with enthusiasm rather than superiority. Every one of them is passionate and informed about the food and wine offered at Barrique.
The eight modestly priced sweets ($3.50 each) on a display tray are served in small parfait-like glasses. The eight-layered choices feature fruit, cake and plenty of whipped cream. The four we sampled were all fine: A trifle-like mixed fresh fruit amalgam; a deconstructed apple pie alive with crème anglaise, caramel sauce, sautéed apples and whipped cream; and two, dense, rich creamy concoctions—chocolate and rocky road.

Finally two caveats: Barrique is a small, popular, no reservation restaurant that fills up quickly so get there early. If you value civilized conversation and the weather cooperates, opt for an outside table. Inside ear piercing noise reverberates off the restaurant’s hard surfaces making table talk difficult to impossible.