Amanda Sobhy is famous in squash circles, which is to say even the closest of classmates at North Shore High School in Sea Cliff have no clue what the fuss is all about.

“No one who goes to North Shore knows what squash is,” said Sobhy, a 17-year-old senior.

Squash has roots in 16th century France and the smarmiest of prep schools. Don’t let that throw you. It is fast and aggressive but also more complex than its American derivation—racquetball. Squash uses a bigger racquet, a ball with less bounce and well-defined areas of play.

The game, played on a walled court, requires strategy, patience and energy. It is also one of the few sports Americans don’t dominate.

Enter Sobhy. She became the youngest player in the history of squash to win four professional events at the age of 16. Then in June she won the Women’s World Junior Squash Championship, making her the only US player to ever win a world title.

Her big moment came June 29 in Cologne, Germany, facing Egyptian Nour El Tayeb, a rival who had beaten Sobhy in three prior meetings.

“I wasn’t thinking I could win it,’’ Sobhy said. “But my father gave me the incentive that if I won, I could go five days anywhere in the world with a friend of my choosing. That gave me some motivation.”

Sobhy shook off a slow start to win in four sets. Ibiza anyone? 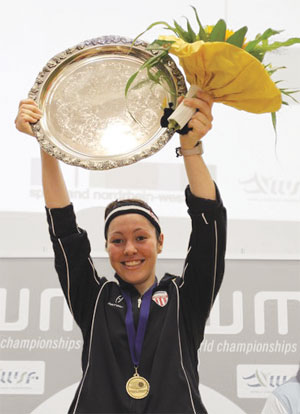 Sobhy sings classical choir and plays French horn in the school band. She tries to live the typical Long Island teen existence. Except she is renowned in the squash world, which happens to be a vast global network.

She is an international player enjoying a breakthrough year on the world squash stage. The sport took her to five continents in two months over the summer: Egypt, Germany, France, the Netherlands, Singapore, Australia and home again. And she is only seventeen!

Sobhy, ranked 35th in the world on the pro tour, is one of three females chosen to represent the US at the Pan American games in Guatemala in November, followed by a women’s world team event in New Zealand in December.

Truthfully, Sobhy was born to play the game. Her mother, then Jodie Larson, and father met at a tournament in the City. Now her father, Egyptian-born Khaled Sobhy, doubles as her coach. Older brother, Omar, plays squash at George Washington University while younger sister Sabrina, an eighth grader, is ranked No. 2 in the US under-15 division.

“We talk a lot about squash in the house,’’ Sobhy said. “It’s a huge part of our lives. So it brings us together.”

And it will send her to college. Harvard, Princeton and Yale each have squash programs and are on Sobhy’s short list. Going pro might be a real possibility, except that there’s barely enough money to pay expenses.
“Will I go to the pro tour or college? That’s one of the questions people ask,” Sobhy said. “I’m choosing the college path. If I didn’t go to college, there’d be a chance I could be Top 10 in the world in a few years. But college is more important.”

So the Nike Air Sobhys and other endorsement deals will have to wait. College is the next stop on Amanda Sobhy’s surreal journey. It’s taken her so far already. Who would have a guessed a girl from Sea Cliff would rule a sport once played by French kings? Certainly not the kids at North Shore.