Since the Beatles, much of pop music for many years was dominated by groups and artists who wrote their own songs. Yet, during the 60s heyday of musicians who wrote their own songs, there were a handful of songwriters who really were first and foremost songwriters and not performers. While some of those pure songwriters were also producers, arrangers and even did sing their own songs, only a handful could stand shoulder to shoulder with the great rock songwriters of the day such as Lennon & McCartney, Bob Dylan, Paul Simon, Joni Mitchell and Ray Davies, among others. One pure songwriter of that time, who was also a producer, arranger, recording artist and a performer, who was comfortable in the worlds of rock and also pre-rock artists such as Frank Sinatra, is Jimmy Webb. Webb has also continued performing, recording and writing songs and is not only one of the great songwriters of the rock era but he is also one of the few truly legendary songwriters of the past 50 years.

The songs that Webb has written constitute one of the singular most important songwriting catalogs in pop music history during the rock era. Some of the big hits that he wrote include “By The Time I Get to Phoenix,” “Up, Up and Away,” “The Worst That Could Happen,” “MacArthur Park,” “Wichita Lineman” and “Galveston.” There are also the songs that while they may not have been number-one pop hits, are classics and have been recorded countless times, such as “Didn’t We,” “The Moon Is A Harsh Mistress,” “Highwayman,” “All I Know,” “Sandy Cove,” “Cryin’ In My Sleep,” “If These Walls Could Speak,” “Adios,” and many more. It’s a remarkable sampling of compositions written by a man who was only 19 when his songs were first recorded in 1965. Webb’s songs have been covered by countless artists, from Frank Sinatra to Elvis Presley to R.E.M. Webb is the only person to win a Grammy for music, lyrics and arranging. “By The Time I Get To Phoenix” was the third-most performed song between 1940 and 1990. Webb is also the author of the erudite and definitive text on songwriting, Tunesmith, has been inducted into nearly every significant songwriting organization and has resided on the ASCAP board for more than ten years. Married in 2004 to WLIW’s Laura Savini, Webb now makes his home on Long Island in Bayville. He recently released Just Across the River (E1), which features some of his best-loved songs re-interpreted by such artists as Billy Joel, Willie Nelson, Vince Gill, Mark Knopfler, Linda Ronstadt and many others.

To interview Webb is not merely an exercise in his promoting a new CD. He is one of the great raconteurs. Intelligent, analytical, opinionated, passionate and filled with tantalizing tales of a life in music, Webb speaks in a friendly, easygoing manner that still resonates with his Southern upbringing and life at the center of the West Coast music scene of the late 60s and 70s. 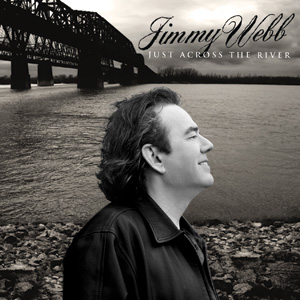 Webb began by talking about his new CD and the challenge of having some of his best-loved songs reinterpreted. “It’s very illuminating to get other artists involved in singing songs that are really fully ingrained in the public consciousness,” he stated. The CD was recorded in Nashville and the basic tracks were quickly cut in two days. “It was never conceived to be some sort of celebrity tour-de-force or marketing ploy,” Webb said about the all-star lineup. Webb was particularly touched by having Billy Joel involved in the project and said, “Billy Joel’s voice on ‘Wichita Lineman’ was very emotional for me.”

A common characteristic of Webb’s songs is the naming of a place, whether real or imagined as the song’s title or as key lyrics. Webb agreed that this is true and said, “It gives the listener a setting.” Webb added, “I tend to relate to things cinematically. I’m a film junkie. I’m always going to be looking at a film. I wish I could have been a big film scoring person.” Webb says that, as in a film, he uses “time, place and character and incorporates them in my songs.”

Webb talked very thoughtfully about the songwriting process and the recording process, discussing everyone from producer George Martin, to arranger Don Costa, to his 20-year friendship with Frank Sinatra. Of Ol’ Blue Eyes, Webb said, “In my mind he was a prince. He treated me like gold. He respected songwriters.”

After all these years, Webb realizes that songs are a lot more “longer lasting than I would have thought.” He added, “I’m more careful. I take a little bit more time.” Webb talked about the writing and recording of specific songs. About “MacArthur Park,” which was originally written for the Association, who chose to not record it, Webb recalled when Richard Harris first heard the song at the late actor’s London apartment. Webb, mimicking the England-based actor’s Irish accent, remembered Harris hearing the song, slapping a table and saying, “I’ll take that, Jimmy Webb. We’ll make a hit out of that.” Webb was going to work with Harris again, but the actor was so busy making films that it never happened. He died in 2002.

Webb is planning on doing a volume two of Just Across the River. He said he would love to work with Paul McCartney or Bruce Springsteen. He is also writing both a memoir and a musical. He will also continue to write the occasional piece for The New York Times or The Wall Street Journal.

In summing up where he lives in Bayville, Webb said, “It’s just a beautiful place to be.”