With the ball in his hands, Long Island fans made sure to keep their eyes on Tobias Harris. At Half Hollow Hills West, at Long Island Lutheran for his junior year and then back at Hills for his grand finale last winter, he was the best player on the floor and the best high school player much of the crowd had ever seen. It was must-see theater.

For a year anyway—maybe more but maybe not—Harris has taken his game to the University of Tennessee. He’s the highest-ranked recruit—fifth nationally—in the history of a program that counts Bernard King and Allan Houston among its alumni. UT is coming off an Elite Eight appearance and the Volunteer faithful are counting on its phenom to carry them deep into March again.

Harris is ready for the challenge.

“I’ve just been working on my jump shot, my defense and moving without the ball,” said Harris, who hails from Dix Hills. “I’m always trying to improve on my conditioning too. Every day I’m trying to do something to improve my game and help the team.”

As the football team flounders in Knoxville, the excitement builds around the men’s hoop team. The program isn’t steeped in history à la Kansas, Kentucky or Duke, but its fan base—more than 19,000 a night last year, on par with the Knicks—has grown to expect excellence. Much of that stems from Harris’ adaptation to the speed of the college game.

“There’s pressure, believe me,” Harris said. “We’re working hard in the gym and in practice. There are very high expectations.”

One mustn’t forget that Harris is barely 18 years old. He’s been ahead of the curve almost since he picked up a basketball—a smooth stroke from the perimeter, polished inside moves, good handle for a guy who measures 6-foot-8, 225 pounds. He can mix it up inside or pump in trifectas from every angle. Harris averaged 24.7 points, 14.4 rebounds and 3.3 blocks per game in heading Hills West to the Class AA state championship. He was named to the McDonald’s All-America Team and Mr. Basketball for the state of New York. If not for a foot injury suffered in the McDonald’s game, he would have played for the 2010 USA Basketball Junior National Select Team.

Even with the increased attention, he might actually find refuge on the court. In high school, he faced constant double teams and scored in spite of them. At UT, defending him will no doubt be a focus during the opposition’s film sessions, be it UConn (Jan. 22) or Kentucky (Feb. 8 and March 6). 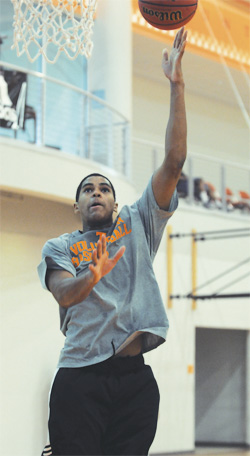 However, Harris has formidable allies who will force defenses to play him straight up. Scotty Hopson’s a former McDonald’s All-American himself. 6-foot-10, 275-pound Brian Williams, a Bronx native, is a load inside.

“We have the right pieces to win a national championship,” Harris said. “We’re working hard and I believe it can all pay off.”

Still, Harris could have gone anywhere. Kentucky, Louisville, Maryland, Syracuse and West Virginia were on his short list but he chose Tennessee. Not only did his game fit head coach Bruce Pearl’s up-tempo system but with the loss of four of the Vols’ top five leading scorers last year, Harris has immediately been thrust into the rotation.

“I bring a lot of things to the table,” said Harris. “It’s a great opportunity for me to improve as a player to win a national championship.”

He got a jumpstart on his college experience, taking a course over the summer in Knoxville. Harris is constantly on the go; he’s up at 6:30 to hit the gym and retires only after a day full of class—he’s a sport management major—studying and, of course, basketball. The Volunteers began their 20-hour practice weeks in mid-October. Harris, no stranger to hard work, admitted it takes time to create a sensible schedule while logging so much time on the floor.

“It’s important to be able to stay focused with college,” Harris said. “There are a lot of distractions.”

Basketball is his big ticket and it’s central among his family. His dad played at Duquesne and Murray State. His older sister, Tesia, is playing at St. John’s after transferring in from Hofstra. His cousin, Channing Frye, played at Arizona before becoming a lottery pick of the Knicks in 2005. His younger brother, Tyler, is a senior at LuHi and, as a top 100 recruit nationally, he’ll travel down the nerve-wracking recruiting path this year.

Harris hopes to have similar fortune as Frye. If rules still permitted, he insists he still would have gone the college route instead of jumping from high school to the pros, but with a year under his belt, would he then?

“It’s too early,” Harris said. “We’ll see how the season goes and how I do as an individual. If we win games and win a national championship, that opens up a lot of things.”

Long Islanders long watched in awe as Harris put up gaudy numbers and they’ll continue to have that opportunity, only in high definition rather than down the street. He is by no means a finished product and to test just how well he’s adapting to the college game, Pearl set up “the most challenging schedule we’ve ever had.” Harris aims to make the transition smoothly and then review his options.

“My goal is to play in the NBA, so I’m just going to keep working hard toward that goal,” he said.