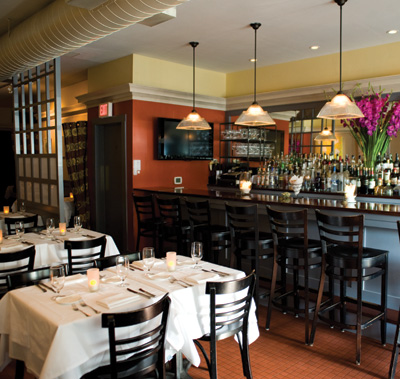 Small plates are sweeping through the restaurant world. There are many good reasons for their popularity. They offer diners more taste possibilities, give them a better chance to limit the cost of restaurant meals, encourage sharing and by cutting down on portion size, help diners who are watching their weight and waistline.

Formerly known as On3, a smoothly run restaurant in Glen Head, aware of this accelerating trend, decided to get on the small plate bandwagon, but with a twist. Instead of a wholesale change in their format and menu, they incorporated the less expensive, more diverse, portion controlled plates into their existing menu, retaining many (about 30%) of the entrée favorites of this already successful restaurant. Not dispensing with some of the dishes that got them where they were (seared tuna, vegetable lasagna, skirt steak, filet mignon, baby chicken), while adding bar bites ($5 to $7), some chilled plates ($9 to $16) and small hot plates ($6 to $12) to the mix.

At this point, it should be said that there’s more at work here than big, small or even middle sized plates. Fork and Vine, like its predecessor, is owned by Stuart Brown, its chef, who knows what he’s doing. The work of local artists adorns the walls, white cloth covers the tables, eye catching bouquets are scattered throughout the room, flickering candles and subdued lighting add to the cool, cozy, classy milieu. (There is also a charming outdoor garden dining area.)

Diners are greeted with warm rolls, salted butter, olive oil and tapenade. More importantly, meals are beautifully served. Our waiter always knew who ordered what, knew how to serve wine, was Johnny-on-the-spot when we needed him and invisible when we didn’t. He made intelligent suggestions and was observant. 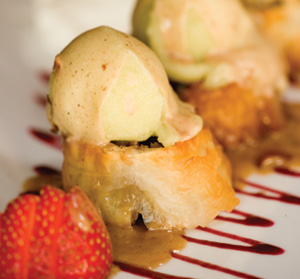 Three for instances: “There are four of you, but the sliders you ordered have three on the plate, can I add one?” When he noticed us sharing, small plates made an immediate appearance. And his single starter suggestion of “get the corn soup” was a winner. Every spoonful was like eating fresh liquid corn on the cob.

A bar bite of crusty grilled chorizo for a modest $5 is another recommended pick. But tempura zucchini wrapped goat cheese ($7) sounded more exotic and exciting than the blah, bland reality. A very tiny serving of black Mission figs, prosciutto and blue cheese generated intense taste, but at $12 was far from a best buy choice. Yet, it was the impressive 1946 sliders ($11) that set the stage for what was to come. Each of these tall, tender mini burgers enhanced by homemade ketchup and aged cheddar cheese is presented with a gherkin and a tiny, halved cherry tomato skewered to its top with a toothpick. They taste as good as they look. That was true for the roasted beet salad ($12) as well; its red and golden beets, arugula, shaved endive, smooth warm goat cheese, plus a few candied walnuts produced a pleasing array of colors, tastes and textures.

Two large plate entrées also held their own. Grilled vegetable lasagna ($16) with a trio of cheeses, vibrant plum tomato sauce and silken sautéed spinach generated more flavor than most vegetable dishes, and fish and chips ($16) proved to be a worthy version of the old standby because of its flaky, moist cod that’s lightly battered and greaseless cole slaw base and traditional malt vinegar and tartar sauce accompaniments. Unfortunately, its otherwise respectable chips (French fries) were limp rather than crisp. 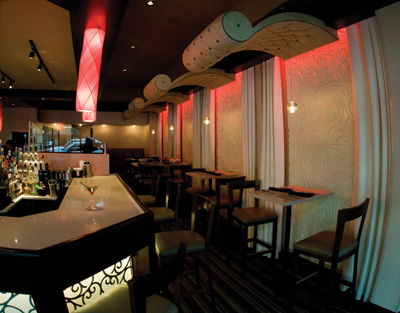 The busy corner of Middle Neck and Cutter Mill Roads in Great Neck has seen many a restaurant come and go. There were Mushrooms, Plaza Madrid, Sports Corner Café, The Living Room, and XO Bar and Restaurant. They all failed. Now comes Sip City with a completely different, very contemporary concept that features a menu of interesting international (European, African, Latino, Asian, American and Middle Eastern, etc.) dishes and at least as prominent, cocktails made with freshly squeezed fruit juices.

Sip City is a smallish, corner restaurant that’s dominated by a biggish bar illuminated by hanging red cylinder lighting. There, a mostly youngish crowd can choose from a beer list, a wine list and a sake list as well as an extensive array of those fresh squeezed juice cocktails. The emphasis on alcoholic drinks seems to draw those young people who gravitate toward the bar while the varied, diverse dishes seem to engender more interest among middle aged and older diners. Unfortunately the often too loud music can be heard by both groups and no doubt at least some of the teen oriented, hard driving rap and rock numbers are not considered appropriate dinner music by diners who want to converse.

At first glance, the no reservation Sip City, with plans to expand to Huntington and Babylon, seems less expensive than it is. That’s because of the significant price disparities on the ambitious menu. Those small plates are moderately priced in the $8 to $15 range but desserts all cost $10 although more upscale restaurants than Sip City often price them between $6 and $8. Additionally, the least expensive bottle of wine costs $28 and goes much higher than that for most selections. 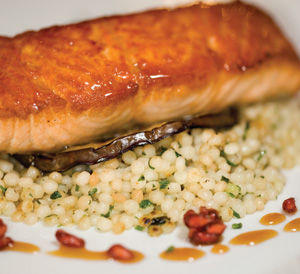 That means a table of four that gets four desserts and that lowest-priced bottle would have a $68 tab before ordering any of those small plates. So people who want to watch their wallets should stick to them and go easy or forget wine, cocktails ($10 and up) and sweets. Instead, munch on the complimentary bread sticks and olive oil that arrive at every table.

Then target some of the best of those small plates, most of which are also the simplest. Typical is the comforting, slow cooked beef brisket ($12) on a small scattering of white bean ragu boosted by a downright delicious Bourbon barbecue sauce. Not in the same class, but nevertheless recommended, is the plump, tasty duck leg confit ($15) perched on a garlic and white bean purée and the Singapore street noodles ($10). The latter wasn’t made with the feathery angel hair pasta I expected or a discernable curry underpinning but it was loaded with a generous, tasty helping of minced chicken, Napa cabbage, herbs and chilies. Duck Nachos ($10) get a really spicy kick from their chipotle raspberry sauce. But the African spiced shrimp were dry and boring, and the rare coriander crusted tuna ($15) was bland and in need of salt. Caesar salad ($12) and shrimp cocktail ($12) were standard stuff but three Maryland crab cakes ($12), with a tiny bit of first class remoulade sauce, sported nicely browned exteriors and well seasoned shredded crab interiors.

The not-to-miss dessert is the lollipops New York cheesecake style or dense, dark Belgian chocolate covered cheesecake accompanied by a luscious raspberry sauce. Pisang goreng, or warm banana fritters, aren’t anything special but there are a lot of them. Somewhat better is the small, warm, flaky apple and nut strudel crowned with vanilla bean gelato and the chocolate menage-a-trois, a shot glass of Godiva chocolate liquor, decadent dark chocolate gelato and a heavyish chocolate soufflé.

Our server was pleasant and well motivated. She tried to satisfy, but her inexperience showed at times as when she brought us shrimp rather than the tuna we requested, forgot some other dishes and had to ask us repeatedly about our order because she didn’t write anything down.